At only six light-years away, Barnard's star has fascinated exoplanet hunters since the 1960's, largely due to its extreme proximity to us. It is the closest single star to the sun and second closest stellar system only to the Alpha Centauri triple star system.

"Barnard's star is among the nearby red dwarfs that represents an ideal target to search for exoplanets that could someday actually be reached by future interstellar spacecraft," said co-author Steven Vogt, professor emeritus of astronomy and astrophysics at UC Santa Cruz. But the search for evidence of planets around this famous red dwarf star over the past 50 years has been unsuccessful, until now.

Artist's impression of a candidate planet orbiting Barnard's star under the orange tinted light from the red dwarf star. 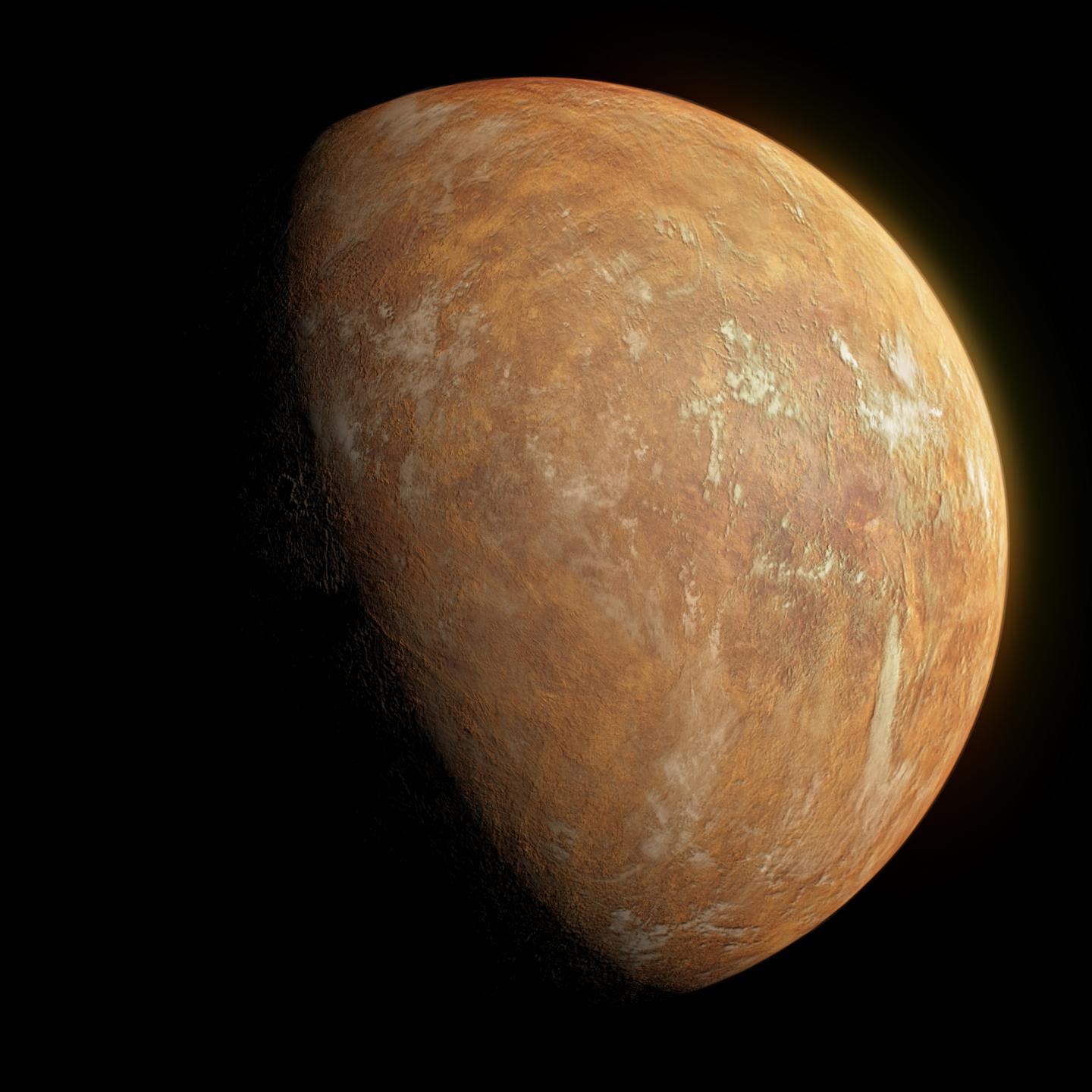 Measurements from high-precision instruments, including the High-Resolution Echelle Spectrometer (HIRES) at W. M. Keck Observatory in Hawaii, reveal that the candidate, named Barnard's star b (or GJ 699 b), is a cold super-Earth with a minimum of 3.2 Earth masses orbiting its red dwarf star every 233 days. This would place the planet at the so-called snow-line of the star, where it is likely to be a frozen world.

The team's results appear online in the November 14, 2018 issue of the journal Nature.

In the absence of an atmosphere, the planet's temperature is likely to be about -150 ºC, which makes it unlikely that the planet can support liquid water on its surface. However, its characteristics make it an excellent target for direct imaging using the next generation of instruments.

"This discovery means a boost to continue searching for exoplanets around our closest stellar neighbors, in hopes that eventually we will come upon one that has the right conditions to host life," said co-author Cristina Rodríguez-López, researcher at the Instituto de Astrofísica de Andalucía (IAA, CSIC).

Barnard's star appears to move across the Earth's night sky faster than any other star. Smaller and older than our sun, it is among the least active red dwarfs known. "It is the most common type of star in the galaxy--over 70 percent of Milky Way stars are like this dim, M dwarf star," Vogt said. "Though it is extremely close, Barnard's star is too faint to be seen with the naked eye."

However, detectable signals of a wobble from Earth-sized planets tugging on their host star are faint, and largely swamped by noise generated by the boiling surface activity of the stars themselves.

"We knew we would have to be patient. We followed Barnard's star for 16 long years at Keck, amassing some 260 radial velocities of Barnard's star by 2013," Vogt said. "Fortunately, our long-running Keck planet search program gave us the years we needed to gather enough precision radial velocity data with HIRES to begin to sense the presence of a planet."

In 2016, Vogt's European colleague Mikko Tuomi combined the team's HIRES data with publicly available data from the European Southern Observatory's UVES and HARPS spectrometers and began to see faint hints of a 230-day periodicity in the radial velocity data, indicative of a possible Earth-sized planet.

At that time, however, the signal was still too weak for the astronomers to claim it as significant and publish their findings. Redoubling their efforts, Vogt's team added 45 more radial velocity measurements from the newly commissioned Automated Planet Finder (APF) telescope at UC's Lick Observatory, 39 velocities from the Carnegie Institution for Science's Planet Finder Spectrograph (PFS) on the Magellan II Telescope at Las Campanas Observatory in Chile, and more data that became publicly available in recent years from HARPS. In each case, the additional data made the roughly 230-day signal grow stronger and more significant.

The final push came when Ribas's team decided to launch an intensive observing campaign from 2016 to 2017 aimed at confirming the suspected planet using CARMENES, a new planet-hunter spectrograph at Calar Alto Observatory in Spain.

"The additional data from CARMENES strongly confirmed the signal, and removed any lingering doubt as to the reality of this planet," Vogt said.

"For the analysis, we used observations from seven different instruments, spanning 20 years, making this one of the largest and most extensive datasets ever used for precise radial velocity studies. The combination of all data led to a total of 771 measurements," Ribas said.

A clear signal at a period of 233 days arose again in a re-analysis of all the measurements combined. This signal implies that Barnard's star is approaching and moving away from us at about 1.2 meters per second--approximately the walking speed of a person--and this motion is best explained as the result of a planet orbiting the star.

Artist's impression of the surface of the candidate planet orbiting Barnard's star. Data from a worldwide array of telescopes, including Keck Observatory in Hawaii, have revealed this frozen, dimly-lit world. The newly discovered super-Earth is the second closest known exoplanet to our planet and orbits the fastest moving star in the Earth's night sky. 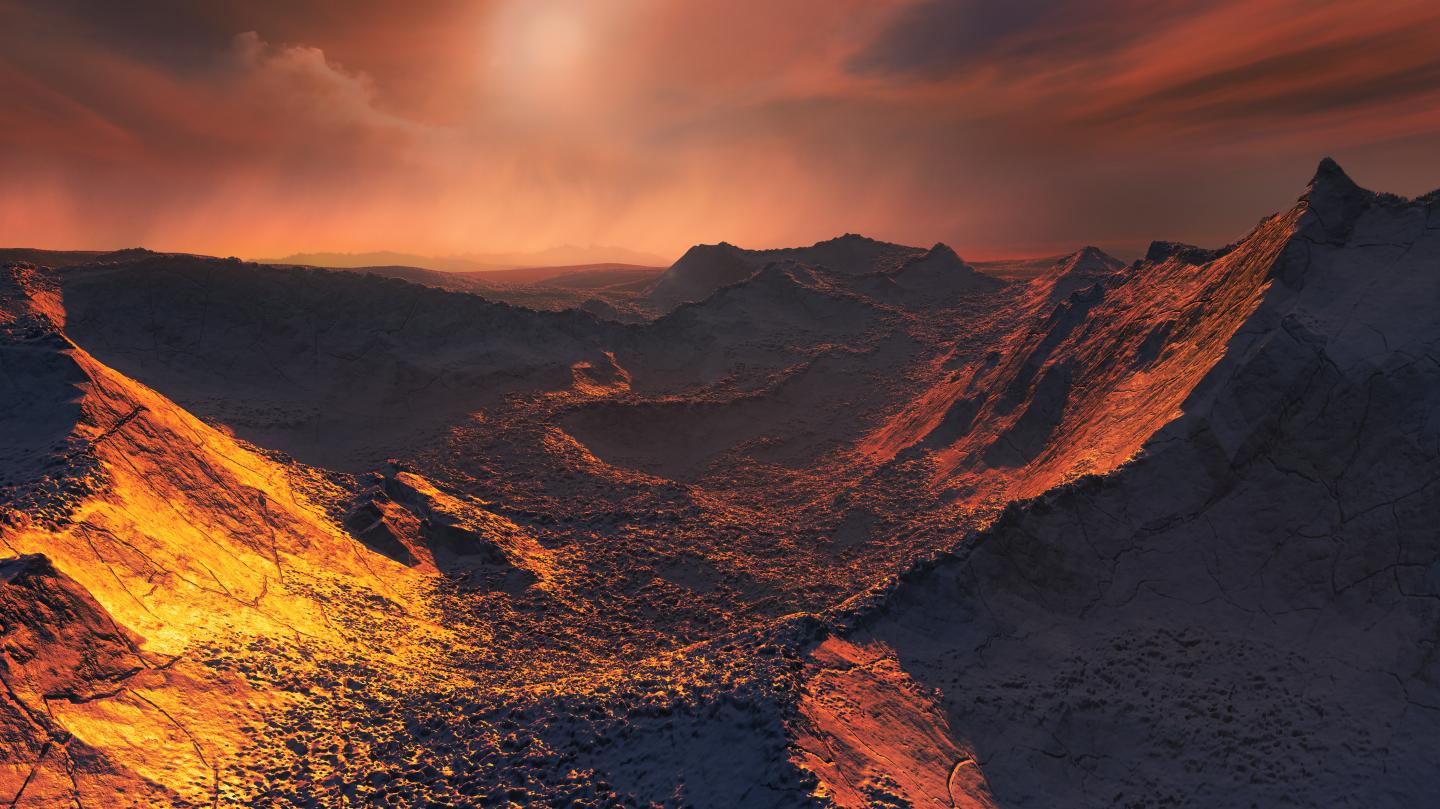 
"After a very careful analysis, we are over 99 percent confident that the planet is there, since this is the model that best fits our observations," said Ribas. "However, we must remain cautious and collect more data to nail the case in the future, because natural variations of the stellar brightness resulting from star spots can produce similar effects to the ones detected."

Follow-up observations of Barnard's star are already happening at different observatories. According to Vogt, the current data can rule out the presence of Jupiter-sized giant planets closer to the star, but there may be additional planets somewhat smaller than Earth-mass orbiting closer in that have not yet been detected.

Exoplanets so small and so far away from their parent star have not been discovered before using the radial velocity technique. This means that astronomers are getting better at finding these kinds of planets outside our solar system.

Graphic representation of the relative distances to the nearest stars from the sun. Barnard's star is the second closest star system, and the nearest single star to us. 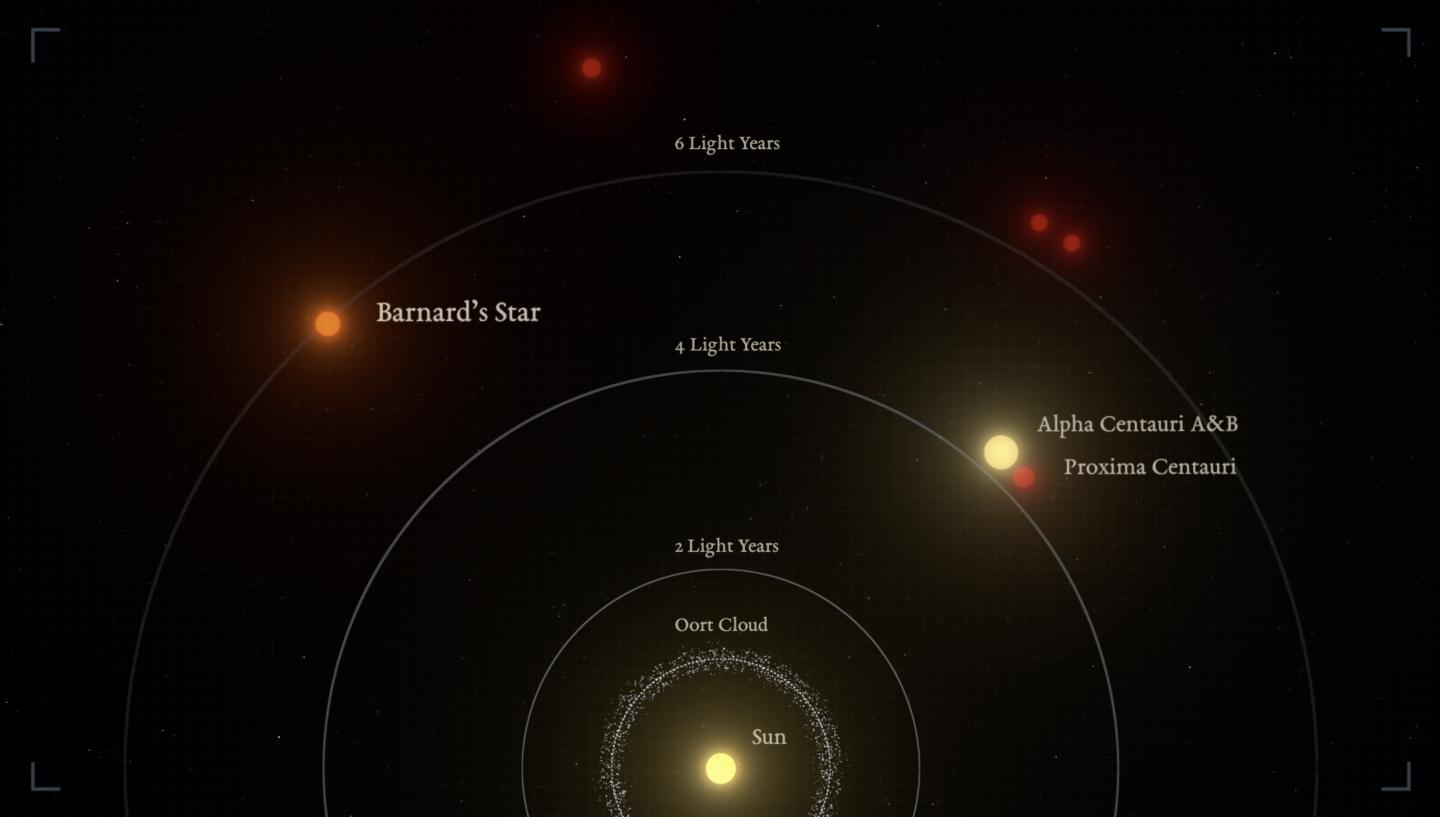 "We all have worked very hard on this result," said co-leader Guillem Anglada-Escude at Queen Mary University of London. "This is the result of a large collaboration organized in the context of the Red Dots project, which is why it has contributions from teams all over the world including semi-professional astronomers coordinated by the American Association of Variable Star Observers."

"Though the super-Earth we detected is much too cold to be likely habitable, it does underscore exoplanet statistics that confirm there are more planets in the universe than there are stars, and more potentially habitable Earth-sized planets than grains of sand on all the beaches on our planet!" said Vogt.

The High-Resolution Echelle Spectrometer (HIRES) produces spectra of single objects at very high spectral resolution, yet covering a wide wavelength range. It does this by separating the light into many "stripes" of spectra stacked across a mosaic of three large CCD detectors. HIRES is famous for finding exoplanets. Astronomers also use HIRES to study important astrophysical phenomena like distant galaxies and quasars, and find cosmological clues about the structure of the early universe, just after the Big Bang.