An analysis of information shared on Twitter during the 2016 U.S. presidential election has found that automated accounts -- or "bots" -- played a disproportionate role in spreading misinformation online.

The study, conducted by Indiana University researchers and published Nov. 20 in the journal Nature Communications, analyzed 14 million messages and 400,000 articles shared on Twitter between May 2016 and March 2017, a period that spans the end of the 2016 presidential primaries and the presidential inauguration on Jan. 20, 2017.

This image shows the spread of an article that claimed 3 million illegal immigrants voted in the 2016 U.S. presidential election. The links show the article's spread through retweets and quoted tweets, in blue, and replies and mentions, in red. 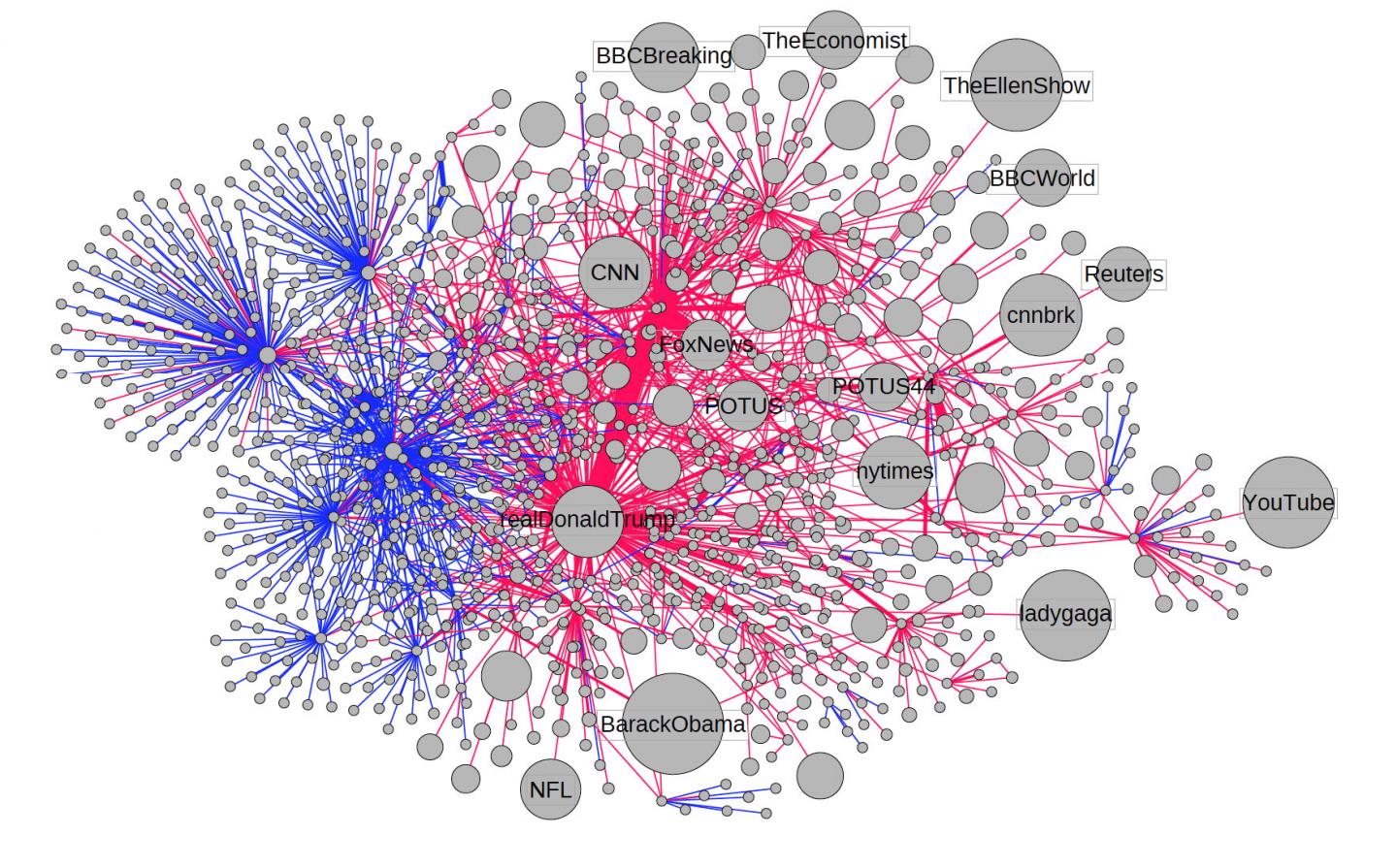 The study also found that bots played a major role promoting low-credibility content in the first few moments before a story goes viral.

The brief length of this time -- 2 to 10 seconds -- highlights the challenges of countering the spread of misinformation online. Similar issues are seen in other complex environments like the stock market, where serious problems can arise in mere moments due to the impact of high-frequency trading.

"This study finds that bots significantly contribute to the spread of misinformation online -- as well as shows how quickly these messages can spread," said Filippo Menczer, a professor in the IU School of Informatics, Computing and Engineering, who led the study.

The analysis also revealed that bots amplify a message's volume and visibility until it's more likely to be shared broadly -- despite only representing a small fraction of the accounts that spread viral messages.

"People tend to put greater trust in messages that appear to originate from many people," said co-author Giovanni Luca Ciampaglia, an assistant research scientist with the IU Network Science Institute at the time of the study. "Bots prey upon this trust by making messages seem so popular that real people are tricked into spreading their messages for them."

Information sources labeled as low-credibility in the study were identified based upon their appearance on lists produced by independent third-party organizations of outlets that regularly share false or misleading information. These sources -- such as websites with misleading names like "USAToday.com.co" -- include outlets with both right- and left-leaning points of view.

The researchers also identified other tactics for spreading misinformation with Twitter bots. These included amplifying a single tweet -- potentially controlled by a human operator -- across hundreds of automated retweets; repeating links in recurring posts; and targeting highly influential accounts.

For instance, the study cites a case in which a single account mentioned @realDonaldTrump in 19 separate messages about millions of illegal immigrants casting votes in the presidential election -- a false claim that was also a major administration talking point.

The researchers also ran an experiment inside a simulated version of Twitter and found that the deletion of 10 percent of the accounts in the system -- based on their likelihood to be bots -- resulted in a major drop in the number of stories from low-credibility sources in the network.

"This experiment suggests that the elimination of bots from social networks would significantly reduce the amount of misinformation on these networks," Menczer said.

The study also suggests steps companies could take to slow misinformation spread on their networks. These include improving algorithms to automatically detect bots and requiring a "human in the loop" to reduce automated messages in the system. For example, users might be required to complete a CAPTCHA to send a message.

Although their analysis focused on Twitter, the study's authors added that other social networks are also vulnerable to manipulation. For example, platforms such as Snapchat and WhatsApp may struggle to control misinformation on their networks because their use of encryption and destructible messages complicates the ability to study how their users share information.

"As people across the globe increasingly turn to social networks as their primary source of news and information, the fight against misinformation requires a grounded assessment of the relative impact of the different ways in which it spreads," Menczer said. "This work confirms that bots play a role in the problem -- and suggests their reduction might improve the situation."

This work was supported in part by National Science Foundation, the James S. McDonnell Foundation and the Democracy Fund.