In most animal societies, members of one sex dominate those of the other. Is this, as widely believed, an inevitable consequence of a disparity in strength and ferocity between males and females? Not necessarily. A new study on wild spotted hyaenas shows that in this social carnivore, females dominate males because they can rely on greater social support than males, not because they are stronger or more competitive in any other individual attribute. The main reason for females having, on average, more social support than males is that males are more likely to disperse and that dispersal disrupts social bonds.

The study by scientists of the Leibniz Institute for Zoo and Wildlife Research (Leibniz-IZW, Germany) and the Institut des Sciences de l'Evolution de Montpellier (ISEM, France) was published in the journal Nature Ecology & Evolution.

Spotted hyena females are often portrayed as archetypes of powerful and ferocious females. They are on average heavier than the males, have highly masculinised outer genitalia (a 'pseudo-penis' and a 'pseudo-scrotum'), and usually occupy the highest position in the society. But according to the new study, it is not their manliness that allows them to dominate males. "When two hyaenas squabble, the one that can rely on greater social support wins, irrespective of sex, body mass or aggressiveness", explains Oliver Hoener, head of the Ngorongoro Hyena Project of the Leibniz-IZW.

These are spotted hyenas. 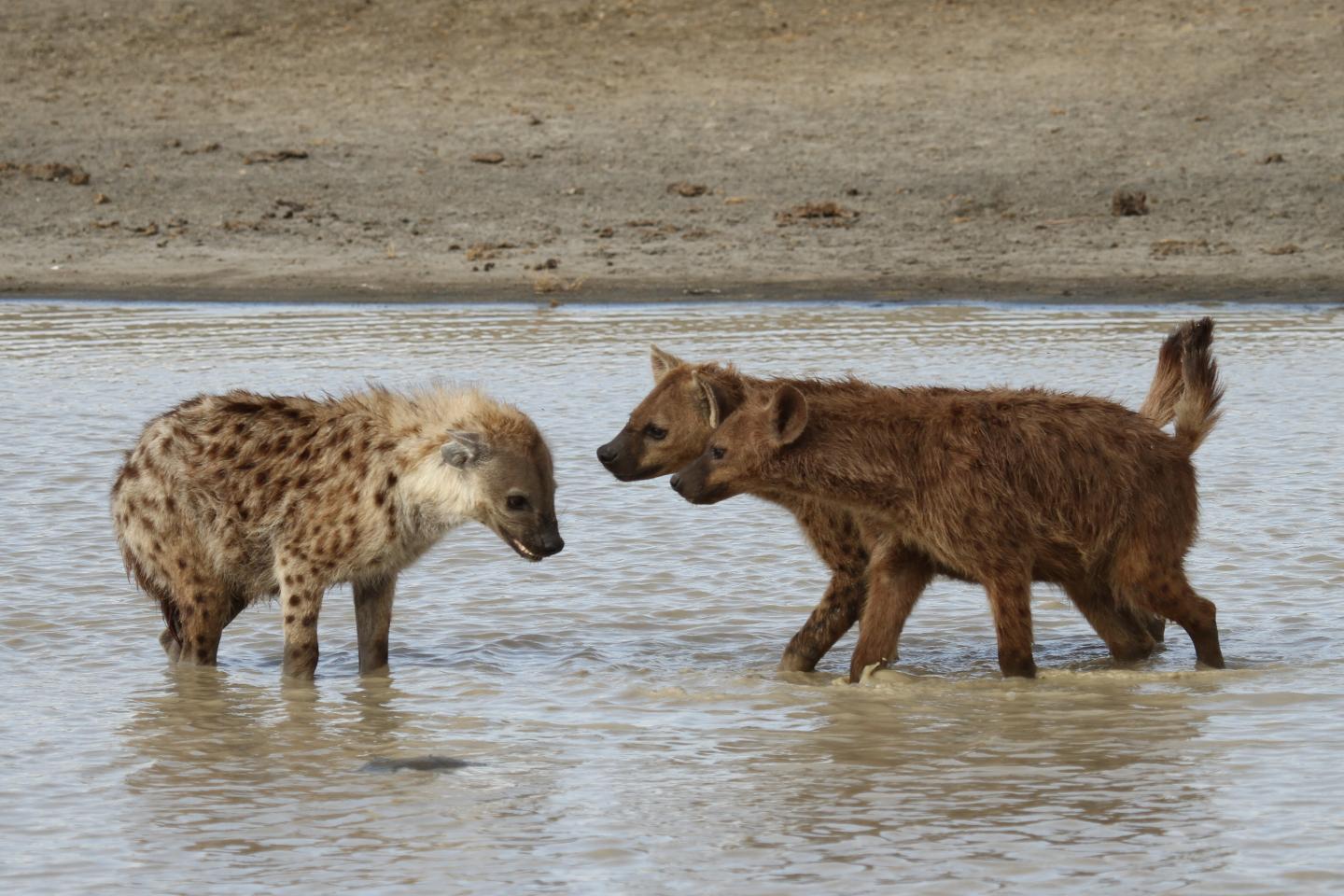 Differences in social support between two individuals correctly predicted who will be the dominant in almost all encounters and in all contexts - between natives and immigrants, members of the same and different clans, residents and intruders, and individuals of the same and opposite sex. Female dominance thus emerges from females being more likely to receive greater social support than males. "What is so fascinating is that it all works without any direct involvement of other hyaenas," says Colin Vullioud, Hoener's colleague at Leibniz-IZW and first author of the study. "In the end, it's all about assertiveness and how confident a hyaena is of receiving support if needed."

For their study, the scientists analysed the outcome of 4133 agonistic interactions between 748 hyaenas from eight different clans monitored for 21 years in the Ngorongoro Crater in Tanzania. To estimate potential social support, they developed an algorithm that predicted for each clan member, which of two interacting hyaenas it would support; this algorithm was derived from behavioural observations of social support and relatedness estimates based on one of the most comprehensive pedigrees of a free-ranging mammal. "To tease apart the effects of social support and intrinsic attributes such as body mass, one needs to evaluate each effect while controlling for the presence of the other" explains Francois Rousset (ISEM), who has developed statistical methods for such purposes. "When this is done, the effects of sex and body mass appear negligible".

In many social contexts, female and male hyaenas can rely on equal social support and are equally likely to win. But there is one exception: when natives interact with immigrant clan members. "Hyaena society is highly nepotistic and social support is primarily given to kin. Native clan members live among their relatives and have a competitive advantage over immigrants because immigrants lose their social bonds when they disperse from home" explains Eve Davidian (Leibniz-IZW), co-first author of the study. "In this context, females have the upper hand because immigrants are usually males."

"Identifying the determinants of dominance relationships between the sexes is fundamental to understanding the evolution of reproductive strategies, gender roles, and sexual conflicts", concludes Alexandre Courtiol (Leibniz-IZW), co-senior author of the study. "Our findings show that social dominance of one sex over the other - a trait that characterises gender roles - does not need to be a direct consequence of sex or physical strength, but can be shaped by the social environment." By demonstrating the key role of social support in mediating the establishment of dominance - and sex-biased dominance - the study improves our understanding of the social impact of nepotism, political alliances, as well as emigration and immigration patterns in animal and human societies.