An international team of scientists has discovered a new, massive star system--one that also challenges existing theories of how large stars eventually die.

"This system is likely the first of its kind ever discovered in our own galaxy," says Benjamin Pope, a NASA Sagan fellow at New York University's Center for Cosmology and Particle Physics and one of the researchers.

Specifically, the scientists detected a gamma-ray burst progenitor system--a type of supernova that blasts out an extremely powerful and narrow jet of plasma and which is thought to occur only in distant galaxies.

This is an image of Apep captured at 8 microns in the thermal infrared with the VISIR camera on the European Southern Observatory's VLT telescope, Mt Paranal, Chile. 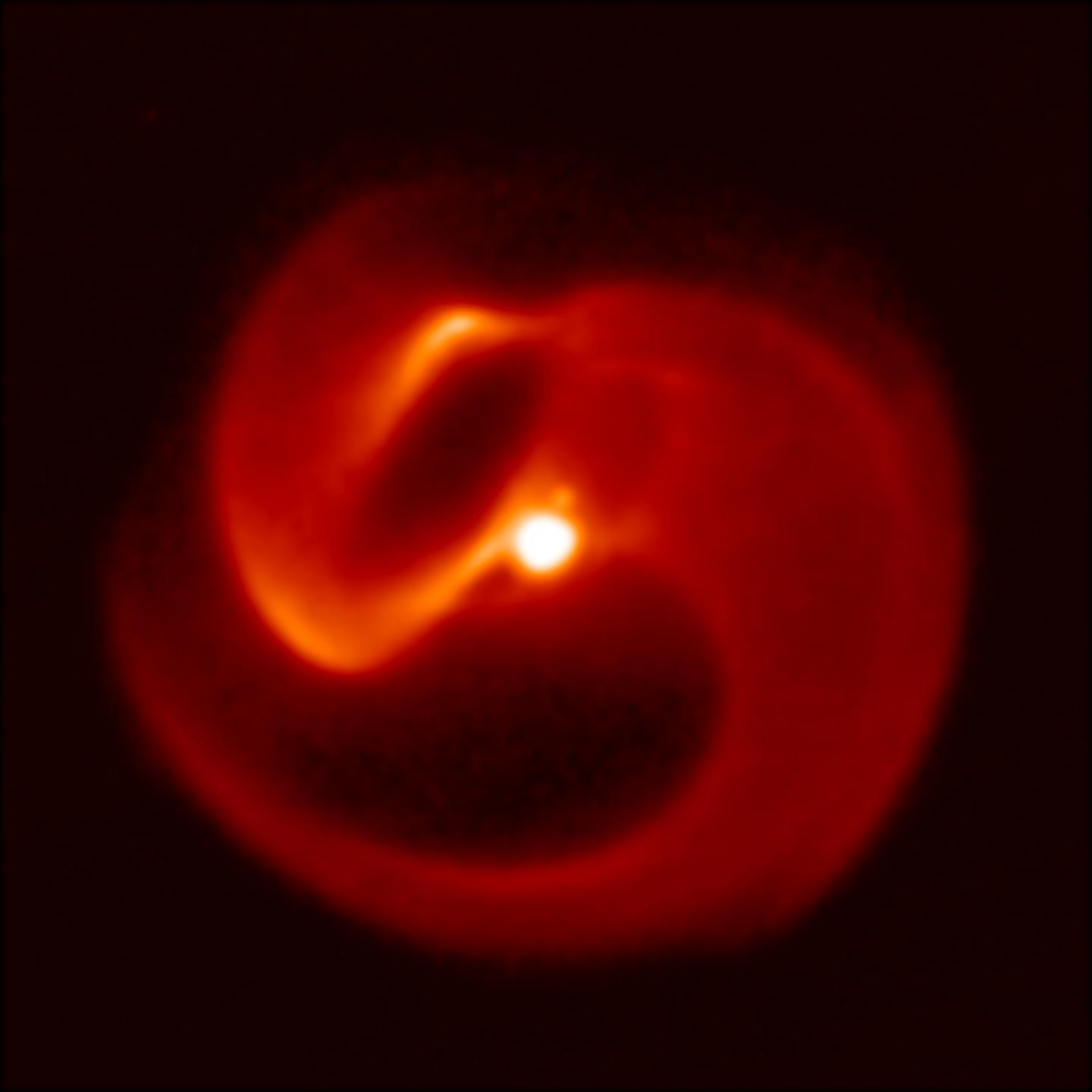 "It was not expected such a system would be found in our galaxy--only in younger galaxies much further away," adds Pope. "Given its brightness, it is surprising it was not discovered a lot sooner."

The system, an estimated 8,000 light years away Earth, is adorned with a dust "pinwheel"-- whose strangely slow motion suggests current theories on star deaths may be incomplete.

This image is a composite of data collected from the near-infrared camera (NACO) together with longer wavelength data in the thermal infrared (from the VISIR instrument). Both instruments are on the European Southern Observatory's VLT telescopes, Mt Paranal, Chile. The mulit-colour collage renders the central stars of the system in blue-white at the core, with the fainter companion to the North and a bit West of the heart of the system (actually, another binary so close that it can't be resolved here). Surrounding this triple star is the extended dust plume, about 12 arcseconds across, rendered in orange-red. The thermal infrared radiation coming from this elegantly coiled tail is believed to arise from a vast plume of warm dust streaming out into space. When the most massive stars in our universe near the end of their lives, they produce fast winds--typically moving at more than 1,000 kilometers per second--that carry away large amounts of a star's mass. These fast winds should carry away the star's rotational energy and slow it down long before it dies.

"These massive stars are often found with a partner, in which the fast winds from the dying star can collide with its companion to produce a shock that emits at X-ray and radio frequencies and produces exotic dust patterns," explains Joseph Callingham, a postdoctoral fellow at the Netherlands Institute for Radio Astronomy and lead author of the paper.

This animated gif is intended to illustrate the geometry of the structure that we have witnessed in the Apep system. From a single image, it is harder to understand the 3-D structure. The central binary (only: not the wider Northern companion in the triple) is illustrated as the blue star at the center. The geometry given is that believed typical for a Wolf-Rayet colliding pinwheel system: that is an optically thin dust plume distributed over the surface of a cone that is dictated by the colliding winds. The whole outflow structure is wrapped into a spiral by the orbital motion of the presumed central binary. Further the dust formation has a specific onset and cessation, which truncate the spiral at the outer and inner limits (for example, giving rise to the notable elliptical hole). Note this is a toy animation to illustrate a fly-around of the structure, and not a model fitted to the data that describes the dust flow process. The looping animation proceeds for about half an orbit (say roughly 60 years) with a pause at about the present epoch. Note that the motion we actually recorded with VISIR in the real data only spans 3 years.

"Apep's dust pinwheel moves much slower than the wind in the system," he adds. "One way this can occur is if one of the massive stars is rotating so quickly that it is nearly tearing itself apart. Such a rotation means that when it runs out of fuel and begins to explode as a supernova, it will collapse at the poles before the equator, producing a gamma-ray burst."

The work was performed, in part, under contract with the Jet Propulsion Laboratory, funded by NASA through the Sagan Fellowship Program, which is executed by the NASA Exoplanet Science Institute.

For more on the discovery of Apep and how the scientists came to understanding of the system outlined in the paper, please visit Nature's "Behind the Paper" blog postt : https://astronomycommunity.nature.com/users/sign_in.