Astronomers have gleaned some of the best data yet on the composition of a planet known as HR 8799c--a young giant gas planet about 7 times the mass of Jupiter that orbits its star every 200 years.

The team used state-of-the art instrumentation at the W. M. Keck Observatory on Maunakea, Hawaii to confirm the existence of water in the planet's atmosphere, as well as a lack of methane.

While other researchers had previously made similar measurements of this planet, these new, more robust data demonstrate the power of combining high-resolution spectroscopy with a technique known as adaptive optics, which corrects for the blurring effect of Earth's atmosphere.

The HR 8799 planetary system is the first solar system beyond our own that astronomers directly imaged. Captured in 2008 using Keck Observatory's near-infrared adaptive optics, the picture revealed three planets (labeled 'b', 'c', and 'd') orbiting a dusty young star named HR 8799 (center). In 2010, the team announced they detected a fourth planet in the system (labeled 'e'). The HR 8799 system is located 129 light-years away from Earth. 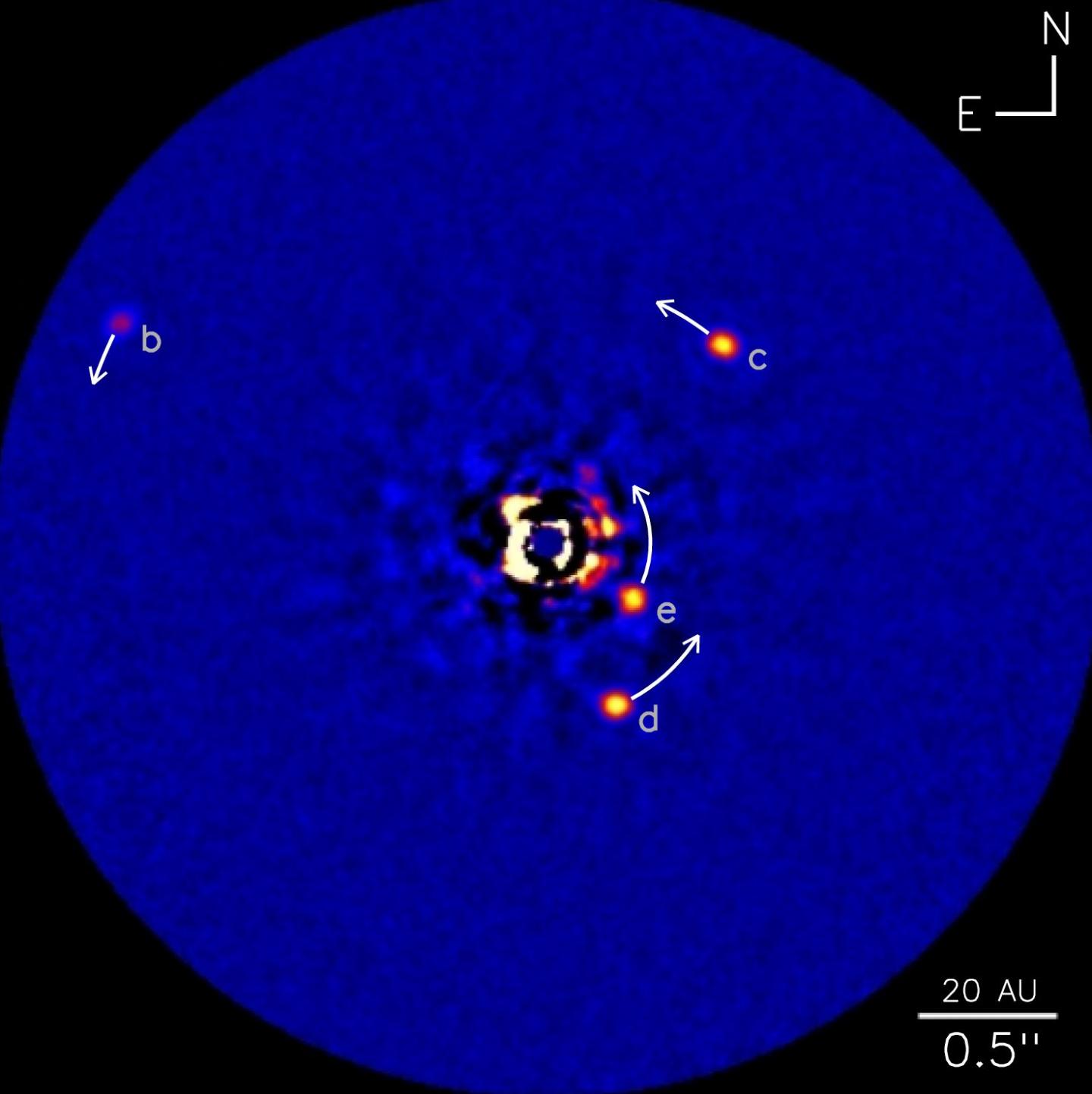 "This type of technology is exactly what we want to use in the future to look for signs of life on an Earth-like planet. We aren't there yet but we are marching ahead," says Dimitri Mawet, an associate professor of astronomy at Caltech and a research scientist at JPL, which Caltech manages for NASA.

Mawet is co-author of a new paper on the findings published today in the Astronomical Journal. The lead author is Ji Wang, formerly a postdoctoral scholar at Caltech and now an assistant professor at Ohio State University.

Taking pictures of planets that orbit other stars--exoplanets--is a formidable task. Light from the host stars far outshines the planets, making them difficult to see.

More than a dozen exoplanets have been directly imaged so far, including HR 8799c and three of its planetary companions. In fact, HR 8799 is the only multiple-planet system to have its picture taken. Discovered using adaptive optics on the Keck II telescope, the direct images of HR8799 are the first-ever of a planetary system orbiting a star other than our sun.

Once an image is obtained, astronomers can use instruments, called spectrometers, to break apart the planet's light, like a prism turning sunlight into a rainbow, thereby revealing the fingerprints of chemicals. So far, this strategy has been used to learn about the atmospheres of several giant exoplanets.

The next step is to do the same thing only for smaller planets that are closer to their stars (the closer a planet is to its star and the smaller its size, the harder is it to see).

The ultimate goal is to look for chemicals in the atmospheres of Earth-like planets that orbit in the star's "habitable zone"--including any biosignatures that might indicate life, such as water, oxygen, and methane.

Mawet's group hopes to do just this with an instrument on the upcoming Thirty Meter Telescope, a giant telescope being planned for the late 2020s by several national and international partners, including Caltech.

But for now, the scientists are perfecting their technique using Keck Observatory --and, in the process, learning about the compositions and dynamics of giant planets.

"Right now, with Keck, we can already learn about the physics and dynamics of these giant exotic planets, which are nothing like our own solar system planets," says Wang.

In the new study, the researchers used an instrument on the Keck II telescope called NIRSPEC (near-infrared cryogenic echelle spectrograph), a high-resolution spectrometer that works in infrared light.

They coupled the instrument with Keck Observatory's powerful adaptive optics, a method for creating crisper pictures using a guide star in the sky as a means to measure and correct the blurring turbulence of Earth's atmosphere.

This is the first time the technique has been demonstrated on directly imaged planets using what's known as the L-band, a type of infrared light with a wavelength of around 3.5 micrometers, and a region of the spectrum with many detailed chemical fingerprints.

"The L-band has gone largely overlooked before because the sky is brighter at this wavelength," says Mawet. "If you were an alien with eyes tuned to the L-band, you'd see an extremely bright sky. It's hard to see exoplanets through this veil."

This is an artist's impression based on published scientific data on the HR 8799 solar system. The magenta, HR 8799c planet is in the foreground. Compared to Jupiter, this gas giant is about seven times more massive and has a radius that is 20 percent larger. HR 8799c's planetary companions, d and b are in the background, orbiting their host star. 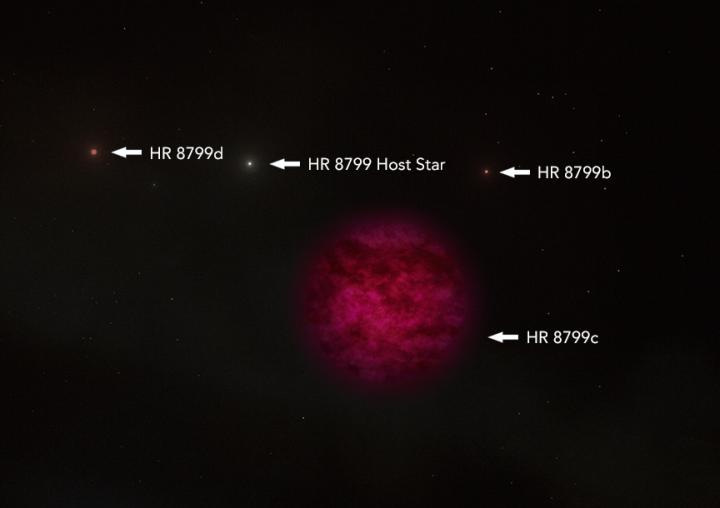 Credit: W. M. Keck Observatory/Adam Makarenko/C. Alvarez
The researchers say that the addition of adaptive optics made the L-band more accessible for the study of the planet HR 8799c. In their study, they made the most precise measurements yet of the atmospheric constituents of the planet, confirming it has water and lacks methane as previously thought.

"We are now more certain about the lack of methane in this planet," says Wang. "This may be due to mixing in the planet's atmosphere. The methane, which we would expect to be there on the surface, could be diluted if the process of convection is bringing up deeper layers of the planet that don't have methane."

The L-band is also good for making measurements of a planet's carbon-to-oxygen ratio--a tracer of where and how a planet forms. Planets form out of swirling disks of material around stars, specifically from a mix of hydrogen, oxygen, and carbon-rich molecules, such as water, carbon monoxide, and methane.

These molecules freeze out of the planet-forming disks at different distances from the star--at boundaries called snowlines. By measuring a planet's carbon-to-oxygen ratio, astronomers can thus learn about its origins.

Mawet's team is now gearing up to turn on their newest instrument at Keck Observatory, called the Keck Planet Imager and Characterizer (KPIC). It will also use adaptive optics-aided high-resolution spectroscopy but can see planets that are fainter than HR 8799c and closer to their stars.

"KPIC is a springboard to our future Thirty Meter Telescope instrument," says Mawet. "For now, we are learning a great deal about the myriad ways in which planets in our universe form."

The Near-Infrared Spectrograph (NIRSPEC) is a unique, cross-dispersed echelle spectrograph that captures spectra of objects over a large range of infrared wavelengths at high spectral resolution. Built at the UCLA Infrared Laboratory by a team led by Prof. Ian McLean, the instrument is used for radial velocity studies of cool stars, abundance measurements of stars and their environs, planetary science, and many other scientific programs. A second mode provides low spectral resolution but high sensitivity and is popular for studies of distant galaxies and very cool low-mass stars. NIRSPEC can also be used with Keck II's adaptive optics (AO)system to combine the powers of the high spatial resolution of AO with the high spectral resolution of NIRSPEC. Support for this project was provided by the Heising-Simons Foundation. Learn more at http://www.heisingsimons.org.

W. M. Keck Observatory is a distinguished leader in the field of adaptive optics (AO), a breakthrough technology that removes the distortions caused by the turbulence in the Earth's atmosphere. Keck Observatory pioneered the astronomical use of both natural guide star (NGS) and laser guide star adaptive optics (LGS AO) on large telescopes and current systems now deliver images three to four times sharper than the Hubble Space Telescope. Keck AO has imaged the four massive planets orbiting the star HR8799, measured the mass of the giant black hole at the center of our Milky Way Galaxy, discovered new supernovae in distant galaxies, and identified the specific stars that were their progenitors. Support for this technology was generously provided by the Bob and Renee Parsons Foundation, Change Happens Foundation, Gordon and Betty Moore Foundation, Mt. Cuba Astronomical Foundation, NASA, NSF, and W. M. Keck Foundation.