Nearly a thousand years ago, a famous king created a famous book, later given the title “Domesday” (pronounced “doomsday”).

At least that’s been the common story: William the Conqueror, 20 years after his 1066 invasion of England from Normandy, ordered a massive survey of his new realm. One year later, he got a book with the results – a record of the nation’s wealth and resources, everything from property to sheep to servants. 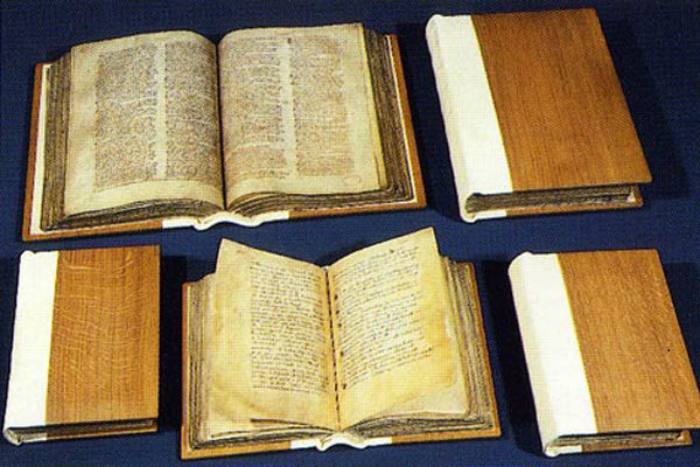 The “Great Domesday Book,” as it was later named, is perhaps the most famous document in English history after the Magna Carta.

The book’s origin story, however, had not been thoroughly investigated until University of Illinois history professor Carol Symes took up the task. “What had never been resolved is how this massive text was really created,” Symes said, “and in this incredibly narrow timeframe.”

Now, after years of research, Symes makes the case in the journal Speculum that the final “Great Domesday Book” came years and perhaps decades later than the 1087 date to which it’s attributed, also the year of William’s death.

It also was not the orderly bureaucratic enterprise that’s often assumed, but instead “enabled hundreds of thousands of individuals and communities to air grievances and to make their own ideas of law and justice a matter of public record,” Symes wrote.

A booklet from the “Exeter Domesday Book.” 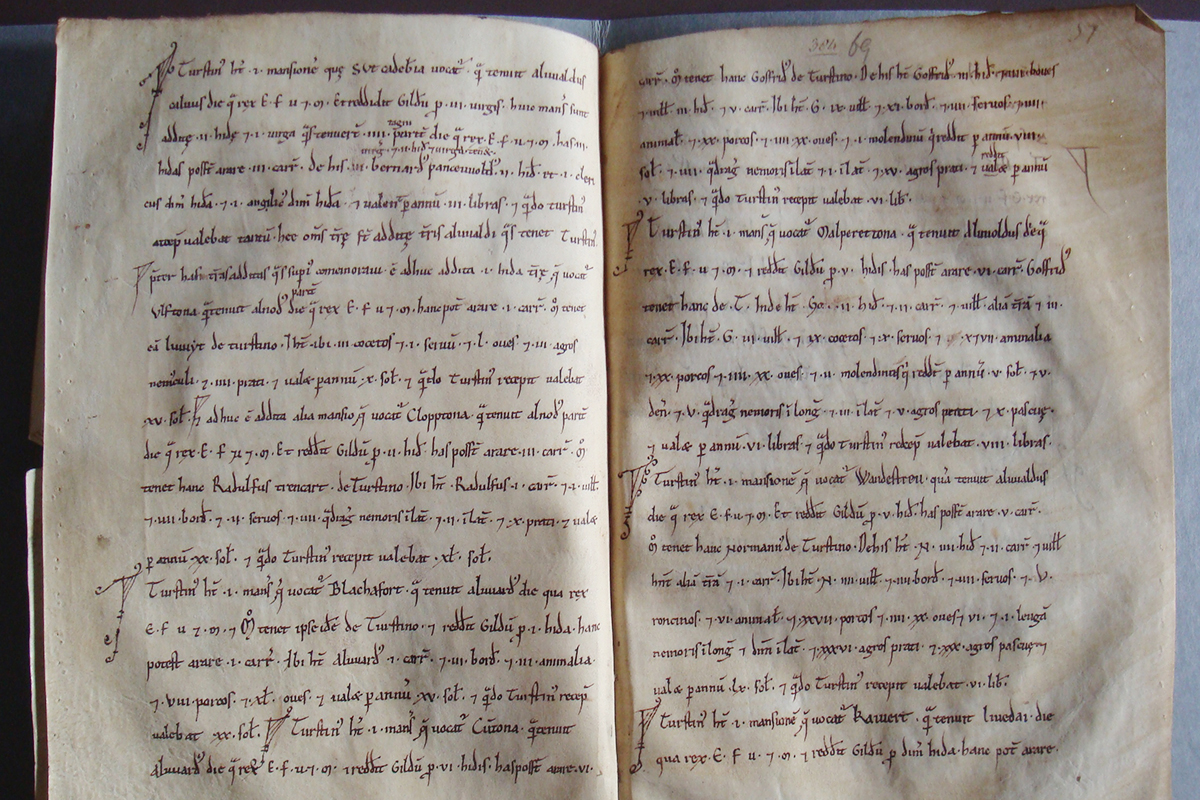 “This is documentation of the trauma of conquest. We’re watching people pushing back, or at least letting their voices be heard because they're fed up,” she said. In one example, the text records townspeople bitterly complaining about the leveling of houses to build a castle.

“We need to rethink what has seemed to be a rather straightforward, top-down royal project, but is revealed to be the tip of a big, monstrous iceberg that involves the agency of many historical actors and often preserves their voices. This helps to tell a very different story about one of the landmark events of England – the Norman conquest and its aftermath – that is not just a story about ‘the great man.’”

The universe of the “Domesday Book” is complicated, to say the least. The name is attached to two different bodies of text, “Great Domesday” and “Little Domesday” – the first covering all of the country’s shires except three in the southeast, the second covering those three, but in more detail, suggesting it was an earlier draft.

There’s also “Exeter Domesday,” a collection of 103 booklets that appears to be an even earlier draft of survey results, mostly covering three shires in the southwest.

Curiously, London does not appear in any of these records, which likely is a sign its citizens either ignored the inquest or overwhelmed it with grievances, Symes said.

Roll fragment from the abbey at Burton-upon-Trent. 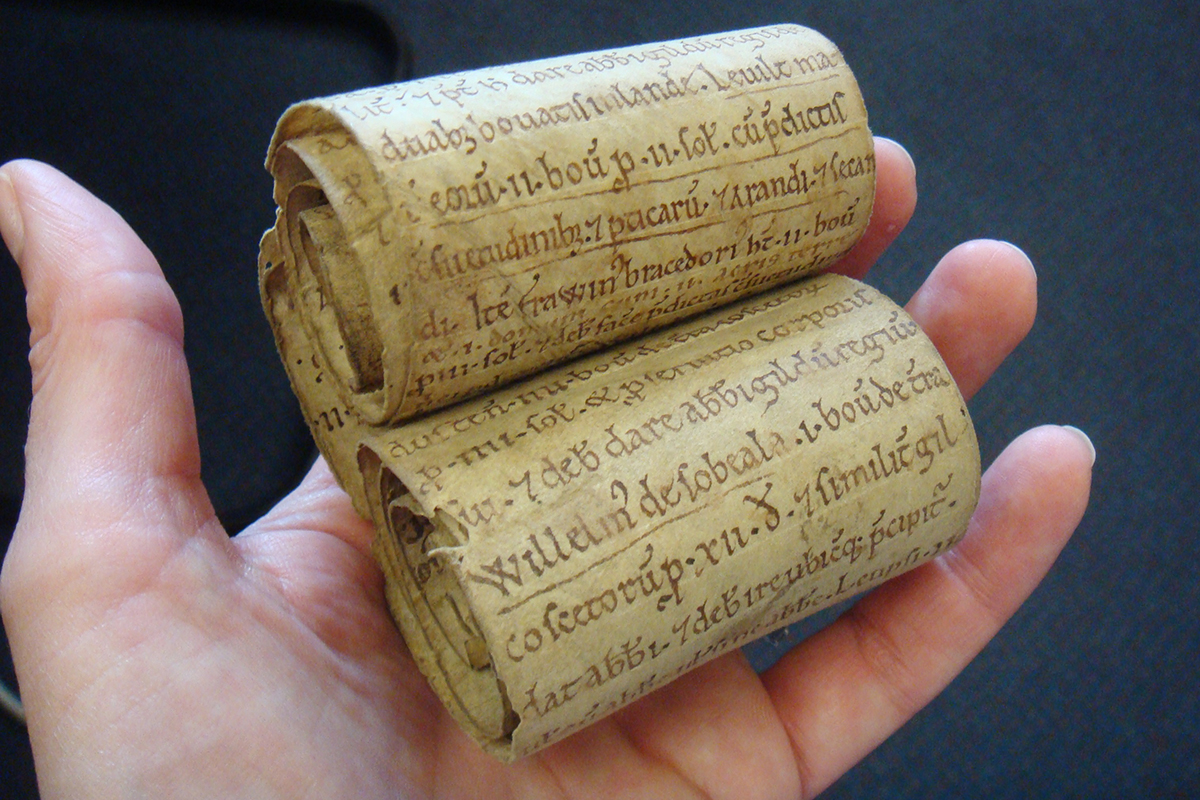 The Exeter collection is just one of many “satellite” documents that have some connection with the survey or book but have received little scholarly attention, Symes said. For many who focus their research on “Great Domesday,” the book has been “the sun around which everything else spins.”

Among Symes’ contributions is to suggest ways that the different texts relate to each other, since that hasn’t been clear. “I think I have figured out the workings behind how this book (“Great Domesday”) was made,” she said.

Most of Symes’ research focused on the Exeter collection and another satellite document, a small fragment of parchment roll, perhaps the oldest in England, from an abbey at Burton-on-Trent in the northwest of the country. In both cases, she examined the original documents.

The Exeter documents provide numerous clues on how “Great Domesday” was assembled, but also serve as a window on the people and the process. A bishop can be seen intervening with the king’s advisers when his property is not recorded. Teenage scribes make drinking plans in the marginal notes of manuscripts.

Foundation charter for the abbey at Burton-upon-Trent. 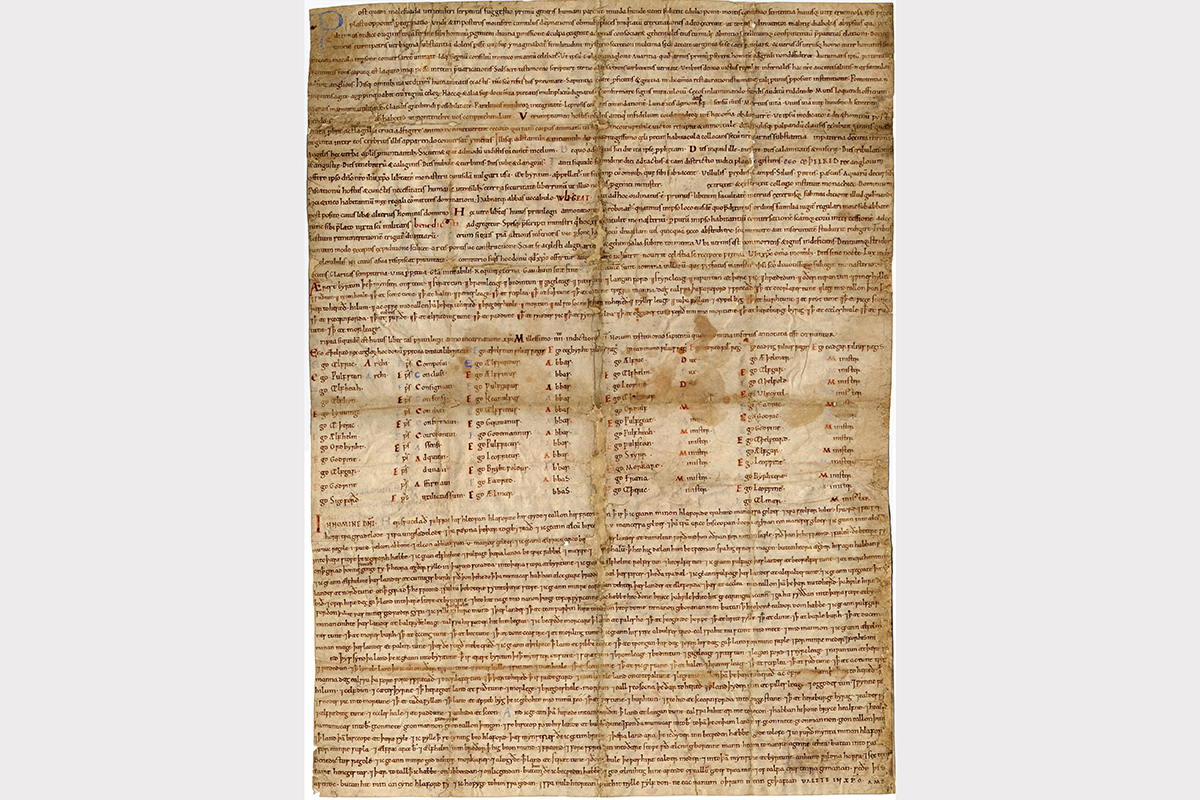 The abbey’s parchment fragment, however, is key to Symes’ contention that the final book came years and even decades later. She ties its contents to the comings and goings of a man who served at one time as its abbot, who had access to the survey data that went into “Domesday” and may even have been involved in the survey.

“It plugs a huge hole that we had in our evidence. It suggests that the process of creating the thing we call ‘Great Domesday’ actually took a lot longer than people had thought.”

Symes said she was attracted to this particular book as part of her interest in medieval manuscripts, especially the complex ways in which they were “mediated” – i.e., written, handled, copied, recopied, added to, edited, interpreted and heard by audiences, all in an age before the printing press. Historians need to take a text’s complex mediation into account, she said, even considering the parchment on which it was written, to fully understand and not misinterpret it.

Symes also likes messiness – finding out “how the sausage gets made.” She was attracted to Domesday, in part, “because it’s a messy document that people pretend is not messy. It’s taken to be this pristine, transparent thing when it’s not.”

One value in the Domesday research, she said, is in “realizing that the people of almost a thousand years ago were real people with real human emotions and needs. We’re putting on a different set of glasses to look at these sources, and what we see is all those people who were written out of the record. We’re getting to see and hear them again.”

The “wonderful irony,” Symes said, is that we can do that through one of the most famous books created in the Middle Ages, by a king.


Contacts and sources:
Craig Chamberlain
University of Illinois at Urbana-Champaign