New Maps Hint at How Electric Fish Got Their Big Brains

In a new study published in the Nov. 15 issue of Current Biology, researchers report that the cerebellum — pictured here in blue — is bigger in members of the mormyrid family compared to related fish. The enlarged region of the brain may be associated with the use of weak electric discharges to locate prey and to communicate with one another. 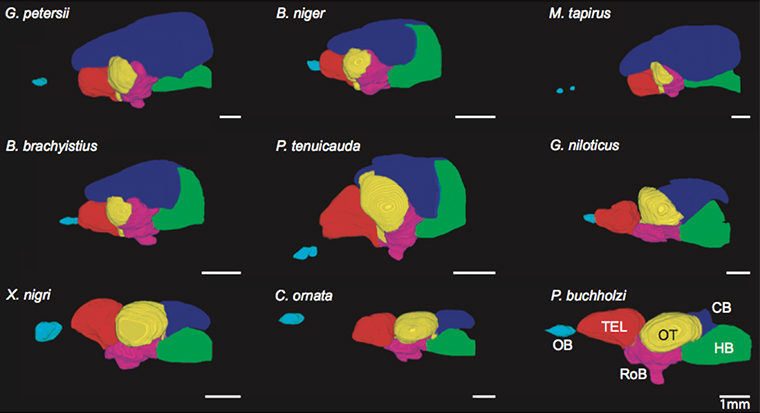 
Helmet-heads of the freshwater fish world, African mormyrid fishes are known for having a brain-to-body size ratio that is similar to humans.

But there’s actually a great deal of variation in the size of mormyrid brains. These differences provide an opportunity to look at what’s behind the bulk.There are more than 200 species of mormyrids. /' 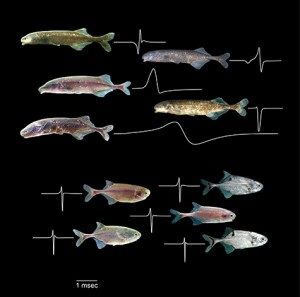 Researchers from Washington University in St. Louis have mapped the regions of the brain in mormyrid fish in extremely high detail. In a new study published in the Nov. 15 issue of Current Biology, they report that the part of the brain called the cerebellum is bigger in members of this fish family compared to related fish — and this may be associated with their use of weak electric discharges to locate prey and to communicate with one another.

The size finding in itself is not particularly surprising for those who follow this fish, said Bruce Carlson, professor of biology in Arts & Sciences. “It had almost become a truism,” he said. In mormyrids, at least, the thinking went, “big brains mean big cerebellums.”

Instead, the researchers are charged up about how their new measurements can help illuminate longstanding questions in neuroanatomy.


“When you look at human brains, the cerebral cortex has become this giant part that has engulfed the other regions of the brain,” said Kimberley V. Sukhum, first author of the new study, who recently completed her PhD in biology at Washington University. She works as a postdoctoral researcher at Washington University School of Medicine in St. Louis.

“We see something similar with the cerebellum in the mormyrids,” Sukhum said. “But it wasn’t known how this region had gotten so big — or even if all of the species had a very big cerebellum.”

There are more than 200 species of mormyrids. Some have been studied extensively because of their special electrosensory systems. Researchers long sought answers as to how these fish use electrical pulses for communication and way-finding. Other species in the mormyrid family have been largely ignored.

For this analysis, Carlson and Sukhum chose to compare individuals from six mormyrid species, one species that was considered a close relative, and three other distantly related fish species.

Sukhum and Carlson used micro-CT technology to collect full scans of the soft tissue of the fishes’ brains, then painstakingly identified the landmarks that delineated distinct regions within them. The 3D maps they created allowed them to measure and compare the volume of individual regions of the brain with great precision.

In other words, electric fish had significantly bigger cerebellums than fish with no zip. Electric fish also had bigger hindbrains than their related, non-electric cousins.

If one part of the brain can be shown to size up or size down independent of other parts of the brain, then neuroanatomists said this is an example of something called mosaic evolution. Mosaic shifts are thought to be relatively rare, and much of the current research on this topic is focused on identifying the kinds of situations in nature where such shifts occur.

Some of the mormyrids that they measured had extremely large brains — up to three times bigger than the smallest-brained mormyrids in the study. Despite this difference in total size, there was no evidence of mosaic changes in the cerebellum within the group. This is evidence that mosaic shifts are not just the result of evolving a big brain. Instead, the shifts are likely related to the evolution of novel traits, such as the electrosensory system.

This study cannot say for sure why mormyrids have such big cerebellums — only that they do.

But Carlson has a hunch. He thinks this part of the brain might be doing the lion’s share of the mormyrid’s work with motor planning, and also with how the fish anticipates the sensory feedback it will receive as it moves about and sends out electrical pulses.

“There’s a lot more planning and consequences to deal with than for your average fish,” Carlson said.