Mars Moon Got Its Grooves from Rolling Stones

A new study bolsters the idea that strange grooves crisscrossing the surface of the Martian moon Phobos were made by rolling boulders blasted free from an ancient asteroid impact.

The research, published in Planetary and Space Science, uses computer models to simulate the movement of debris from Stickney crater, a huge gash on one end of Phobos' oblong body. The models show that boulders rolling across the surface in the aftermath of the Stickney impact could have created the puzzling patterns of grooves seen on Phobos today.

"These grooves are a distinctive feature of Phobos, and how they formed has been debated by planetary scientists for 40 years," said Ken Ramsley, a planetary science researcher at Brown University who led the work. "We think this study is another step toward zeroing in on an explanation."

Much of Phobos' surface is covered with strange linear grooves. New research bolsters that idea the boulders blasted free from Stickney crater (the large depression on the right) carved those iconic grooves. 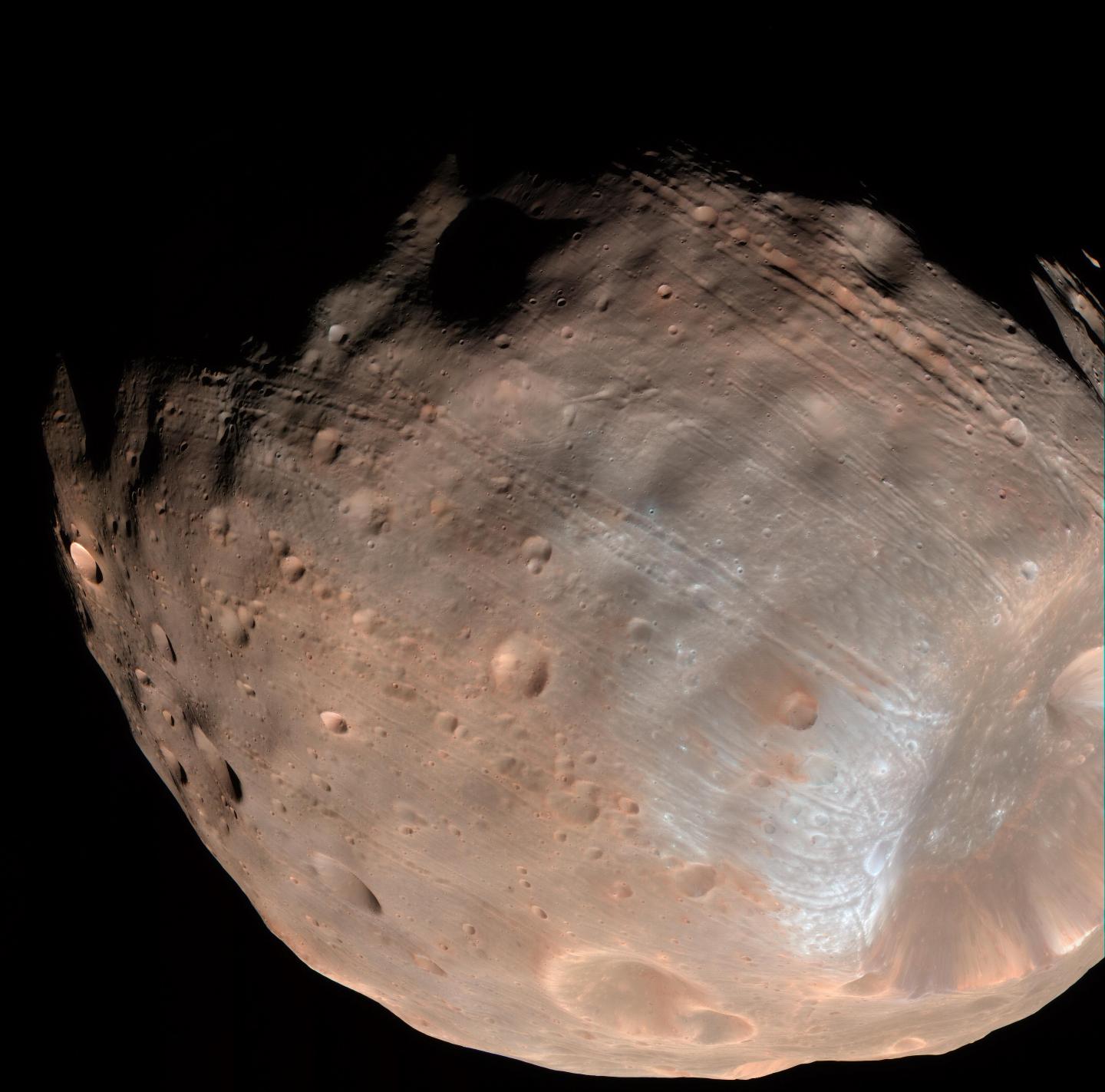 Phobos' grooves, which are visible across most of the moon's surface, were first glimpsed in the 1970s by NASA's Mariner and Viking missions. Over the years, there has been no shortage of explanations put forward for how they formed. Some scientists have posited that large impacts on Mars have showered the nearby moon with groove-carving debris. Others think that Mars' gravity is slowly tearing Phobos apart, and the grooves are signs of structural failure.

Still other researchers have made the case that there's a connection between the grooves and the Stickney impact. In the late 1970s, planetary scientists Lionel Wilson and Jim Head proposed the idea that ejecta -- bouncing, sliding and rolling boulders -- from Stickney may have carved the grooves. Head, a professor in Brown's department of Earth, Environmental and Planetary Sciences, was also a coauthor of this new paper.

For a moon the size of the diminutive Phobos (27 kilometers across at its widest point), Stickney is a huge crater at 9 kilometers across. The impact that formed it would have blown free tons of giant rocks, making the rolling boulder idea entirely plausible, Ramsley says. But there are also some problems with the idea.

For example, not all of the grooves are aligned radially from Stickney as one might intuitively expect if Stickney ejecta did the carving. And some grooves are superposed on top of each other, which suggests some must have already been there when superposed ones were created. How could there be grooves created at two different times from one single event? What's more, a few grooves run through Stickney itself, suggesting that the crater must already have been there when the grooves formed. There's also a conspicuous dead spot on Phobos where there are no grooves at all. Why would all those rolling boulders just skip one particular area?

To explore those questions, Ramsley designed computer models to see if there was any chance that the "rolling boulder model" could recreate these confounding patterns. The models simulate the paths of the boulders ejected from Stickney, taking into account Phobos' shape and topography, as well as its gravitational environment, rotation and orbit around Mars.

Ramsley said he had no expectations for what the models might show. He wound up being surprised at how well the model recreated the groove patterns seen on Phobos.

"The model is really just an experiment we run on a laptop," Ramsley said. "We put all the basic ingredients in, then we press the button and we see what happens."

The models showed that the boulders tended to align themselves in sets of parallel paths, which jibes with the sets of parallel grooves seen on Phobos. The models also provide a potential explanation for some of the other more puzzling groove patterns.

Researchers used computer models to trace the possible path of boulders ejected from Stickney crater on Mars' moon Phobos. The simulations showed that boulders could have carved the iconic grooves seen on Phobos' surface. 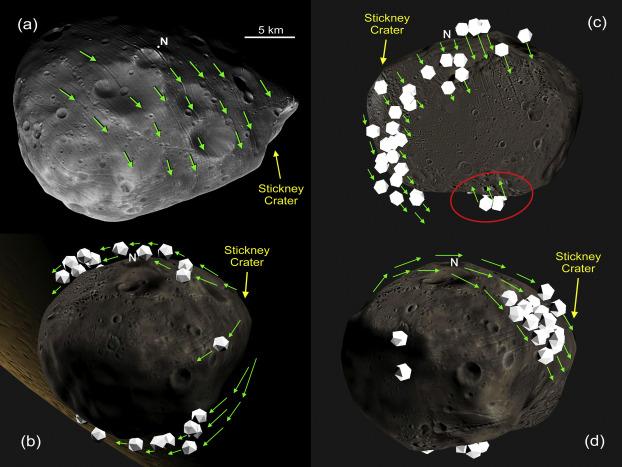 The simulations show that because of Phobos' small size and relatively weak gravity, Stickney stones just keep on rolling, rather than stopping after a kilometer or so like they might on a larger body. In fact, some boulders would have rolled and bounded their way all the way around the tiny moon. That circumnavigation could explain why some grooves aren't radially aligned to the crater. Boulders that start out rolling across the eastern hemisphere of Phobos produce grooves that appear to be misaligned from the crater when they reach the western hemisphere.

That round-the-globe rolling also explains how some grooves are superposed on top of others. The models show that grooves laid down right after the impact were crossed minutes to hours later by boulders completing their global journeys. In some cases, those globetrotting boulders rolled all the back to where they started -- Stickney crater. That explains why Stickney itself has grooves.

Then there's the dead spot where there are no grooves at all. That area turns out to be a fairly low-elevation area on Phobos surrounded by a higher-elevation lip, Ramsley says. The simulations showed that boulders hit that lip and take a flying leap over the dead spot, before coming down again on the other side.

Researchers used computer models to simulate the path of ejecta from Stickney crater on Mars' moon Phobos. The simulations show how boulders take a flying leap over one particular area of Phobos, explaining why it's devoid of grooves.

"It's like a ski jump," Ramsley said. "The boulders keep going but suddenly there's no ground under them. They end up doing this suborbital flight over this zone."

All told, Ramsley says, the models answer some key questions about how ejecta from Stickney could have been responsible for Phobos' complicated groove patterns.

"We think this makes a pretty strong case that it was this rolling boulder model accounts for most if not all the grooves on Phobos," Ramsley said.