Fur Trade May Have Spread the Plague through Europe Repeatedly

A new ancient DNA study shows that 14th century plague outbreaks might have resulted from repeated introductions of Yersinia pestis to Europe. Commercial trade routes, including the fur trade routes, would have contributed to the rapid spread of plague in whole Europe during the Middle Ages.

The bacteriumYersinia pestisis the causative agent of bubonic and pulmonary plague in humans. Plague is primarily a disease of wildlife and is maintained in reservoirs, which nowadays are present on all continents with the exception of Australia and Western Europe.

The fur trade from the East towards Western Europa followed two major routes during the Middle Ages. 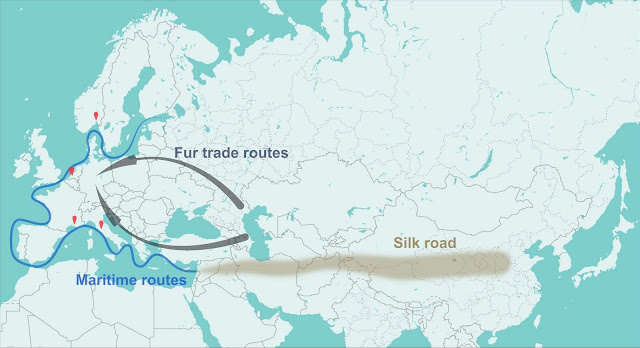 Without doubt, the Black Death, which marks the arrival of Y. pestisinto Europe in 1347, represents one of the most significant events that marked the beginning of the second plague pandemic during the medieval period. In fact, from 1347 to 1353, plague spread through whole Europe like wildfire, leading to the decline of the European population by 30 %. After this dramatic period and for more than 350 years, Europe knew a series of recurrent devastating outbreaks ofY. pestis.

Understanding the plague
During the last decades, different studies tried to understand the origin of these outbreaks. Two hypotheses emerged from these studies. According to the first hypothesis, after a first introduction during the Black Death, one or more reservoirs ofY. pestiswere established in Western Europe – which explains these recurrent outbreaks.

“The other hypothesis suggest that the plague was repeatedly introduced to Western Europe from a reservoir located in Eastern Europe/Central Asia and spread via commercial trade routes and human movement”, explains Professor Nils Chr. Stenseth. He was the leader of the Centre for Ecological and Evolutionary Synthesis (CEES) at the University of Oslo for more than 10 years, and is now a strategic advisor at the UiO’s Faculty of Mathematics and Natural Sciences.

In a new paper from the CEES, published in PNAS, these two scenarios are investigated using five newly presented ancient genomes (aDNA) of Y. pestis isolated from skeletons distributed in archaeological sites from South (Abbadia San Salvatore, Italy and Saint-Laurent-de-la-Cabrerisse, France) to North Europe (Bergen-op-Zoom in the Netherlands and Oslo, Norway). The ancient genomes from Abbadia San Salvatore and Oslo are the first ancient DNA sequences reported from Italy and Norway.

The Second Pandemic
Contrary to previous studies, the authors built an integrative approach aiming at interpreting all ancient genomes of the Second plague Pandemic with regards to their historical context. A total number of 126 Y. pestis strains and fifteen ancient genomes were analysed in this study. Five out of the eleven ancient DNA samples dated to the Second Plague Pandemic were part of the first wave of introduction of Y. pestis into Europe during the Black Death.

These ancient DNA samples were isolated from the cities of Abbadia San Salvatore (Italy), Saint-Laurent-de-la-Cabrairisse (France), Barcelona (Spain), London (United Kingdom) and Oslo (Norway). Intriguingly, all these ancient genomes were identical except the one isolated from Abbadia San Salvatore, for which the authors found two extra point mutations.

Historical data investigation of contacts and bed testaments conducted by the authors revealed the high percentage of people killed by plague within four months from late June to early September 1348 in Abbadia San Salvatore. CEES researcher Amine Namouchi and colleagues advance in their paper that these two additional point mutations were acquired through a large transmission chain in Italy, rather than having been gained within a newly established local wildlife reservoir. Regarding the aDNA found in Oslo, the authors found that it is most likely dated to 1348. This is in line with historical, archeological and radiocarbon dating data described in their paper.

In fact, during the same period a new mainland route connecting Sarai, Tana and Caffa had been established with the support of theGolden Horde, observes Amine Namouchi and colleagues. The Golden Horde was originally a Mongol and later Turkicized khanate established in the 13th century and originating as the northwestern sector of the Mongol Empire. The Crimean Khanate and the Kazakh Khanate, the last remnants of the Golden Horde, survived until 1783 and 1847 respectively.
Just after the Black Death period, the authors confirm the so-calledpestis secundathat occured from 1357 to 1366.

“The group of aDNA that belongs to thepestis secundaincludes samples from London, Bolgar-City (Russia) and the newly presented two aDNA from Bergen-op-Zoom. Four point mutations separate the group of aDNA of the Black Death from the group that belongs to thepestis secunda. Corroborated with historical data, we claim that thepestis secundamight also be the result of the introduction ofY. pestisalong the fur trade routes established between Novgorod (Russia) and Western Europe through the Hanseatic League”, adds Namouchi.

Multiple waves of introduction
Overall, in this new paper published in PNAS, by describing all previously and newly described aDNA ofY. pestisin their historical context, Namouchi and colleagues provided additional evidence that the recurrent plague outbreaks during the Second plague Pandemic were the result of multiple waves of introduction of Y. pestis from a reservoir located in Eastern Europe/Central Asia.
This result is in line with previous studies based on Ecological evidence. Commercial trade routes, including the fur trade route, as-well-as human movement would have contributed to the rapid spread of plague in whole Europe during the Middle Ages.

The investigation behind the new scientific paper was done in the context of the research projectMedPlag, led by the paleogenetist and CEES researcher Barbara Bramanti. In 2013, she received an Advanced Grant from the European Research Council (ERC). The grant is being used to investigate, using DNA technology, the plague and other potential human diseases caused by medieval microbes.
https://titan.uio.no/node/3133