Based on computer simulations and new observations from the Atacama Large Millimeter/submillimeter Array (ALMA), researchers have found that the rings of gas surrounding active supermassive black holes are not simple donut shapes. Instead, gas expelled from the center interacts with infalling gas to create a dynamic circulation pattern, similar to a water fountain in a city park.

ALMA image of the gas around the supermassive black hole in the center of the Circinus Galaxy. The distributions of CO molecular gas and C atomic gas are shown in orange and cyan, respectively. 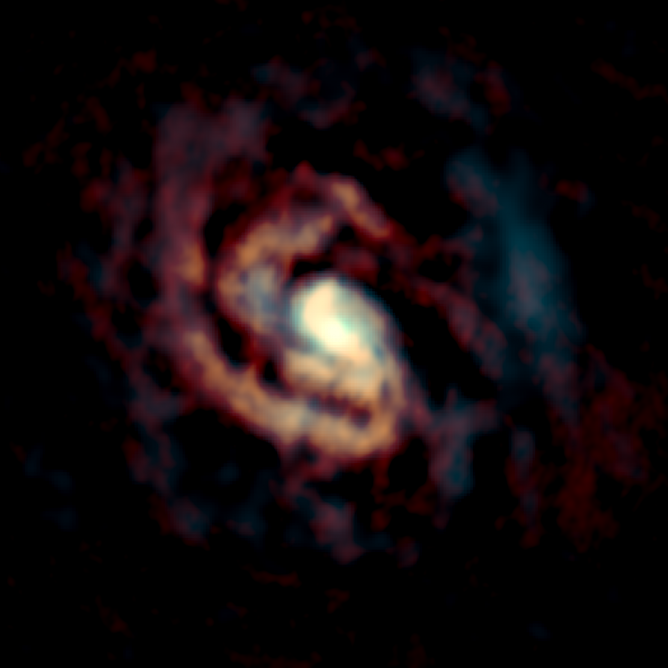 Most galaxies host a supermassive black hole, millions or billions of times as heavy as the Sun, in their centers. Some of these black holes swallow material quite actively. But astronomers have believed that rather than falling directly into the black hole, matter instead builds up around the active black hole forming a donut structure.

Takuma Izumi, a researcher at the National Astronomical Observatory of Japan (NAOJ), led a team of astronomers that used ALMA to observe the supermassive black hole in the Circinus Galaxy located 14 million light-years away from the Earth in the direction of the constellation Circinus. The team then compared their observations to a computer simulation of gas falling towards a black hole made with the Cray XC30 ATERUI supercomputer operated by NAOJ. This comparison revealed that the presumptive “donut” is not actually a rigid structure, but instead a complex collection of highly dynamic gaseous components. First, cold molecular gas falling towards the black hole forms a disk near the plane of rotation.

As it approaches the black hole, this gas is heated until the molecules break down into the component atoms and ions. Some of these atoms are then expelled above and below the disk, rather than being absorbed by the black hole. This hot atomic gas falls back onto the disk creating a turbulent three dimensional structure. These three components circulate continuously, similar to a water fountain in a city park.

Artist’s impression of the gas motion around the supermassive black hole in the center of the Circinus Galaxy. The three gaseous components form the long-theorized “donut” structure: (1) a disk of infalling dense cold molecular gas, (2) outflowing hot atomic gas, and (3) gas returning to the disk. 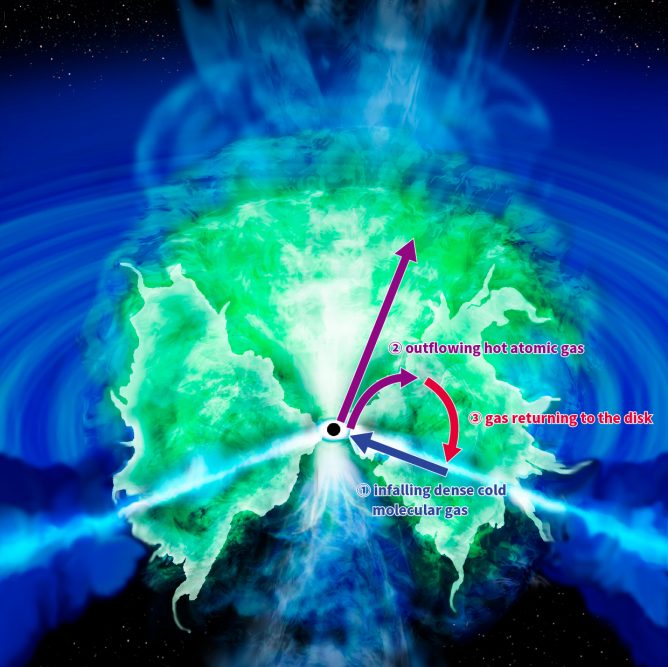 “Previous theoretical models set a priori assumptions of rigid donuts,” explains Keiichi Wada, a theoretician at Kagoshima University in Japan, who lead the simulation study and is a member of the research team. “Rather than starting from assumptions, our simulation started from the physical equations and showed for the first time that the gas circulation naturally forms a donut. Our simulation can also explain various observational features of the system.”

Cross section of the gas around a supermassive black hole simulated with NAOJ’s supercomputer ATERUI. The different colors represent the density of the gas, and the arrows show the motion of the gas. It clearly shows the three gaseous components forming the “donut” structure. 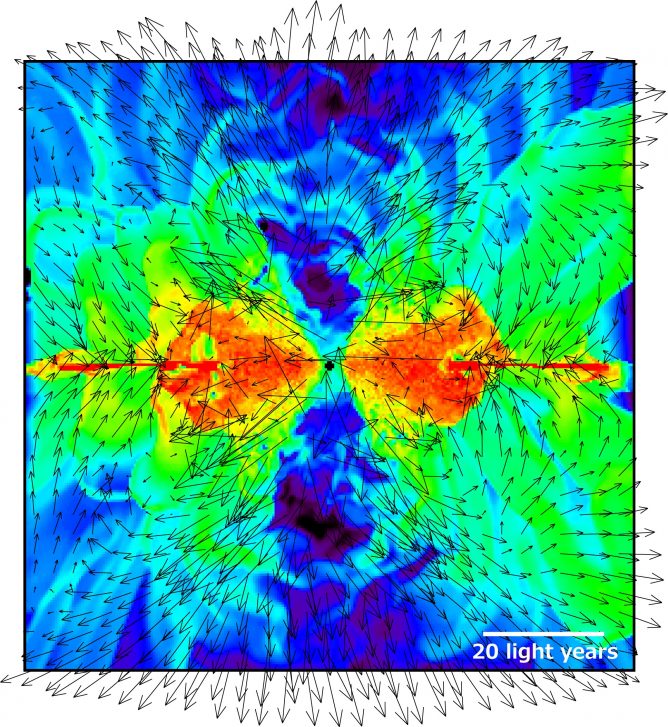 “By investigating the motion and distribution of both the cold molecular gas and warm atomic gas with ALMA, we demonstrated the origin of the so-called ‘donut’ structure around active black holes,” said Izumi. “Based on this discovery, we need to rewrite the astronomy textbooks.”

Paper and the research team
These observation results were published as T. Izumi et al. “Circumnuclear Multiphase Gas in the Circinus Galaxy. II. The Molecular and Atomic Obscuring Structures Revealed with ALMA” in the Astrophysical Journal in October 2018.