US Desert Areas to Become Even Drier


Beneath the Amargosa desert of the southwest United States lies a hidden gem for climate research. The Devils Hole cave system, named after its bottomless depths, provides a window into the vast desert aquifer below. The cave system is home to a peculiar type of calcite deposit. As groundwater slowly passes through the cave, calcite precipitates layer by layer on the rock walls. "These thin layers have been accumulating on the walls for nearly one million years," explains Kathleen Wendt from the Quaternary Research Group in the Department of Geology at the University of Innsbruck

Kathleen Wendt rappels down to the narrow lower chamber in Devils Hole 2 cave, part of the Devils Hole system. There is not a lot of room for movement, which makes working in the cave a special challenge. "The height of ancient deposits in Devils Hole cave tell us how high the water table was in the past."
Together with her colleagues, the geologist has conducted research in the cave for several years (see report: https://www.uibk.ac.at/newsroom/dossiers/devilshole/). In the current study, the Innsbruck team used special drilling equipment to collect calcite deposits from several points above and below the current water table. The ages of the deposits were then determined using the thorium-uranium method. The results have now been published in the prestigious journal "Science Advances". "This study reveals how the height of the water table has changed over the last 350,000 years. We were surprised to discover repeated swings as high as ten meters above today’s levels," explains Wendt.

Rises and falls in the local water table provide important clues to how rainfall patterns in the southwest United States have changed. Most of the rainfall that recharges the desert aquifer comes from winter storms that move east along the Pacific storm track. The position and intensity of these winter storms depend on many factors, including surface ocean temperatures and the strength of pressure systems in the eastern Pacific.

The scientists from Innsbruck used a special drill to extract cores of calcite deposits above and below the groundwater table. Here, geologist Yuri Dublyansky extracts a core from underwater. 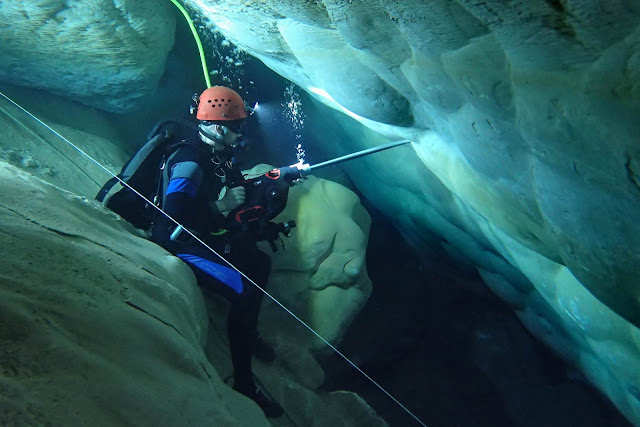 Whenever these factors changed dramatically in the past, such as during an ice age, the position of the Pacific storm track shifted in latitude. "Shifts in the Pacific storm track influenced the amount of rainfall reaching the southwest United States, resulting in pronounced changes in the Devils Hole water table height,” says Kathleen Wendt. "The past has shown us that this ‘water supplier’ is incredibly sensitive to global climate changes."

Lessons from the Amargosa desert’s distant past point to an even drier future. The already hot and dry southwest United States region is particularly sensitive to increasing global temperatures. "Climate models predict that this region will experience even higher temperatures and less precipitation in the next century," says Kathleen Wendt. The predicted drying trend is largely due to a gradual northward shift of the Pacific storm track, which will further reduce the amount of rainfall reaching the southwest in the future.

"Understanding the natural variability of the Pacific storm track over long periods of time is an important part of understanding how it will behave in the future," explains the geologist. “This data helps improve our long-term prognoses of future climate developments, which are expected to be even more rapid and extreme due to human influences."

Contacts and sources:
University of Innsbruck