An international team of astronomers has discovered a titanic structure in the early Universe, just two billion years after the Big Bang. This galaxy proto-supercluster, nicknamed Hyperion, is the largest and most massive structure yet found at such a remote time and distance.

The team that made the discovery was led by Olga Cucciati of Istituto Nazionale di Astrofisica (INAF) Bologna, Italy and project scientist Brian Lemaux in the Department of Physics, College of Letters and Science at the University of California, Davis, and included Lori Lubin, professor of physics at UC Davis. They used the VIMOSinstrument on ESO's Very Large Telescope in Paranal, Chile to identify a gigantic proto-supercluster of galaxies forming in the early Universe, just 2.3 billion years after the Big Bang.

Hyperion is the largest and most massive structure to be found so early in the formation of the Universe, with a calculated mass more than one million billion times that of the Sun. This enormous mass is similar to that of the largest structures observed in the Universe today, but finding such a massive object in the early Universe surprised astronomers.

An international team of astronomers has discovered a titanic structure in the early Universe, just two billion years after the Big Bang. This galaxy proto-supercluster, nicknamed Hyperion, is the largest and most massive structure yet found at such a remote time and distance. It has a mass estimated at a million billion Suns. 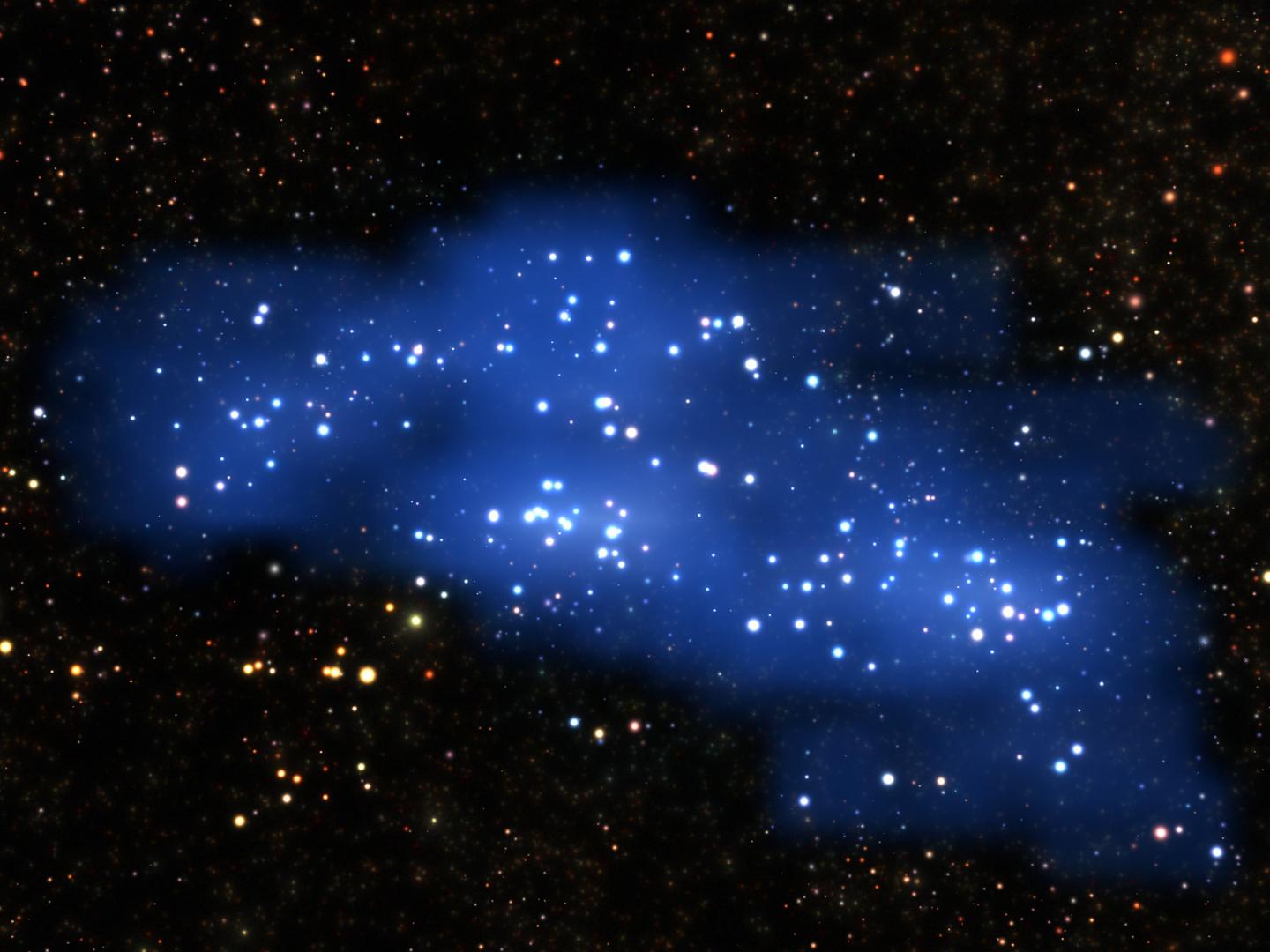 
"This is the first time that such a large structure has been identified at such a high redshift, just over 2 billion years after the Big Bang," Cucciati said. "Normally these kinds of structures are known at lower redshifts, which means when the Universe has had much more time to evolve and construct such huge things. It was a surprise to see something this evolved when the Universe was relatively young."

Located in the constellation of Sextans (The Sextant), Hyperion was identified by a novel technique developed at UC Davis to analyze the vast amount of data obtained from the VIMOS Ultra-Deep Survey led by Olivier Le Fèvre from Laboratoire d'Astrophysique de Marseille, Centre National de la Recherche Scientifique and Centre National d'Etudes Spatiales. The VIMOS instrument can measure the distance to hundreds of galaxies at the same time, making it possible to map the position of galaxies within the forming supercluster in three dimensions.

The team found that Hyperion has a very complex structure, containing at least seven high-density regions connected by filaments of galaxies, and its size is comparable to superclusters closer to Earth, though it has a very different structure.

"Superclusters closer to Earth tend to a much more concentrated distribution of mass with clear structural features," Lemaux said. "But in Hyperion, the mass is distributed much more uniformly in a series of connected blobs, populated by loose associations of galaxies."

The researchers are comparing the Hyperion findings with results from the Observations of Redshift Evolution in Large Scale Environments (ORELSE) survey, led by Lubin. The ORELSE survey uses telescopes at the W.M. Keck Observatory in Hawaii to study superclusters closer to Earth. Lubin and Lemaux are also using the Keck observatory to map out Hyperion and similar structures more completely.

The contrast between Hyperion and less distant superclusters is most likely due to the fact that nearby superclusters have had billions of years for gravity to gather matter together into denser regions -- a process that has been acting for far less time in the much younger Hyperion.

Given its size so early in the history of the Universe, Hyperion is expected to evolve into something similar to the immense structures in the local Universe such as the superclusters making up the Sloan Great Wall or the Virgo Supercluster that contains our own galaxy, the Milky Way.

"Understanding Hyperion and how it compares to similar recent structures can give insights into how the Universe developed in the past and will evolve into the future, and allows us the opportunity to challenge some models of supercluster formation," Cucciati said. "Unearthing this cosmic titan helps uncover the history of these large-scale structures."

This research will be published in an upcoming issue of the journal Astronomy & Astrophysics.