The word "HAZMAT" describes substances that pose a risk to the environment, or even to life itself. Imagine the term being applied to entire planets, where violent flares from the host star may make worlds uninhabitable by affecting their atmospheres.

"M dwarf" is the astronomical term for a red dwarf star -- the smallest, most abundant and longest-lived type of star in our galaxy. The HAZMAT program is an ultraviolet survey of red dwarfs at three different ages: young, intermediate, and old.

Violent outbursts of seething gas from young red dwarf stars may make conditions uninhabitable on fledgling planets. In this artist's rendering, an active, young red dwarf (right) is stripping the atmosphere from an orbiting planet (left). Scientists found that flares from the youngest red dwarfs they surveyed — approximately 40 million years old — are 100 to 1,000 times more energetic than when the stars are older. They also detected one of the most intense stellar flares ever observed in ultraviolet light — more energetic than the most powerful flare ever recorded from our Sun. 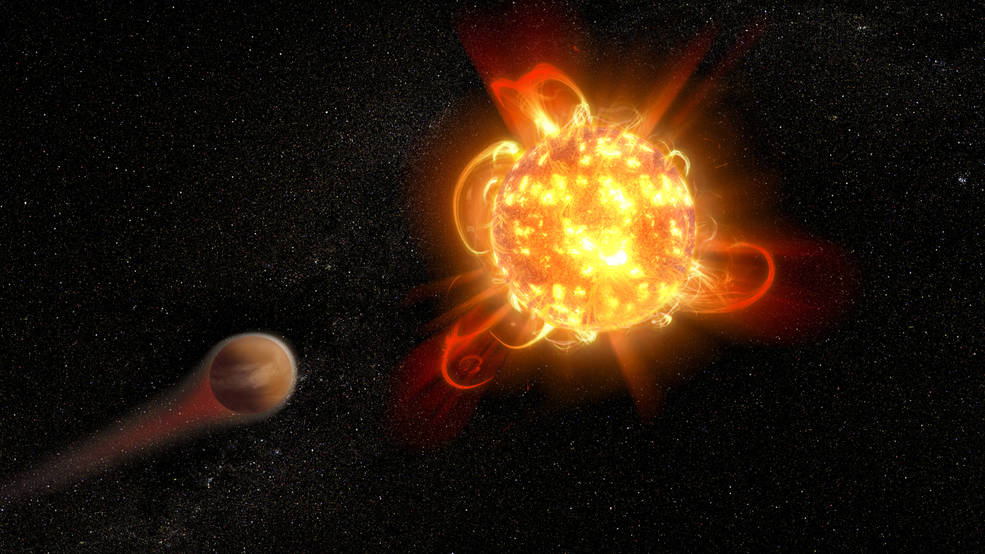 Stellar flares from red dwarfs are particularly bright in ultraviolet wavelengths, compared with Sun-like stars. Hubble's ultraviolet sensitivity makes the telescope very valuable for observing these flares. The flares are believed to be powered by intense magnetic fields that get tangled by the roiling motions of the stellar atmosphere. When the tangling gets too intense, the fields break and reconnect, unleashing tremendous amounts of energy.

The team has found that the flares from the youngest red dwarfs they surveyed -- just about 40 million years old -- are 100 to 1,000 times more energetic than when the stars are older. This younger age is when terrestrial planets are forming around their stars.

Approximately three-quarters of the stars in our galaxy are red dwarfs. Most of the galaxy's "habitable-zone" planets -- planets orbiting their stars at a distance where temperatures are moderate enough for liquid water to exist on their surface -- likely orbit red dwarfs. In fact, the nearest star to our Sun, a red dwarf named Proxima Centauri, has an Earth-size planet in its habitable zone.

However, young red dwarfs are active stars, producing ultraviolet flares that blast out so much energy that they could influence atmospheric chemistry and possibly strip off the atmospheres of these fledgling planets.

"The goal of the HAZMAT program is to help understand the habitability of planets around low-mass stars," explained Arizona State University's Evgenya Shkolnik, the program's principal investigator. "These low-mass stars are critically important in understanding planetary atmospheres."

The results of the first part of this Hubble program are being published in The Astrophysical Journal. This study examines the flare frequency of 12 young red dwarfs. "Getting these data on the young stars has been especially important, because the difference in their flare activity is quite large as compared to older stars," said Arizona State University's Parke Loyd, the first author on this paper.

The observing program detected one of the most intense stellar flares ever observed in ultraviolet light. Dubbed the "Hazflare," this event was more energetic than the most powerful flare from our Sun ever recorded.

"With the Sun, we have a hundred years of good observations," Loyd said. "And in that time, we've seen one, maybe two, flares that have an energy approaching that of the Hazflare. In a little less than a day's worth of Hubble observations of these young stars, we caught the Hazflare, which means that we're looking at superflares happening every day or even a few times a day."

Could super-flares of such frequency and intensity bathe young planets in so much ultraviolet radiation that they forever doom chances of habitability? According to Loyd, "Flares like we observed have the capacity to strip away the atmosphere from a planet. But that doesn't necessarily mean doom and gloom for life on the planet. It just might be different life than we imagine. Or there might be other processes that could replenish the atmosphere of the planet. It's certainly a harsh environment, but I would hesitate to say that it is a sterile environment."

The next part of the HAZMAT study will be to study intermediate-aged red dwarfs that are 650 million years old. Then the oldest red dwarfs will be analyzed and compared with the young and intermediate stars to understand the evolution of the ultraviolet radiation environment of low-mass planets around these low-mass stars.


The Hubble Space Telescope is a project of international cooperation between NASA and ESA (European Space Agency). NASA's Goddard Space Flight Center in Greenbelt, Maryland, manages the telescope. The Space Telescope Science Institute (STScI) in Baltimore, Maryland, conducts Hubble science operations. STScI is operated for NASA by the Association of Universities for Research in Astronomy, in Washington, D.C.