Researchers developed a mathematical model describing motion of dark matter particles inside the smallest galaxy halos. They observed that over time, the dark matter may form spherical droplets of quantum condensate. Previously this was considered impossible, as fluctuations of the gravity field produced by dark matter particles were ignored. The study is published in Physical Review Letters.

Dark matter is a hypothetical form of matter that does not emit electromagnetic radiation. This property hinders dark matter searches and makes it hard even to prove its existence. The speed of dark matter particles is low, which is why they are retained by galaxies. They interact with each other and with the ordinary matter so weakly that only their gravity field can be sensed, otherwise the dark matter does not manifest itself in any way. Each galaxy is surrounded by a dark matter shell (halo) of much larger size and mass.

Left image: initial moment, when the gas is mixed; right image: the moment shortly after the formation of a Bose star. The colour indicates density: white-blue-green-yellow, from sparse to dense. 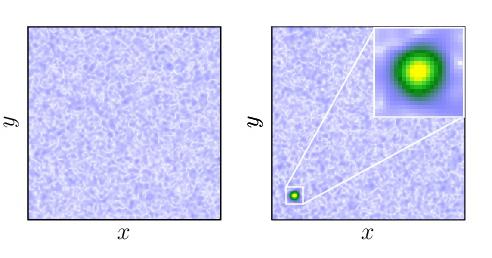 Most cosmologists believe that dark matter particles have large mass, hence their speed is high. Yet, back in the 1980s it was realized that under special conditions these particles may be produced in the early Universe with almost zero speed, regardless of their mass. They might also be very light. As a consequence, the distances at which the quantum nature of these particles becomes apparent can be huge. Instead of the nanometer scales that are usually required to observe quantum phenomena in laboratories, the "quantum" scale for such particles may be comparable to the size of the central part of our galaxy.

The researchers observed that the dark matter particles, if they are bosons with sufficiently small mass, may form a Bose-Einstein condensate in the small galaxy halos or in even smaller substructures due to their gravitational interactions. Such substructures include halos of dwarf galaxies - systems of several billion stars bound together by gravitational forces, and miniclusters - very small systems formed only by dark matter. The Bose-Einstein condensate is a state of quantum particles in which they all occupy the lowest energy level, having the smallest energy. The Bose-Einstein condensate can be produced in the lab at low temperatures from ordinary atoms. This state of matter exhibits unique properties, such as superfluidity: the ability to pass through tiny cracks or capillaries without friction. Light dark matter in the galaxy has low speed and huge concentration. Under these conditions, it should eventually form a Bose-Einstein condensate. But in order for this to happen, dark matter particles must interact with each other, while as far as we know, they interact only gravitationally.

"In our work, we simulated motion of a quantum gas of light gravitationally interacting dark matter particles. We started from a virialized state with maximal mixing, which is kind of opposite to the Bose-Einstein condensate. After a very long period, 100,000 times longer than the time needed for a particle to cross the simulation volume, the particles spontaneously formed a condensate, which immediately shaped itself into a spherical droplet, a Bose star, under the effect of gravity," said one of the authors, Dmitry Levkov, Ph.D. in Physics, Senior Researcher at the Institute for Nuclear Research of the Russian Academy of Sciences.

Dr. Levkov and his colleagues, Alexander Panin and Igor Tkachov from the Institute for Nuclear Physics of the Russian Academy of Sciences, concluded that Bose-Einstein condensate may form in the centres of halos of dwarf galaxies in a time smaller than the lifetime of the Universe. This means that Bose stars could populate them now.

The authors were the first who saw the formation of the Bose-Einstein condensate from light dark matter in computer simulations. In previous numerical studies, the condensate was already present in the initial state, and Bose stars arose from it. According to one hypothesis, the Bose condensate could have formed in the early Universe long before the formation of galaxies or miniclusters, but reliable evidence for that is currently lacking. The authors demonstrated that the condensate is formed in the centres of small halos, and they plan to investigate condensation in the early Universe in further studies.

The scientists pointed out that the Bose stars may produce Fast Radio Bursts that currently have no quantitative explanation. Light dark matter particles called "axions" interact with electromagnetic field very weakly and can decay into radiophotons. This effect is vanishingly small, but inside the Bose star it may be resonantly amplified like in a laser and could lead to giant radio bursts.

"The next obvious step is to predict the number of the Bose stars in the Universe and calculate their mass in models with light dark matter," concluded Dmitry Levkov.

This work was supported by the Russian Science Foundation (RSF).