Not All Planetary Systems Are into Heavy Metal

Small planetary systems with multiple planets are not fans of heavy metal — think iron, not Iron Maiden — according to a new Yale University study.

Researchers at Yale and the Flatiron Institute have discovered that compact, multiple-planet systems are more likely to form around stars that have lower amounts of heavy elements than our own Sun. This runs counter to a good deal of current research, which has focused on stars with higher metallicity.

The research team looked at 700 stars and their surrounding planets for the study, which appears in The Astrophysical Journal Letters. The researchers considered any element heavier than helium — including iron, silicon, magnesium, and carbon — as a heavy metal.

“We used iron as a proxy,” said lead author John Michael Brewer, a postdoctoral researcher at Yale who works with astronomy professor Debra Fischer. “These are all elements that make up the rocks in small, rocky planets.” 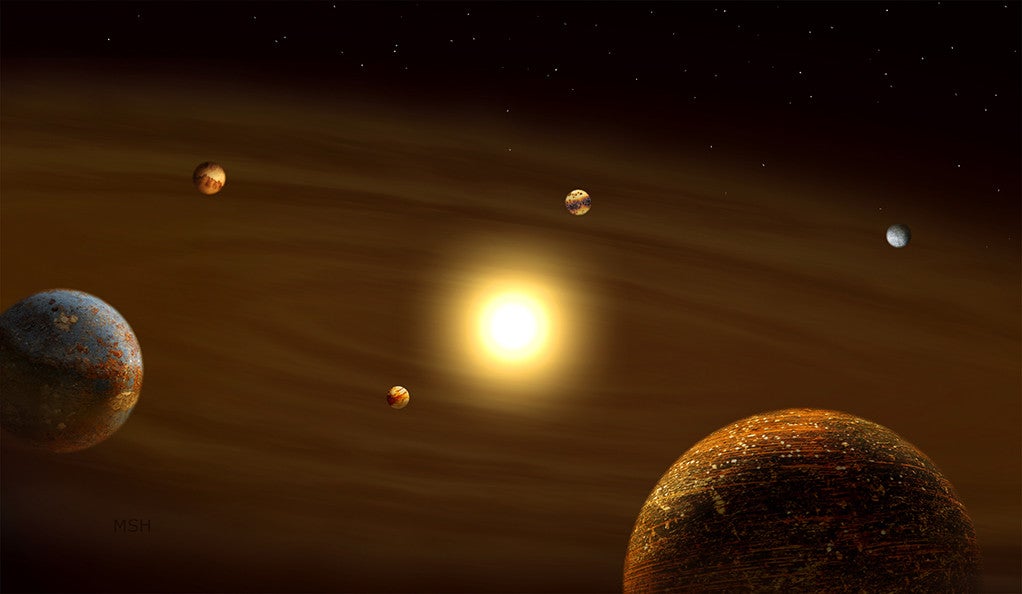 First, he said, it may indicate that there are many more of these systems than previously assumed. Until recently, research instruments have not had the necessary precision to detect smaller planets and instead focused on detecting larger planets. Now, with the advent of technology such as the Extreme Precision Spectrometer (EXPRES) developed by Fischer’s team at Yale, researchers will be able to find smaller planets.

In addition, Brewer said, the new study suggests that small planetary systems may be the earliest type of planetary system, making them an ideal place to search for life on other planets. “Low-metallicity stars have been around a lot longer,” Brewer said. “That’s where we’ll find the first planets that formed.”

Fischer, who is a co-author of the study, demonstrated in 2005 that higher metallicity in stars increased the probability of forming large, Jupiter-like planets. This provided strong support to the core-accretion model for gas giant planet formation and established this as the leading mechanism for planet formation.

Understanding the formation of smaller planets has been more elusive.

“Our surprising result, that compact systems of multiple, small planets are more likely around lower metallicity stars suggests a new, important clue in understanding the most common type of planetary system in our galaxy,” said co-author Songhu Wang, a 51 Pegasi b Fellow at Yale.

Another tantalizing possibility to explore, according to the researchers, is the connection between iron and silicon in the birth of planets. The new study shows a high silicon-to-iron ratio in stars with lower metallicity.

“Silicon could be the secret ingredient,” Fischer said. “The ratio of silicon to iron is acting as a thermostat for planet formation. As the ratio increases, nature is dialing up the formation of small, rocky planets.”

The National Science Foundation helped support the research. Wang’s fellowship is supported by the Heising-Simons Foundation.