Sixty-six million years ago, an asteroid the size of a small city smashed into the earth. This impact, the one that would lead to the end of the dinosaurs, left a scar several miles underground and more than 115 miles wide.

This painting by Donald E. Davis depicts an asteroid slamming into tropical, shallow seas of the sulfur-rich Yucatan Peninsula in what is today southeast Mexico. The aftermath of this immense asteroid collision, which occurred approximately 65 million years ago, is believed to have caused the extinction of the dinosaurs and many other species on Earth. The impact spewed hundreds of billions of tons of sulfur into the atmosphere, producing a worldwide blackout and freezing temperatures which persisted for at least a decade. Shown in this painting are pterodactyls, flying reptiles with wingspans of up to 50 feet, gliding above low tropical clouds. 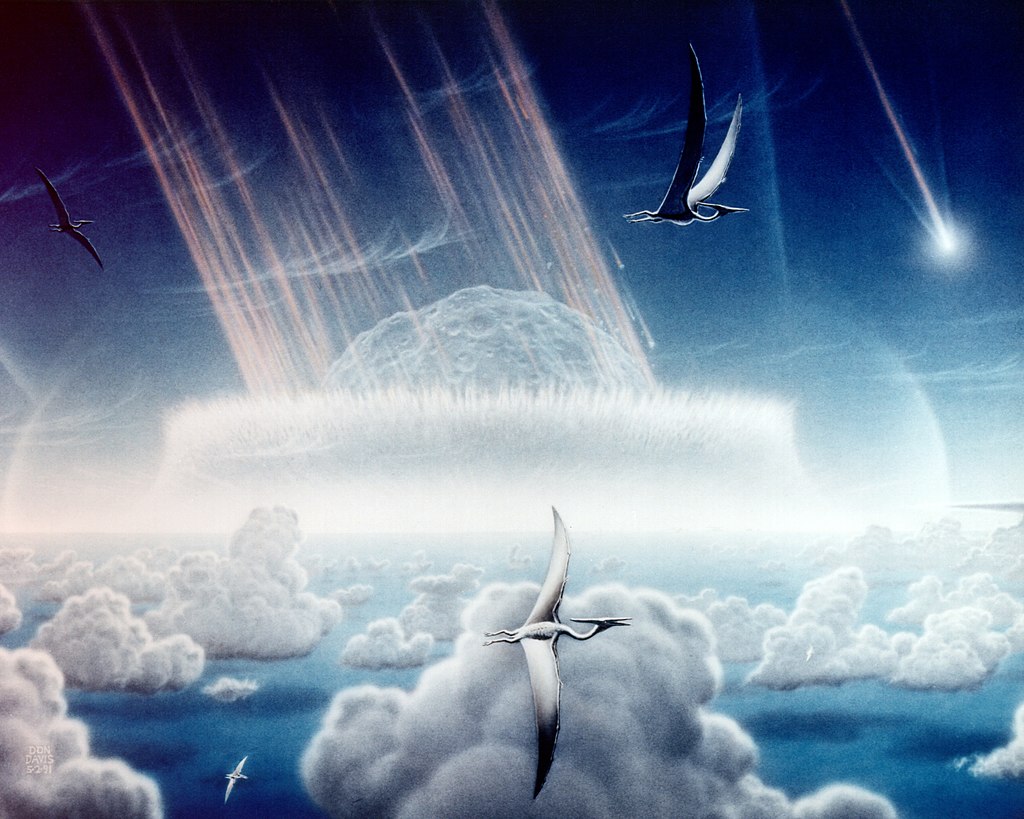 Chicxulub, which lies underneath the Yucatán Peninsula of Mexico, is the best-preserved large impact crater on Earth, although it's buried underneath a half mile of rocks. It's also the only crater on the planet with a mountainous ring of smashed rocks inside its outer rim, called a peak ring. How these features form has long been debated, but a new study in Nature shows they're a product of extremely strong vibrations in the Earth that let rock flow like liquid for a crucial few minutes after the impact.

When an asteroid crashes into the earth, it leaves a bowl-shaped pit, just like you'd expect. But it doesn't just leave a dent. If the asteroid is big enough, the resulting crater can be more than 20 miles deep, at which point it becomes unstable and collapses.


"For a while, the broken rock behaves as a fluid," said Jay Melosh, a professor of earth, atmospheric and planetary sciences at Purdue University. "There have been a lot of theories proposed about what mechanism allows this fluidization to happen, and now we know it's really strong vibrations shaking the rock constantly enough to allow it to flow."

This mechanism, known as "acoustic fluidization," is the process that allows the ring of mountains in the crater's center to rise within minutes of the asteroid's strike. (This idea was first proposed by Melosh in 1979). Craters are essentially the same on all the terrestrial planets (Earth, Mercury, Venus, Mars and our moon), but they're hard to study in space for obvious reasons: We can't look at them with the same detail we can on Earth.

The Chicxulub crater isn't easily accessible by traditional standards either; it's been buried throughout the last 66 million years. So the International Ocean Discovery Program (a group within the International Continental Scientific Drilling Program), did the only thing they could - they dug. The team drilled a core roughly six inches in diameter and a mile into the Earth, collecting rock that was shattered and partly melted by the impact that wiped out the dinosaurs.

In examining fracture zones and patterns in the core, the international research team found an evolution in the vibration sequence that would allow debris to flow.

"These findings help us understand how impact craters collapse and how large masses of rock behave in a fluid-like manner in other circumstances, such as landslides and earthquakes," Melosh said. "Towns have been wiped out by enormous landslides, where people thought they were safe but then discovered that rock will flow like liquid when some disturbance sets a big enough mass in motion."

Horizontal gradient map of the Bouguer gravity anomaly over the Chicxulub crater (North is up.). The coastline is shown as a white line. A striking series of concentric features reveals the location of the crater.

The extinction of the dinosaurs itself was probably not directly affected by the crater's internal collapse - other, external effects of the impact did them in, Melosh said. Regardless, it's important to understand the consequences of a large asteroid strike on Earth. Because cratering is the same on all the terrestrial planets, these findings also validate the mechanics of impacts everywhere in the solar system.