The Laser Interferometer Space Antenna (LISA) will enable astrophysicists to observe gravitational waves emitted by black holes as they collide with or capture other black holes. LISA will consist of three spacecraft orbiting the sun in a constant triangle formation. Gravitational waves passing through will distort the sides of the triangle slightly, and these minimal distortions can be detected by laser beams connecting the spacecraft. LISA could therefore add a new sense to scientists' perception of the universe and enable them to study phenomena invisible in different light spectra.

Scientists from the Center for Theoretical Astrophysics and Cosmology of the University of Zurich, together with colleagues from Greece and Canada, have now found that LISA will not only be able to measure these previously unstudied waves, but could also help to unveil secrets about another mysterious part of the universe: dark matter.

Snapshots of the 120 million particle simulation of two merging dwarf galaxies, which each contain a blackhole, between 6 and 7.5 billion years 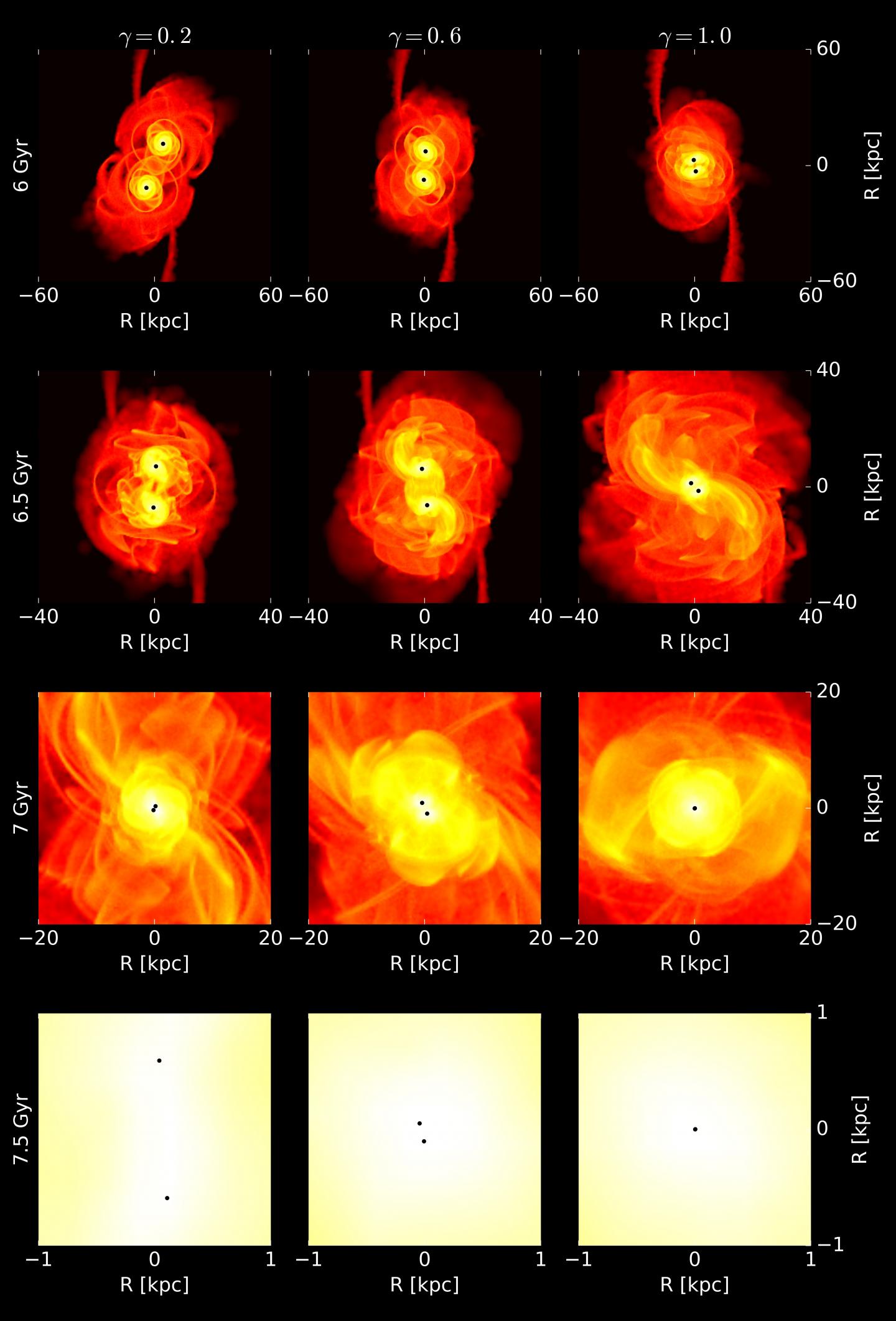 Dark matter particles are thought to account for approx. 85% of the matter in the universe. However, they are still only hypothetical - the name refers to their "hiding" from all previous attempts to see, let alone study them. But calculations show that many galaxies would be torn apart instead of rotating if they weren't held together by a large amount of dark matter.

That is especially true for dwarf galaxies. While such galaxies are small and faint, they are also the most abundant in the universe. What makes them particularly interesting for astrophysicists is that their structures are dominated by dark matter, making them "natural laboratories" for studying this elusive form of matter.

As reported in Astrophysical Journal Letters, high-resolution computer simulations of the birth of dwarf galaxies, designed and carried out by UZH PhD student Tomas Ramfal, yielded surprising results. Calculating the interplay of dark matter, stars and the central black holes of these galaxies, the team of scientists from Zurich discovered a strong link between the merger rates of these black holes and the amount of dark matter at the center of dwarf galaxies. Measuring gravitational waves emitted by merging black holes can thus provide hints about the properties of the hypothetical dark matter particle.

The newly found connection between black holes and dark matter can now be described in a mathematical and exact way for the first time. But it is far from being a chance finding, stresses Lucio Mayer, the group leader: "Dark matter is the distinguishing quality of dwarf galaxies. We had therefore long suspected that this should also have a clear effect on cosmological properties."

The connection comes at an opportune moment, just as preparations for the final design of LISA are under way. Preliminary results of the researchers' simulations were met with excitement at meetings of the LISA consortium. The physics community sees the new use of gravitational wave observations as a very promising new prospect for one the biggest future European space missions, which will take place in about 15 years and could link cosmology and particle physics - the incredibly big and the unimaginably small.