The first vertebrates on Earth were fish, and scientists believe they first appeared around 480 million years ago. But fossil records from this time are spotty, with only small fragments identified. By 420 million years ago, however, the fossil record blossoms, with a huge variety of fish species present en masse.

In a report in Science, a team led by paleobiologist Lauren Sallan of the School of Arts and Sciences finds that ancient fish species diversified in near-shore ocean areas, not coral reefs.

Bothriolepis, an armored, bottom-dwelling placoderm related to some of the earliest jawed vertebrates to appear in the record, lived mostly at the coasts. Research by Lauren Sallan and colleagues found that such groups diversified in shallow ocean waters before spreading out to other habitat types. 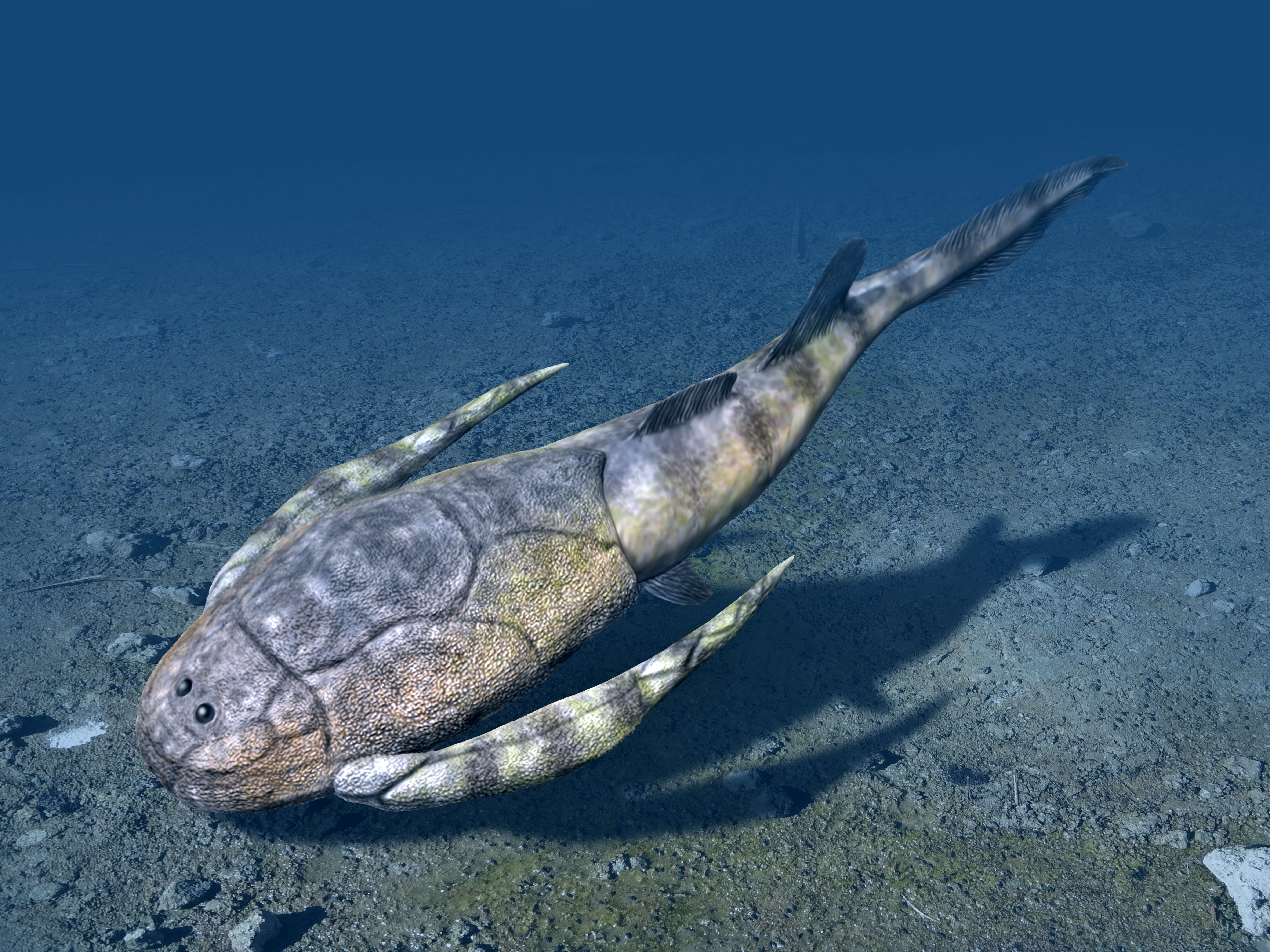 “It’s been this ongoing question of, well, where were they?” says Lauren Sallan, a paleobiologist at the University of Pennsylvania. “Where were they hiding? What were their environmental origins?”

Sallan, Ivan Sansom of the University of Birmingham, and colleagues are the first to present a wealth of evidence to answer that question in a report out this week in the journal Science.

Phlebolepis, a streamlined jawless fish with tiny scales that lived 425 million years ago, swims in deeper subtidal waters near a reef. 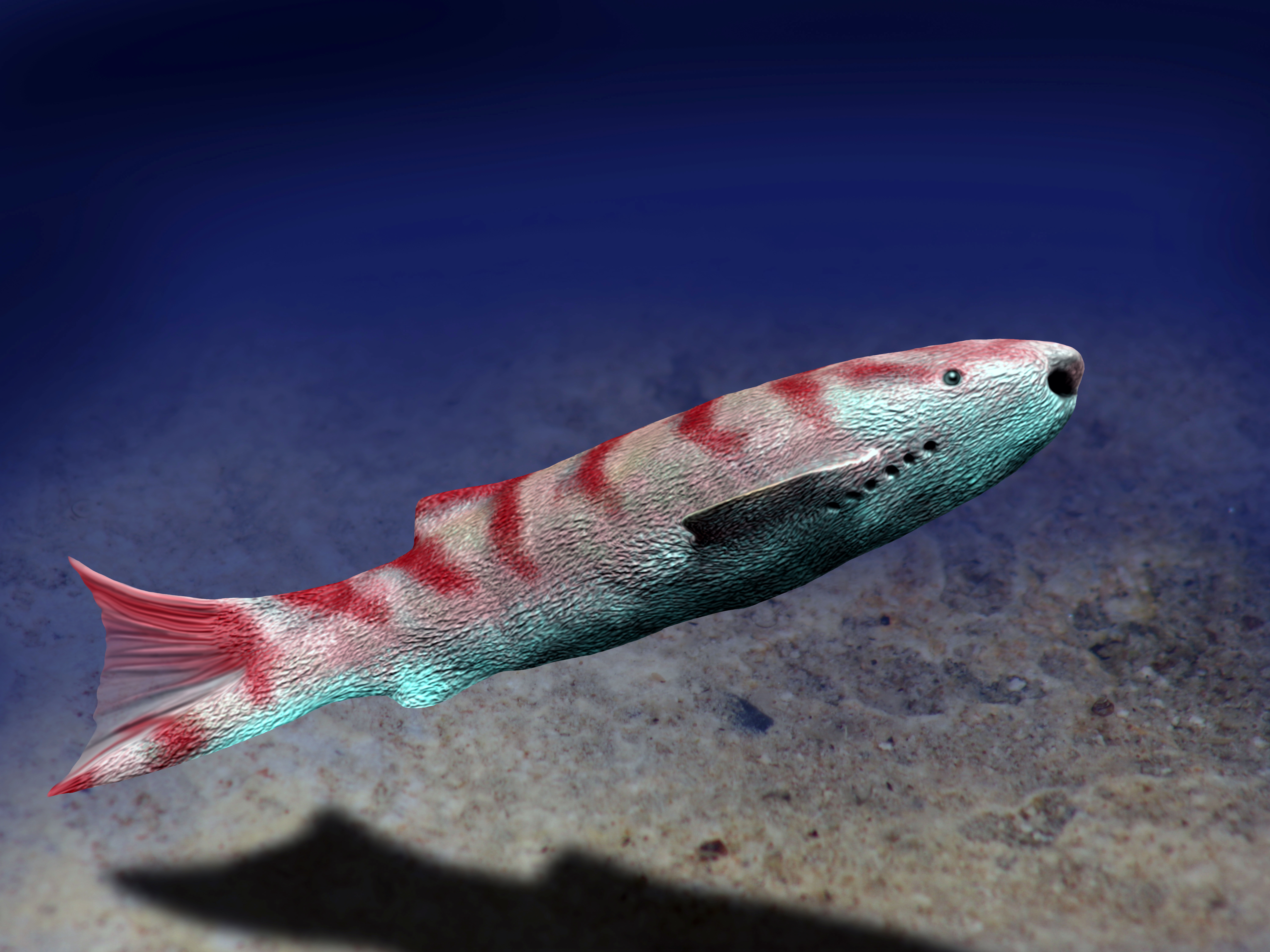 And the answer, it seems, is near shore, the areas often described as the intertidal zone, or shallow lagoons.

“In modern conceptions, we see that coral reefs are so important for fish biodiversity, so we assume there’s an ancient link between fishes and reefs going back to the beginning,” says Sallan. “But decades of searching in places like the Cincinnati Arch have come up empty.”

“Instead, our work shows that almost every major vertebrate division, from the earliest armored jawless fish all the way up through sharks and our own ancestors, all started out right near the beach, far inshore of the reef. Even as older groups spread out, newer groups were also appearing at the shoreline.”

The findings help explain important features of the fossil record, such as why so few early fish fossils are found intact; the wave action of the shallow ocean area likely blasted them into tiny fragments. It also helps scientists make sense of the fact that, over evolutionary time, many fish groups moved from ocean water to freshwater, some becoming freshwater fish, while others evolved into the earliest tetrapods, land-dwelling vertebrates.

Pituriaspis, a member of rare group of 410 million year old jawless fishes from Australia, meets a mate along the shoreline. 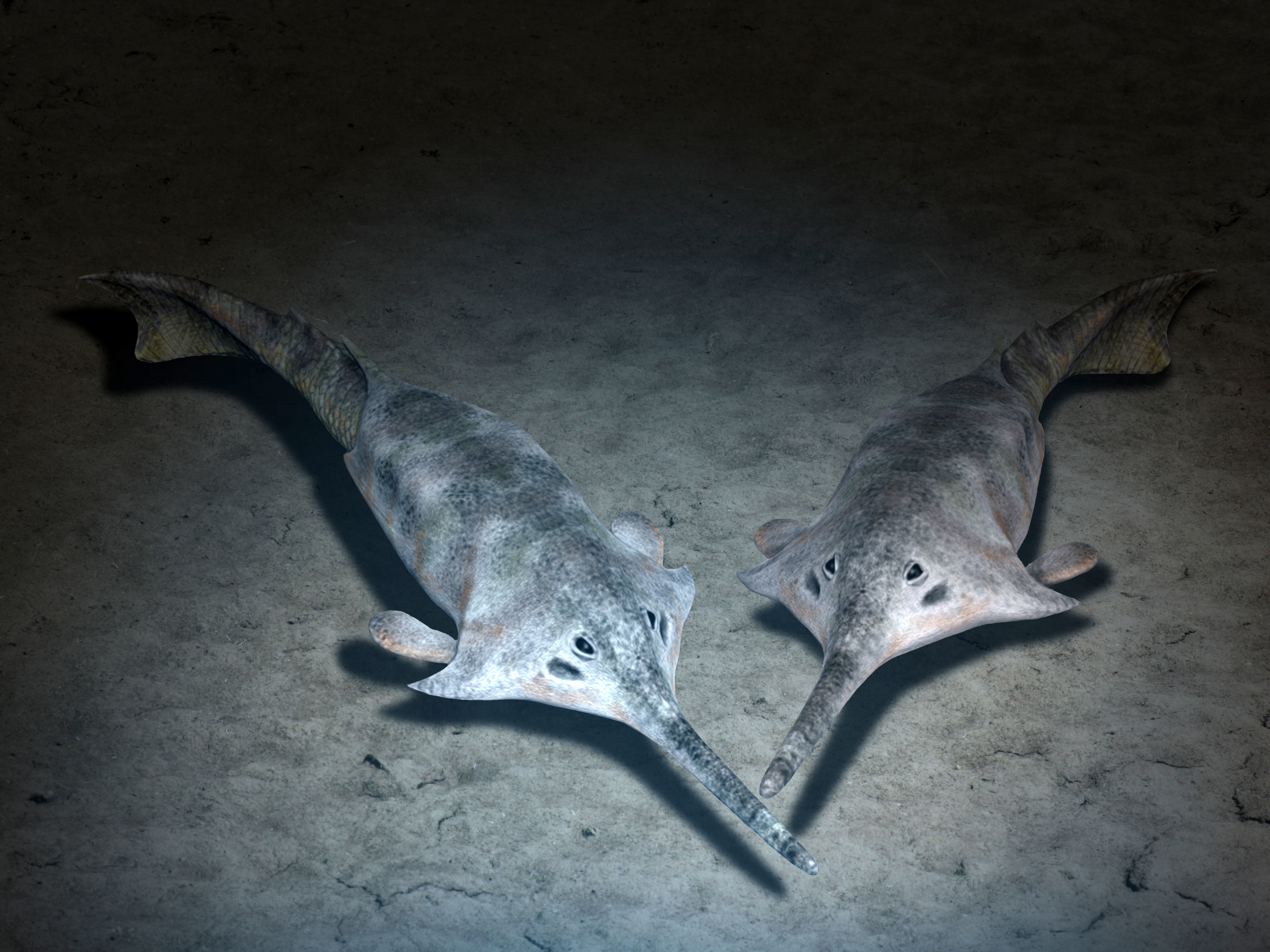 “They often went to freshwater before the reefs, which is almost an independent line of evidence that they would have had to have been close to shore before doing so,” Sallan says.

Exactly where vertebrates originated and diversified has been a hotly debated subject in paleontology. Certain groups of fossils from this key period in the middle Paleozoic Era told one story—perhaps a freshwater site of origin—while other groups may point to a birthplace in the open ocean, and still others popped up in other habitat types. Further complicating matters, the origin story of invertebrate biodiversity seems settled: They diversified around coral reefs, their descendants subsequently striking out to inhabit shallower or deeper waters.

Sallan, Sansom, and colleagues decided to investigate the question for vertebrates using a big-data approach.

“The nice thing about the fossil record is that we often find fishes in the context of where they live,” Sallan says. “The rock that holds them tells us what their environment looked like, whether it was reef, shallow water, deep water, a riverbed, or a lake.”

Bringing that environmental context together with what was already known about the family tree relationships of vertebrates from the middle Paleozoic, 480 to 360 million years ago, the researchers created a database that involved 2,728 early records for jawed and jawless fishes.

Cephalaspis, an armored, bottom-dwelling jawless osteostracan, a member of the first group to have paired appendages like our own arms, inhabited mostly freshwaters 415 million years ago. 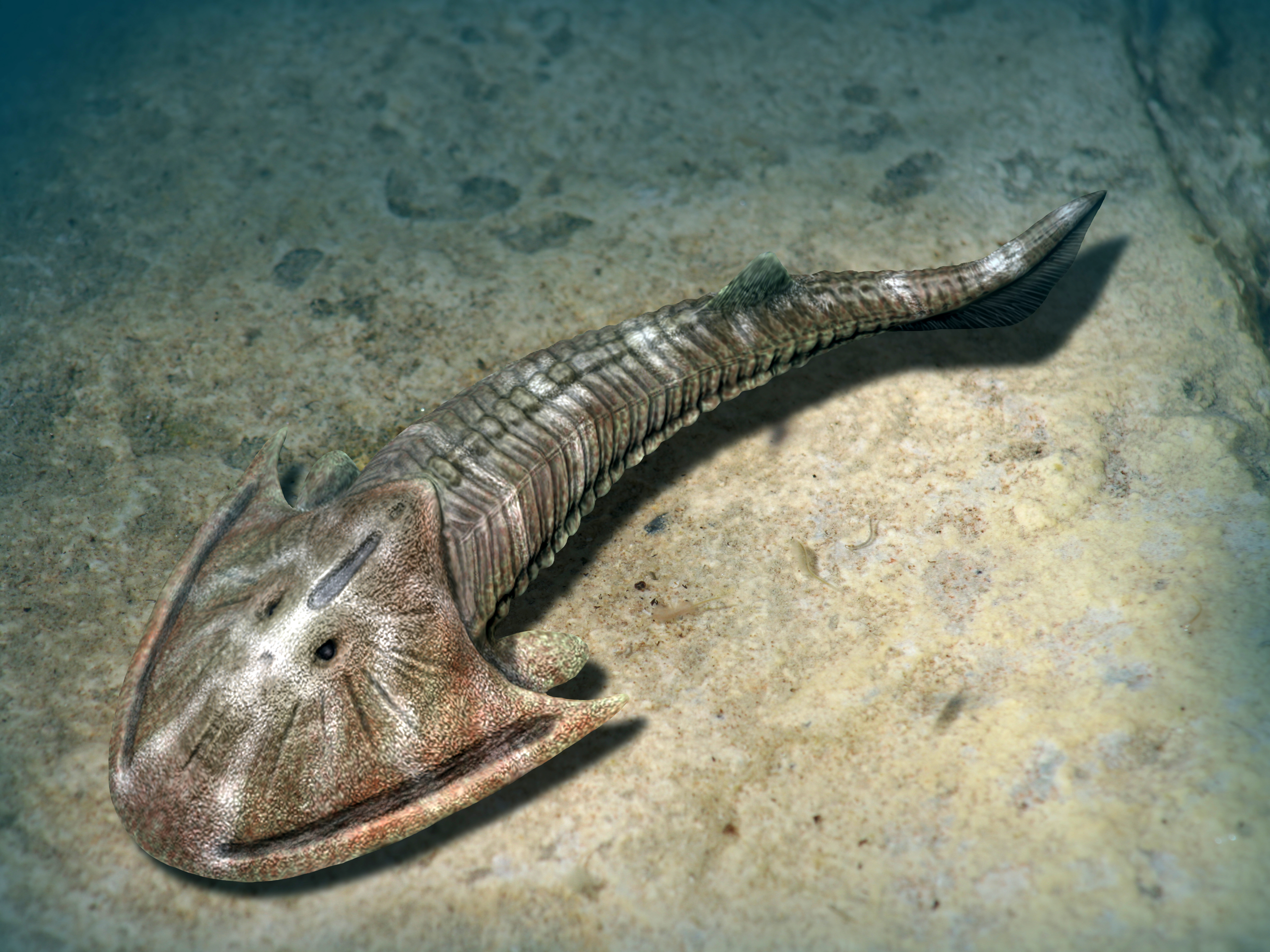 The team was then able to reconstruct the missing information in the fossil record using mathematical modeling, allowing them to make informed predictions about the habitat type in which the earliest ancestors of various vertebrate groups emerged.

“For vertebrates, we find that they’re originating in this unexpected, really restricted shallow area of the oceans,” Sallan says. “And they stay in this limited area for a long time after they emerge.”

“We don’t yet know exactly what was special about those early, shallow marine environments that enabled earliest fish to take those first evolutionary steps,” adds Sansom, “but we do think they provided evolutionary ‘hotspots’, responsible for generating this rich diversity.”

As they remained in the shallows, however, they gained a variety of adaptations that enabled them to compete with the others in a shared habitat. The researchers noted that many groups acquired traits that made them well-suited for life either as bottom-dwellers, or for a free-swimming ecology out in the ocean’s deeper waters.

A similar divergence has been seen in modern fish, such as sticklebacks, which evolved a bottom-dwelling and a free-swimming form from common ancestors in more recent times. 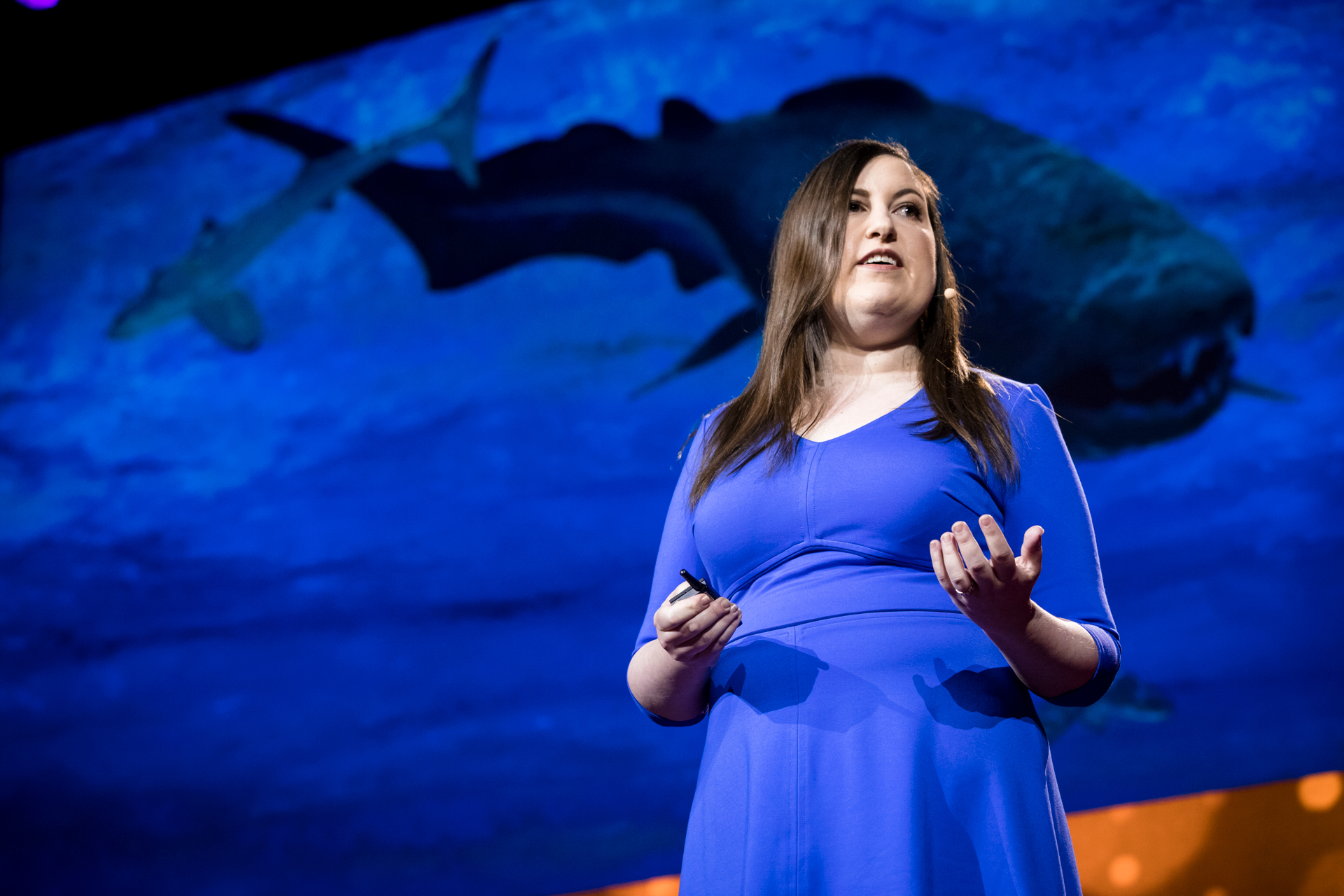 No one has done a similarly comprehensive study on living vertebrate species, however. “One of the things we want to know is whether these shallow waters are still the biological pump that is feeding the reef,” Sallan says. “Where is the current site of innovation?”

If that were the case, there may be some small consolation in the face of mass reef die-offs around the world; maybe shallow waters will continue to be the cradle of diversification for fish, allowing biodiversity to persist despite a paucity of reef habitat.

Lauren Sallan is the Martin Meyerson Assistant Professor in Interdisciplinary Studies in the University of Pennsylvania School of Arts and Sciences and is a TED Fellow.

Ivan J. Sansom is a senior lecturer in palaeobiology in the School of Geography at the University of Birmingham.