Evolution Repeats Itself After All: How Fish Stripes Come and Go

A team of evolutionary biologists from the University of Konstanz, headed by Prof. Dr. Axel Meyer, discovered the genetic basis for the repeated evolution of color patterns. The findings about the stripes of the especially diverse species of East-African cichlid fishes explain how evolution can repeat itself at record speed. The study is published in “Science” magazine on 26 October.

Why does evolution repeat itself? What happens genetically during these repetitions? Do the same or other genes and mechanisms produce organisms that look similar? Professor Axel Meyer and his team from Konstanz University have come closer to answering this question that is as old as it is important. The answer is quite astonishing. They studied a special color pattern that is omnipresent among all kinds of animals: horizontal stripes. The researchers were able to identify the basis of the repeated evolution of these stripes with modern methods in genomics and molecular biology and verified them with a CRISPR-Cas mutant fish that added a stripe. 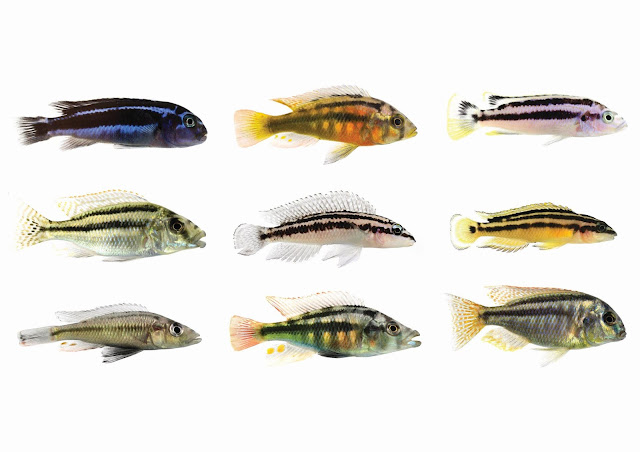 
More than 1200 types of colourful cichlid can be found in the large African lakes Malawi, Victoria and Tanganjika. Not only are they very diverse in colours, they also have numerous colour patterns such as horizontal or vertical stripes. “But that’s not all” explains Axel Meyer, “cichlids are prime examples of evolution. They are extremely diverse in terms of social behaviour, body shape, colour pattern and many other biological aspects, but at the same time certain features repeatedly evolved independently in the different lakes”. This principle of repeated evolution – biologists term it convergent evolution – makes cichlids the perfect target to study the genetic basis of this phenomenon. If similar colours and body shapes have emerged in several evolutionary lines independently from each other this means that evolution reacted to similar environmental conditions in the same way. The question now is: When evolution repeats itself, how does this work genetically?

Which gene and which genetic mechanism are responsible for the cichlids’ stripes to come and go has now been reconstructed in the laboratory through genome analyses, breeding and experiments, including CRISPR-Cas as “gene scissors”. Dr Claudius Kratochwil, early career researcher in Professor Meyers team and first author of the study in Science, explains: “In breeding experiments we can exactly determine on which of the 22 chromosomes, even on which area of the chromosome of the fish, the genetic instruction for stripes is located”. The relevant gene on this chromosome part is called agrp2. This “stripe gene”, its origin and distribution in other African lakes was described in comparative molecular studies.

From an evolutionary point of view, the cichlids’ stripes are rather unstable. Over the course of a few million years, they have been lost and re-emerged in the African lakes many times over. As these species (with and without stripes) are so young, they can be interbred in aquaria. Breeding and examining the cichlids with and without stripes in the laboratory shows that all cichlids carry the “stripes gene”, but the switches (regulatory elements) of this gene differ. “This genetic switch causes the gene in species without stripes to be more activated. As a result, a lot of protein is produced. The “stripes gene” agrp2 works as a “stripes inhibitor”: if gene production is high, stripes will be suppressed, if production is low, they will remain. The researchers were able to demonstrate this by using modern genetic methods. “If we use CRISPR-Cas to remove the gene from the genome of a species without stripes”, Kratochwil explains, “then even a “stripeless” fish will suddenly develop stripes, as we showed with a CRISPR-Cas mutant fish. This proves that the stripes gene is the decisive genetic factor”.

The latest findings on this genetic mechanism, the activation or deactivation of stripes by the “stripes gene”, were published in the current issue of “Science” magazine. Interestingly, the cichlid’s agrp2 gene is a copy of the agouti gene in mammals, which is responsible for the different coat colours of cats, dogs, horses and striped baby birds. “The world of animals might be much less colourful without the agouti gene family”, reflects Claudius Kratochwil. The mechanism of the “stripes gene” in cichlids clearly makes repeated evolution possible within the briefest of times, relatively speaking.

If characteristics are lost during evolution, usually this loss is forever, as the Belgian palaeontologist Louis Dollo already realized exactly 125 years ago, and wrote up his conclusions in “Dolls Law” in 1893. The special aspect of the stripes gene agrp2 is that it makes repeated evolution of a characteristic possible in a simple way. If a cichlid loses its stripes that does not mean they will never return or vice versa. These molecular-biological studies also show that palaeontological rules and evolutionary rules have to be questioned once again.


Contacts and sources:
University of Konstanz