A team of Hungarian astronomers and physicists may have confirmed two elusive clouds of dust, in semi-stable points just 400,000 kilometres from Earth.

The clouds, first reported by and named for Polish astronomer Kazimierz Kordylewski in 1961, are exceptionally faint, so their existence is controversial. The new work appears in the journal Monthly Notices of the Royal Astronomical Society.

The Earth-Moon system has five points of stability where gravitational forces maintain the relative position of objects located there. Two of these so-called Lagrange points, L4 and L5, form an equal-sided triangle with the Earth and Moon, and move around the Earth as the Moon moves along its orbit.

Artist’s impression of the Kordylewski cloud in the night sky (with its brightness greatly enhanced) at the time of the observations.

L4 and L5 are not completely stable, as they are disturbed by the gravitational pull of the Sun. Nonetheless they are thought to be locations where interplanetary dust might collect, at least temporarily. Kordylewski observed two nearby clusters of dust at L5 in 1961, with various reports since then, but their extreme faintness makes them difficult to detect and many scientists doubted their existence.

In a paper earlier this year the Hungarian team, led by Gábor Horváth of Eötvös Loránd University, modelled the Kordylewski clouds to assess how they form and how they might be detected. The researchers were interested in their appearance using polarising filters, which transmit light with a particular direction of oscillation, similar to those found on some types of sunglasses. Scattered or reflected light is always more or less polarised, depending on the angle of scattering or reflection.

They then set out to find the dust clouds. With a linearly polarising filter system attached to a camera lens and CCD detector at Slíz-Balogh’s private observatory in Hungary (Badacsonytördemic), the scientists took exposures of the purported location of the Kordylewski cloud at the L5 point.

Pattern of the angle of polarization of the sky around the L5 Lagrange point of the Earth-Moon system, measured by imaging polarimetry in the green (550 nm) spectral range at 01:14:15 UT on 19 August 2017. The position of the L5 point is shown by a white dot. In this picture the central region of the Kordylewski dust cloud is visible (bright red pixels). The straight tilted lines are traces of satellites. 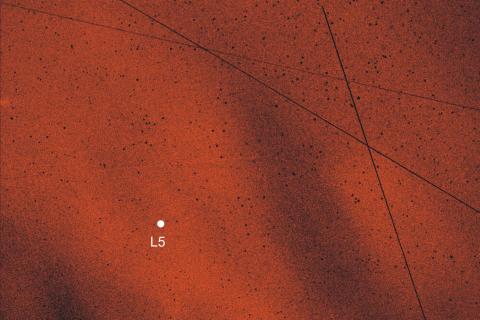 The images they obtained show polarised light reflected from dust, extending well outside the field of view of the camera lens. The observed pattern matches predictions made by the same group of researchers in an earlier paper and is consistent with the earliest observations of the Kordylewski clouds six decades ago. Horváth’s group were able to rule out optical artefacts and other effects, meaning that the presence of the dust cloud is confirmed.

Judit Slíz-Balogh comments on their discovery: “The Kordylewski clouds are two of the toughest objects to find, and though they are as close to Earth as the Moon are largely overlooked by researchers in astronomy. It is intriguing to confirm that our planet has dusty pseudo-satellites in orbit alongside our lunar neighbour.”

Mosaic pattern of the angle of polarization around the L5 point (white dot) of the Earth-Moon system. The five rectangular windows correspond to the fields of view of the imaging polarimetric telescope with which the polarization patterns of the Kordylewski dust cloud were measured. 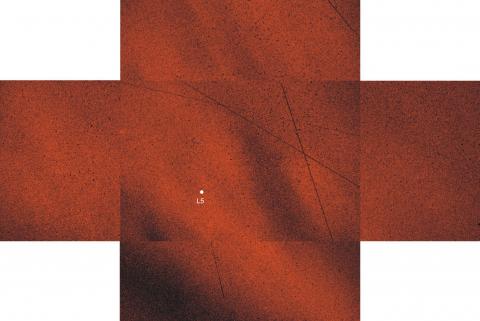 
Given their stability, the L4 and L5 points are seen as potential sites for orbiting space probes, and as transfer stations for missions exploring the wider Solar System. There are also proposals to store pollutants at the two points. Future research will look at L4 and L5, and the associated Kordylewski clouds, to understand how stable they really are, and whether their dust presents any kind of threat to equipment and future astronauts alike.