Asian elephants demonstrate numeric ability which is closer to that observed in humans rather than in other animals.

Experimental evidence showing that Asian elephants possess numerical skills similar to those in humans was developed by lead author Naoko Irie of SOKENDAI (The Graduate University for Advanced Studies) in Japan. In a study published in the Springer-branded Journal of Ethology, Irie and her colleagues found that an Asian elephants' sense of numbers is not affected by distance, magnitude or ratios of presented numerosities, and therefore provides initial experimental evidence that non-human animals have cognitive characteristics similar to human counting. 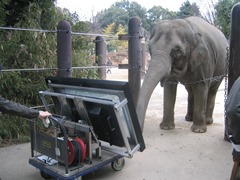 Previous research has shown that many animals have some form of numerical competence, even though they do not use language. However, this numerical ability is mainly based on inaccurate quantity instead of absolute numbers. In this study, the researchers aimed to replicate the results of previous research that already showed that Asian elephants have exceptional numeric competence.

Irie and her colleagues developed a new method to test how well the animals can judge relative quantity. They successfully trained a 14-year old Asian elephant called Authai from the Ueno Zoo in Japan to use a computer-controlled touch panel. The programme was specifically designed to examine the cognition of elephants, so that any unintended factors potentially influencing the results could be ruled out. Authai was presented with a relative numerosity judgment task on the screen, and then had to indicate with the tip of her trunk which one of the two figures shown to her at a time contained more items. These ranged from 0 to 10 items, and contained pictures of bananas, watermelons and apples. The fruit were not all presented in the same size, to ensure that Authai did not make her choices purely on the total area that was covered with illustrations per card.

Authai was rewarded whenever she chose the figures featuring the larger number of items. This she did correctly 181 out of 271 times – a success rate of 66.8 per cent. Her ability to accurately pinpoint the figure with the most fruits on it was not affected by the magnitude, distance or ratio of the comparisons. Authai’s reaction time was, however, influenced by the distance and ratio between the two figures presented. She needed significantly more time to make her selection between figures where relatively smaller distances and larger ratios were presented.

“We found that her performance was unaffected by distance, magnitude, or the ratios of the presented numerosities, but consistent with observations of human counting, she required a longer time to respond to comparisons with smaller distances,” explains Irie. “This study provides the first experimental evidence that nonhuman animals have cognitive characteristics partially identical to human counting.”

According to Irie, this is not an ability that the Asian elephant shares with the two species of African elephants. She says that because the species diverged more than 7.6 million years ago, it is highly probable that each developed different cognitive abilities.