When Is a Star Not a Star

The line that separates stars from brown dwarfs may soon be clearer thanks to new work led by Carnegie's Serge Dieterich. Published by the Astrophysical Journal, his team's findings demonstrate that brown dwarfs can be more massive than astronomers previously thought.

To shine bright, stars need the energy derived from the fusion of hydrogen atoms deep in their interiors. If too small, hydrogen fusion can't occur, so the object cools, darkens, and turns into something called a brown dwarf.

Many researchers are trying to determine the mass, temperature, and brightness of objects on both sides of this divide.

Artist's conception of the Epsilon Indi system. The two brown dwarfs orbit their common center of mass, which in turn orbits the much more distant primary component, a Sun-like star. By mapping the orbital motion of the brown dwarfs, the team was able to determine their masses. Much like our Solar System's giant planets, brown dwarfs are thought to have cloud belts that encircle the entire object and give it a striped appearance. 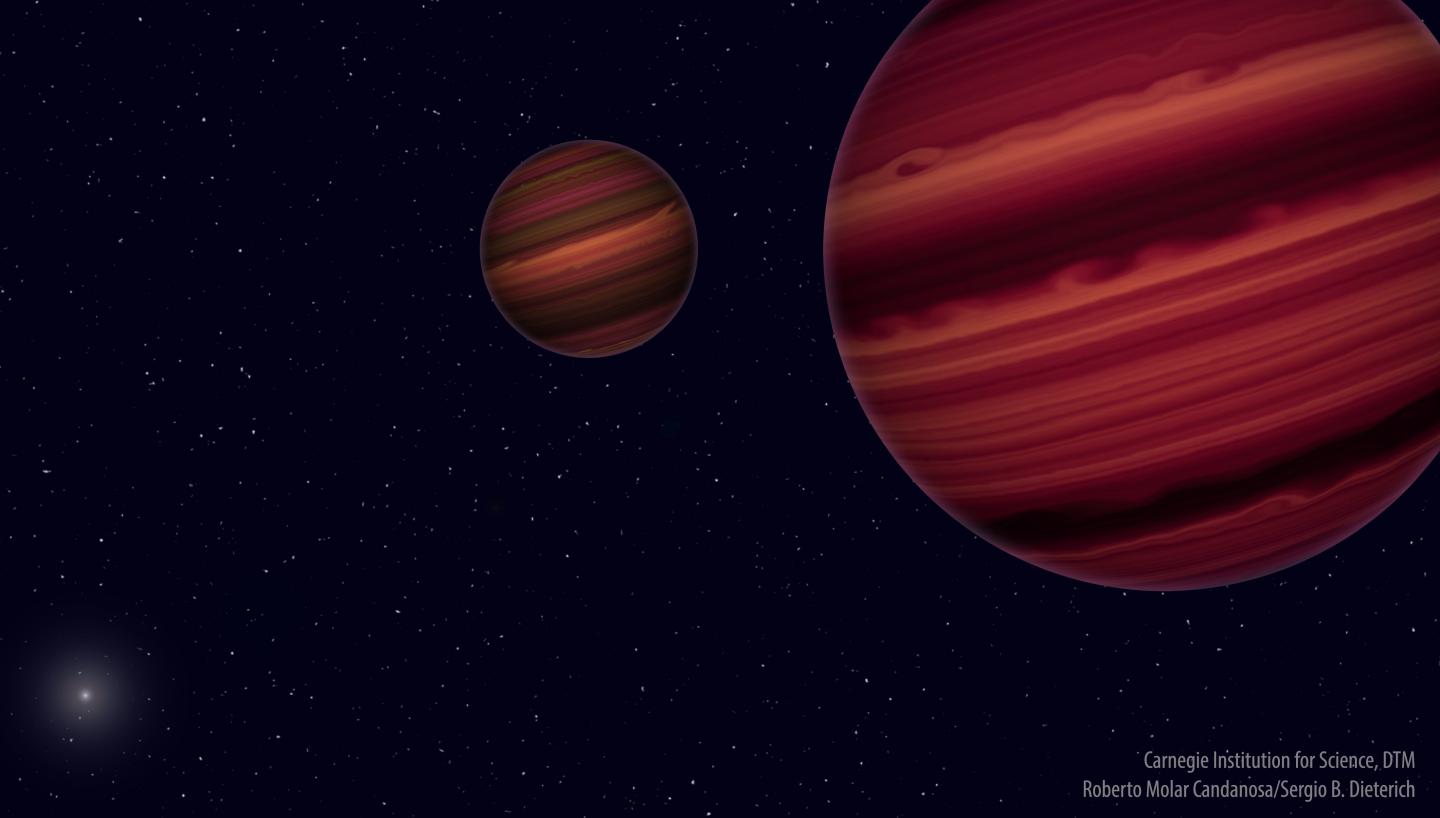 Illustration is by Roberto Molar Candanosa and Sergio Dieterich, courtesy of the Carnegie Institution for Science.

"Understanding the boundary that separates stars from brown dwarfs will improve our understanding of how both form and evolve, as well as whether or not they could possibly host habitable planets," Dieterich explained.

The latest theoretical models predict that the boundary separating stars from brown dwarfs occurs in objects that are between 70 to 73 times the mass of Jupiter, or about 7 percent the mass of our Sun, but the results from Dieterich and team question this prediction.

Dieterich's team observed two brown dwarfs, called Epsilon Indi B and Epsilon Indi C, that are part of a system that also includes a star of medium luminosity--Epsilon Indi A. The two brown dwarfs are much too faint to be stars, but their masses are respectively 75 and 70 times that of Jupiter, according to the researchers' findings.

The team accomplished these measurements using data from two long-term studies--the Carnegie Astrometric Planet Search at the Carnegie Las Campanas Observatory and the Cerro Tololo Inter-American Observatory Parallax Investigation run by the Research Consortium of Nearby Stars--which allowed them to detect the minute motions of the two brown dwarfs against the background of more-distant stars.

To the team's surprise, their findings put Episilon Indi B and C in what was previously considered the stellar realm, even though we know from other observations that they are not stars.

"Taken together, our results mean that the existing models need to be revised," Dieterich concluded. "We showed that the heaviest brown dwarfs and the lightest stars may only have slight differences in mass. But despite this, they are destined for different lives--one racing to dim and cool, the other shining for billions of years."

An improved definition of the dividing line between stars and brown dwarfs could also help astronomers determine how many of each exist in our own galaxy, added Weinberger.

"We are interested in whether stars and brown dwarfs always exist in the same proportion to each other in star-forming regions, which could help us understand the overall habitability of our galaxy," she said.

This work was supported by the National Science Foundation Astronomy and Astrophysics Postdoctoral Fellowship Program.

The CAPSCam astrometric planet search program is supported by the David W. Thompson Family Fund and the NSF. The CTIOPI program is made possible through the SMARTS Consortium and the NSF.