Scientists at the Medical University of South Carolina (MUSC) have uncovered mechanisms by which high levels of a hormone called FGF23 can reduce brain health.

In results published in the journal PLoS ONEon September 7th, 2018, high levels of fibroblast growth factor 23 (FGF23) were associated with structural changes in the brain's frontal lobes. High FGF23 levels are thought to lead to the vascular calcification seen in patients with chronic kidney disease. The study showed that such a process may also affect the brain in patients without chronic kidney disease but with elevated cardiovascular risk factors, according to Leonardo Bonilha, M.D., Ph.D., associate professor of neurology in the MUSC Department of Medicine and director of the study.

"We found that there is a relationship between high levels of FGF23 and a form of structural compromise in the brain," said Bonilha.

This is a whole brain reconstruction of the human structural connectome showing white matter connections between different brain regions. 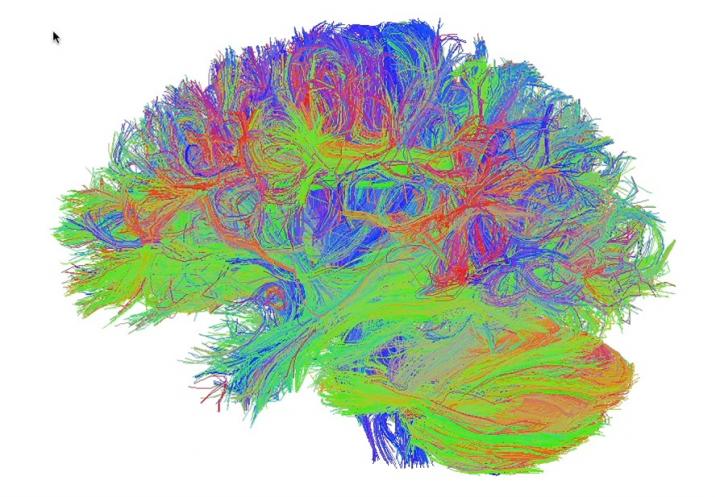 Credit: Barbara Marebwa and Leonardo Bonilha of the Medical University of South Carolina.

FGF23 is produced in the bone. Normally, FGF23 works in the kidneys and the gut to regulate levels of calcium and phosphate in the body. It is thought to be increased in people who eat a diet high in phosphates, which are often found in foods with preservatives. In people with chronic kidney disease or in those who consume a diet high in phosphates, can be a calcification of their arteries, which can cause heart attack or stroke. FGF23 may be the reason.

Bonilha and graduate student Barbara Marebwa were interested in knowing if FGF23 could cause brain problems in people who had elevated cardiovascular risk factors, such as high blood pressure, diabetes, or high cholesterol. The idea was to determine if a high FGF23 level, present in people who did not have chronic kidney disease, was an indicator of problems in the brain.

Bonilha and Marebwa tested the idea that FGF23 and cardiovascular risk factors put together were an indicator of problems with communication in different parts of the brain. They recruited 50 patients for the study, about half of whom had elevated cardiovascular risk factors and about half of whom did not. All of the patients had normal kidney function. The researchers used magnetic resonance imaging to examine the connectomes in patients' brains, which was a way to see how different regions of their brains were connected. The method allows researchers to examine the white matter of the brain, which is more vulnerable to the type of stress that can occur when vessels become calcified. The frontal lobes, which control learning and complex cognitive functions, have a particularly high density of white matter, and thus may be most vulnerable to this type of stress.

The team looked at a feature of the connectome called modularity, which can reveal how well different parts of the brain are organized. People with abnormally high modularity have higher levels of disconnection in the brain, which may indicate problems with brain health in those areas. The researchers found that, in patients with high levels of FGF23 and cardiovascular risk factors, modularity was also high. In patients without cardiovascular risk factors, FGF23 levels were not associated with increased modularity. These results mean that FGF23 is associated with problems with brain health in people who already have high blood pressure, diabetes, or high cholesterol. As a result, elevated FGF23 levels may lead to structural damage in parts of the brain that may put people at a higher risk of stroke or problems with stroke recovery.

"It is important to understand the factors that relate to brain health, because brain health is associated with aging and resilience to injury. For example, if you get a stroke and you already have compromised brain health, the stroke may be more severe and you may not recover as well," explained Bonilha.

The work was part of a strategically focused research network (SFRN) grant funded by the American Heart Association to MUSC to examine disparities in stroke recovery. Myles Wolf, holder of an SFRN grant in cardiac and kidney research at Duke, contributed to the work. Together, the research team may have found a potential disparity in stroke recovery by highlighting vulnerability in the brains of patients with high FGF23 levels. For example, people without access to fresh foods may have high levels of FGF23 and thus an increased risk of stroke.

The next step, according to Bonilha, is to determine if lowering FGF23 levels in patients with cardiovascular risk factors can lead to better brain health or even to better outcomes following stroke. Previous work in other laboratories has revealed that FGF23 levels are elevated in people with cardiovascular risk factors and who consume a diet high in phosphates. The new results build on this finding and highlight the importance of a healthy diet in protecting the brain.

"This study is an important first step to lead to strategies to improve dietary habits and improve brain health," said Bonilha.