The new study, led by Luís Amaral of the McCormick School of Engineering, will be published Sept. 17 by the journal Nature Human Behaviour. The findings potentially could be of interest to hiring managers and mental health care providers.

"People have tried to classify personality types since Hippocrates' time, but previous scientific literature has found that to be nonsense," said co-author William Revelle, professor of psychology in the Weinberg College of Arts and Sciences.

"Now, these data show there are higher densities of certain personality types," said Revelle, who specializes in personality measurement, theory and research.

Initially, however, Revelle was skeptical of the study's premise. The concept of personality types remains controversial in psychology, with hard scientific proof difficult to find. Previous attempts based on small research groups created results that often were not replicable.

"Personality types only existed in self-help literature and did not have a place in scientific journals," said Amaral, the Erastus Otis Haven Professor of Chemical and Biological Engineering at Northwestern Engineering. "Now, we think this will change because of this study."

The new research combined an alternative computational approach with data from four questionnaires with more than 1.5 million respondents from around the world obtained from John Johnson's IPIP-NEO with 120 and 300 items, respectively, the myPersonality project and the BBC Big Personality Test datasets. The questionnaires, developed by the research community over the decades, have between 44 and 300 questions. People voluntarily take the online quizzes attracted by the opportunity to receive feedback about their own personality. These data are now being made available to other researchers for independent analyses.

The four newly determined personality types are based on five widely-recognized character traits. 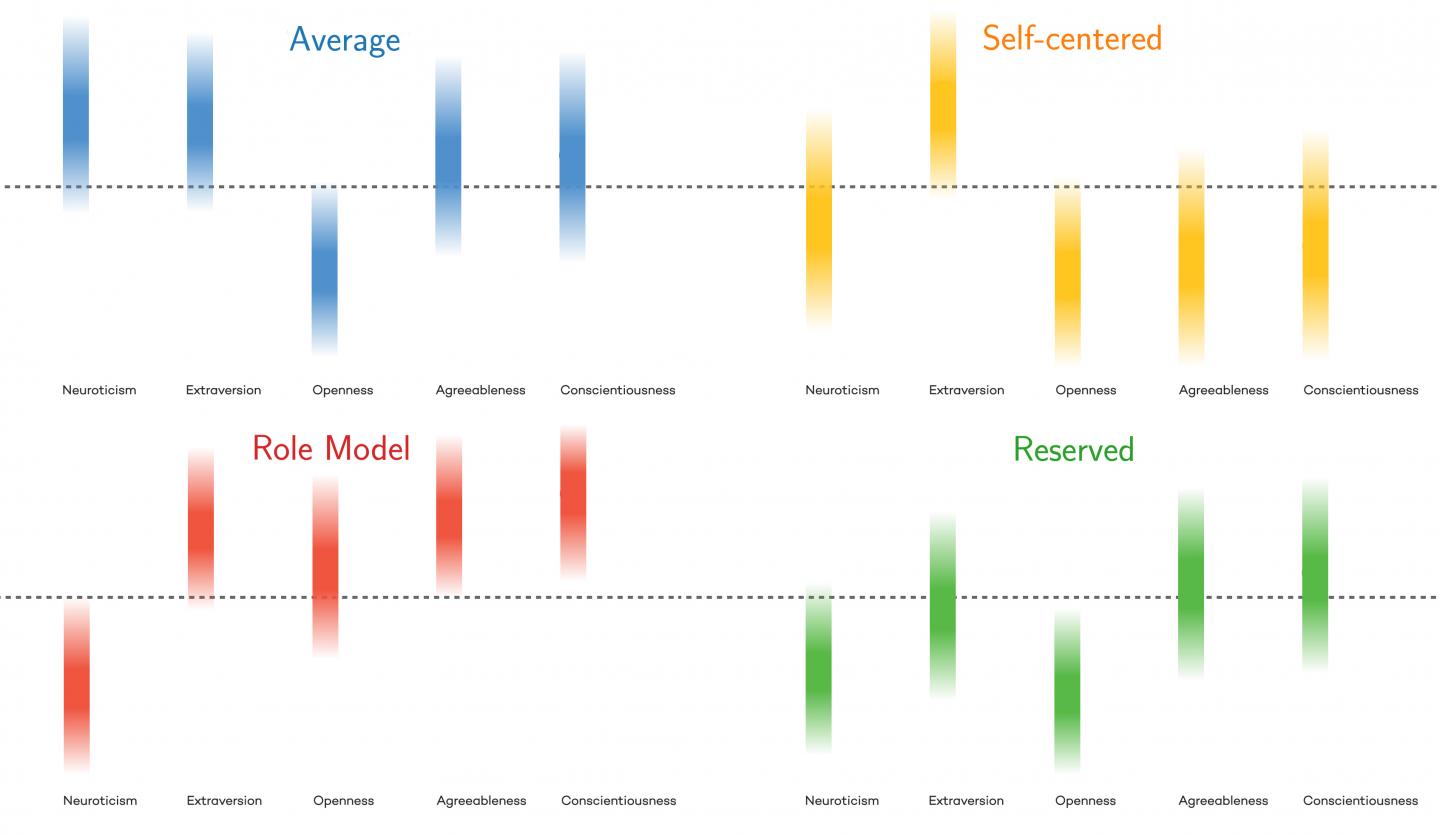 "The thing that is really, really cool is that a study with a dataset this large would not have been possible before the web," Amaral said. "Previously, maybe researchers would recruit undergrads on campus, and maybe get a few hundred people. Now, we have all these online resources available, and now data is being shared."


AverageAverage people are high in neuroticism and extraversion, while low in openness. "I would expect that the typical person would be in this cluster," said Martin Gerlach, a postdoctoral fellow in Amaral's lab and the paper's first author. Females are more likely than males to fall into the Average type.


ReservedThe Reserved type is emotionally stable, but not open or neurotic. They are not particularly extraverted but are somewhat agreeable and conscientious.


Role ModelsRole Models score low in neuroticism and high in all the other traits. The likelihood that someone is a role model increases dramatically with age. "These are people who are dependable and open to new ideas," Amaral said. "These are good people to be in charge of things. In fact, life is easier if you have more dealings with role models." More women than men are likely to be role models.


Self-CenteredSelf-Centered people score very high in extraversion and below average in openness, agreeableness and conscientiousness. "These are people you don't want to hang out with," Revelle said. There is a very dramatic decrease in the number of self-centered types as people age, both with women and men.

"At first, they came to me with 16 personality types, and there's enough literature that I'm aware of that says that's ridiculous," Revelle said. "I believed there were no types at all."

He challenged Amaral and Gerlach to refine their data.

Northwestern University researchers have sifted through data from more than 1.5 million questionnaire respondents and found at least four distinct clusters of personality types.

"Machine learning and data science are promising but can be seen as a little bit of a religion," Amaral said. "You still need to test your results. We developed a new method to guide people to solve the clustering problem to test the findings."

Their algorithm first searched for many clusters using traditional clustering methods, but then winnowed them down by imposing additional constraints. This procedure revealed the four groups they reported.

"The data came back, and they kept coming up with the same four clusters of higher density and at higher densities than you'd expect by chance, and you can show by replication that this is statistically unlikely," Revelle said.

"I like data, and I believe these results," he added. "The methodology is the main part of the paper's contribution to science."

To be sure the new clusters of types were accurate, the researchers used a notoriously self-centered group -- teenaged boys -- to validate their information.

"We know teen boys behave in self-centered ways," Amaral said. "If the data were correct and sifted for demographics, they would they turn out to be the biggest cluster of people."

Indeed, young males are overrepresented in the Self-Centered group, while females over 15 years old are vastly underrepresented.

Along with serving as a tool that can help mental health service providers assess for personality types with extreme traits, Amaral said the study's results could be helpful for hiring managers looking to insure a potential candidate is a good fit or for people who are dating and looking for an appropriate partner.

And good news for parents of teenagers everywhere: As people mature, their personality types often shift. For instance, older people tend to be less neurotic yet more conscientious and agreeable than those under 20 years old.

"When we look at large groups of people, it's clear there are trends, that some people may be changing some of these characteristics over time," Amaral said. "This could be a subject of future research."