The Earth is currently surrounded by debris launched into space over several decades. This space junk can collide with satellites and not only cause damage to spacecraft but also result in further debris being created.

To preserve a secure space environment, the active removal or de-orbiting of space debris is an emergent technological challenge. If remedial action is not taken in the near future it will be difficult to sustain human space activities. To overcome this issue, several methods for the removal and de-orbiting of debris have been proposed so far; classified as either contact (e.g., robotic arm, tether net, electrodynamic tether) or contactless methods (e.g., laser, ion beam shepherd), with the contactless methods proving to be more secure.

A concept for space debris removal by bi-directional momentum ejection from a satellite. (Figure 1) 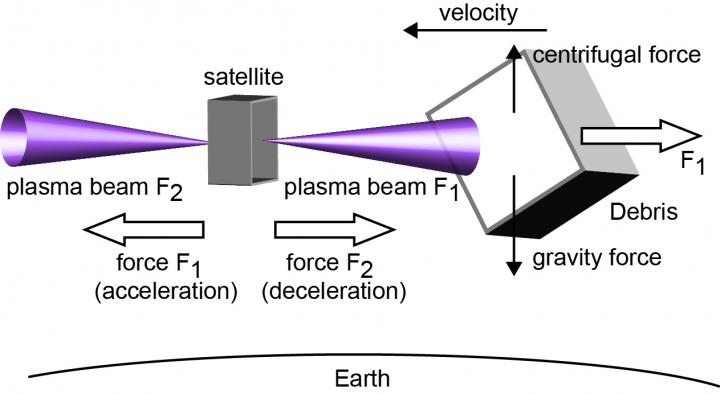 The ion beam shepherd contactless method uses a plasma beam ejected from the satellite to impart a force to the debris thereby decelerating it, which results in it falling to a lower altitude, re-entering the Earth's atmosphere and burning up naturally. However, ejecting the plasma beam toward the debris accelerates the satellite in the opposite direction, which makes it difficult to maintain a consistent distance between debris and the satellite.

To safely and effectively remove debris, two propulsion systems have to be mounted on the satellite to eject bi-directional plasma beams (Figure 1). This interferes with a satellite system integration requiring the reduction of a satellite's weight and size. 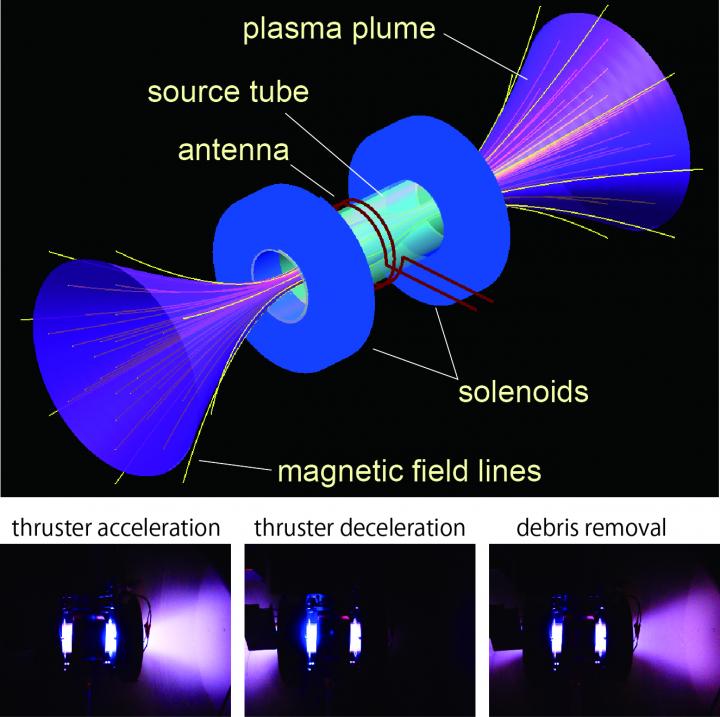 "If the debris removal can be performed by a single high-power propulsion system, it will be of significant use for future space activity," said Associate Professor Kazunori Takahashi from Tohoku University in Japan, who is leading research on new technology to remove space debris in collaboration with colleagues at the Australian National University.

The Japanese and Australian research group has demonstrated that a helicon plasma thruster can yield the space debris removal operation using a single propulsion system (Figure 2). In the laboratory experiment, the bi-directional ejection of plasma plumes from the single plasma thruster was precisely controlled with a magnetic field and gas injection; then the decelerating force imparted to an object simulating debris was measured whilst maintaining the zero-net force to the thruster (and satellite). The system, having the single plasma thruster, can be operational in three operational modes: acceleration of the satellite; deceleration of the satellite; and debris removal.

"The helicon plasma thruster is an electrodeless system, which allows it to undertake long operations performed at a high-power level." says Takahashi, "This discovery is considerably different to existing solutions and will make a substantial contribution to future sustainable human activity in space."