A new study, just published in the journal Science, shows that more than 40 years after the first initiatives were taken to ban the use of PCBs, the chemical pollutants remain a deadly threat to animals at the top of the food chain

When foreign hazardous substances enter the marine environment, they are assimilated into the first link in the food chain, phytoplankton. The phytoplankton is consumed by zooplankton, which in turn is consumed by smaller fish, etc. The chemicals accumulate in each link of the food chain, and this means that killer whales that feed on large animals in contaminated areas may contain concentrations of PCBs so high that the survival of the species is threatened. Killer whales that primarily feed on smaller fish are not threatened in the same way. 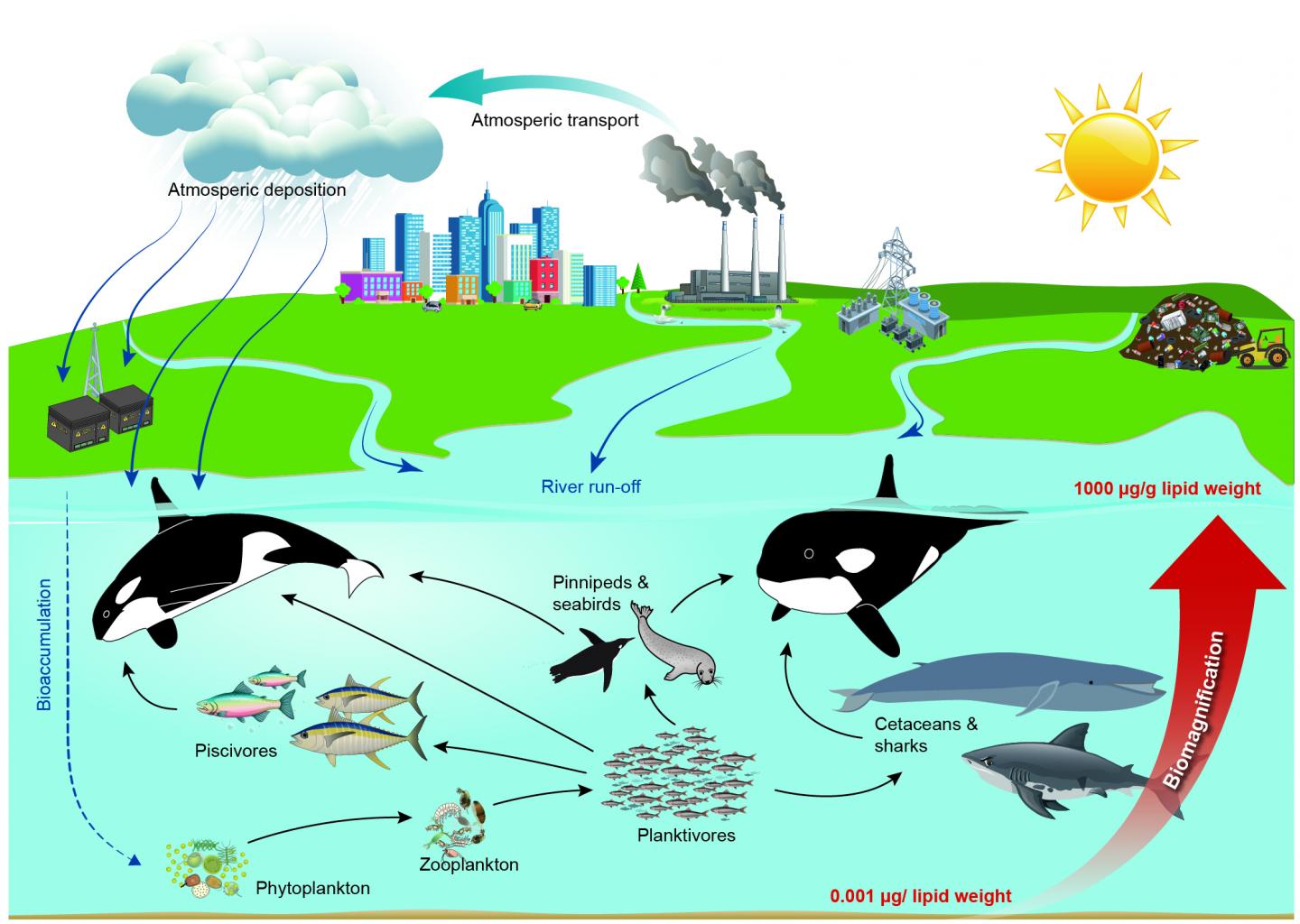 More than forty years after the first initiatives were taken to ban the use of PCBs, the chemical pollutants remain a deadly threat to animals at the top of the food chain. A new study, just published in the journal Science, shows that the current concentrations of PCBs can lead to the disappearance of half of the world's populations of killer whales from the most heavily contaminated areas within a period of just 30-50 years.

Killer whales (Orcinus orca) form the last link in a long food chain and are among the mammals with the highest level of PCBs (polychlorinated biphenyls) in their tissue. Researchers have measured values as high as 1300 milligrams per kilo in the fatty tissue (blubber) of killer whales. For comparison, a large number of studies show that animals with PCB levels as low as 50 milligrams per kilo of tissue may show signs of infertility and severe impacts on the immune system. 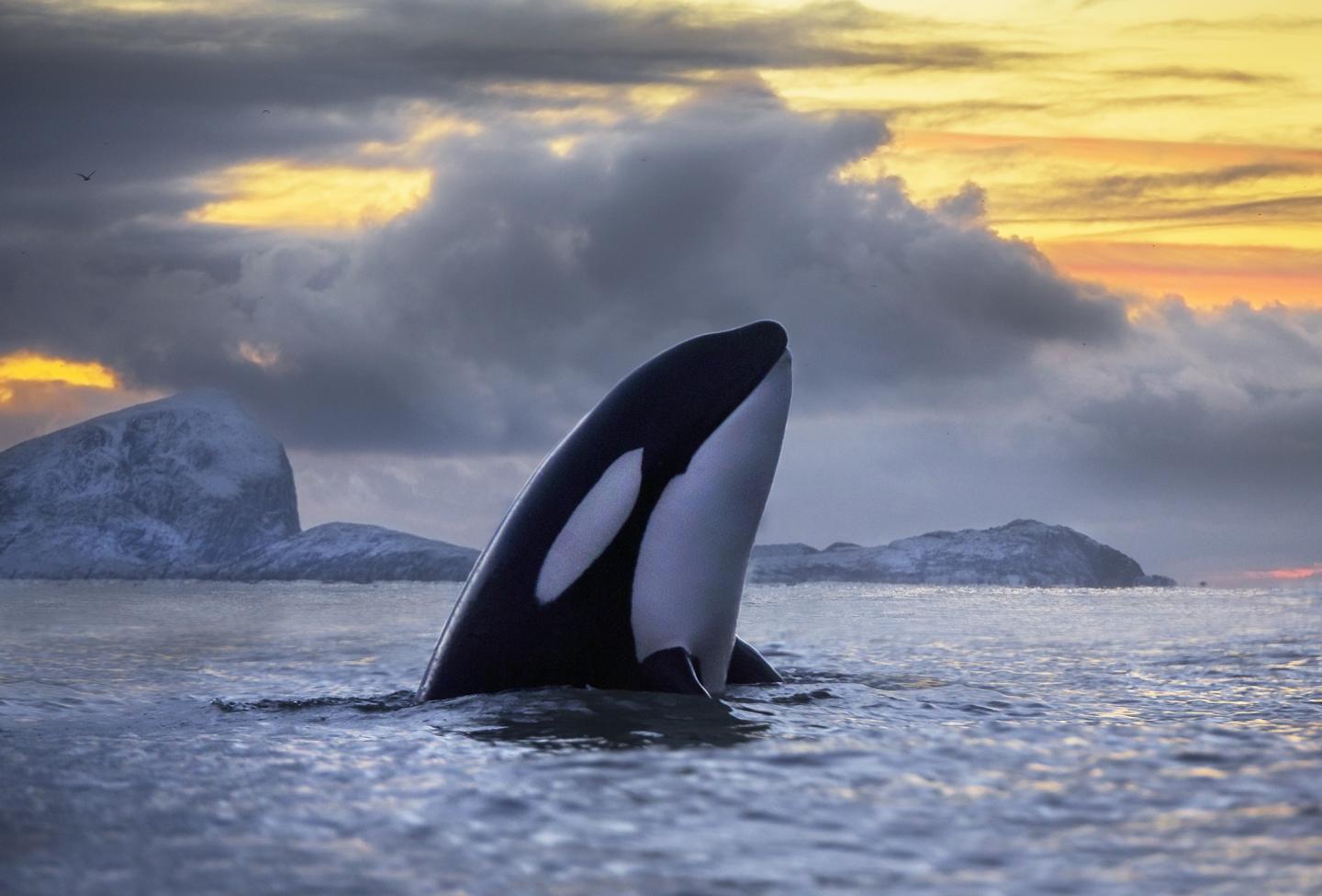 
Together with colleagues from a wide range of international universities and research institutions, researchers from Aarhus University have documented that the number of killer whales is rapidly declining in 10 out of the 19 killer whale populations investigated and that the species may disappear entirely from several areas within a few decades.

Killer whales are particularly threatened in heavily contaminated areas like the waters near Brazil, the Strait of Gibraltar and around the UK. Around the British Isles, the researchers estimate that the remaining population counts less than 10 killer whales. Also along the east coast of Greenland, killer whales are effected due to the high consumption of sea mammals like seals.

PCBs accumulate in the food chain

The killer whale is one of the most widespread mammals on Earth and is found in all of the world's oceans from pole to pole. But today, only the populations living in the least polluted areas possess a large number of individuals.

Overfishing and man-made noise may also affect the health of the animals, but PCBs particularly can have a dramatic effect on the reproduction and immune system of the killer whales.

By collecting data from around the world and loading them into population models, the researchers can see that 10 out of 19 populations of killer whales are affected by high levels of PCBs in their body. PCBs particularly affect the reproduction and immune system of the whales. The situation is worst in the oceans around Brazil and the UK where the model predicts that populations have been cut in half over the first decades since the use of PCBs became widespread. Here, the models predict a high risk that the species will disappear within a 30-40-year period. The line indicates median values, while the shaded field shows the variation. 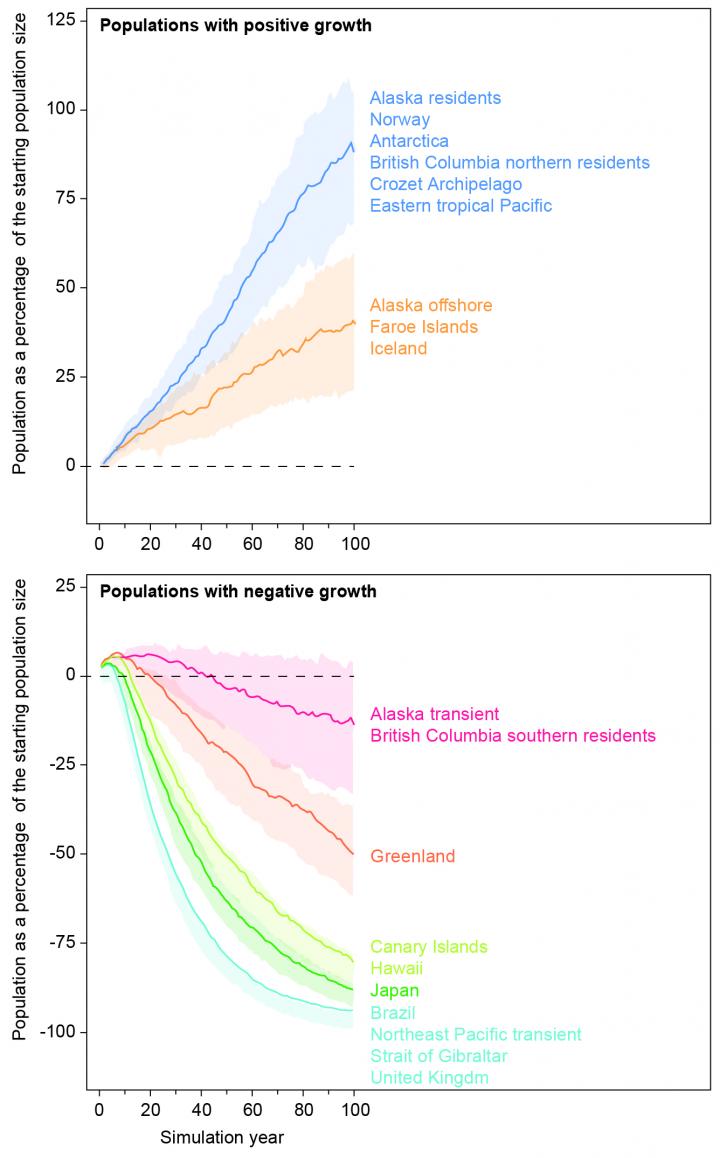 Killer whales whose diet includes, among other items, seals and large fish such as tuna and sharks critical accumulate PCBs and other pollutants stored at successive levels of the food chain. It is these populations of killer whales that have the highest PCB concentrations and it is these populations that are at the highest risk of population collapse. Killer whales that primarily feed on small-sized fish such as herring and mackerel have a significantly lower content of PCBs and are thus at lower risk of effects.

PCBs have been used around the world since the 1930s. More than one million tonnes of PCBs were produced and used in, among other things, electrical components and plastics. Together with DDT and other organic pesticides - PCBs have spread around the global oceans.

Through the 1970s and 1980s, PCBs were banned in several countries and in 2004, through the Stockholm Convention, more than 90 countries have committed themselves to phase out and dispose of the large stocks of PCBs.

PCBs are only slowly decomposed in the environment. Moreover, PCBs are passed down from the mother orca to its offspring through the mother's fat-rich milk. This means that the hazardous substances remain in the bodies of the animals, instead of being released into the environment where they eventually deposit or degrade.

"We know that PCBs deform the reproductive organs of animals such as polar bears. It was therefore only natural to examine the impact of PCBs on the scarce populations of killer whales around the world," says Professor Rune Dietz from the Department of Bioscience and Arctic Research Centre, Aarhus University, who initiated the killer whale studies and is co-author of the article.

The research group, which includes participants from the United States, Canada, England, Greenland, Iceland and Denmark, reviewed all the existing literature and compared all data with their own most recent results. This provided information about PCB levels in more than 350 individual killer whales around the globe - the largest number of killer whales ever studied.

Applying models, the researchers then predicted the effects of PCBs on the number of offspring as well as on the immune system and mortality of the killer whale over a period of 100 years.

More than 50% of the populations under threat

"The findings are surprising. We see that over half of the studied killer whales populations around the globe are severely affected by PCBs" says postdoc Jean-Pierre Desforges from Aarhus University, who led the investigations.

The effects result in fewer and fewer animals over time in these populations. The situation is worst in the oceans around Brazil, the Strait of Gibraltar, the northeast Pacific and around the UK. Here, the models show that the populations have virtually been halved during the half century where PCBs have been present.

"In these areas, we rarely observe newborn killer whales," says Ailsa Hall, who together with Bernie McConnell developed the models used by Sea Mammal Research Unit in Scotland.

"As the effects have been recognized for more than 50 years, it is frightening to see that the models predict a high risk of population collapse in these areas within a period of 30-40 years," says Jean-Pierre Desforges.

A female killer whale may live for 60-70 years, and although the world took its first steps to phase out PCBs more than 40 years ago, killer whales still have high levels of PCBs in their bodies.

"This suggests that the efforts have not been effective enough to avoid the accumulation of PCBs in high trophic level species that live as long as the killer whale does. There is therefore an urgent need for further initiatives than those under the Stockholm Convention," concludes Paul D. Jepson, Institute of Zoology, Zoological Society of London, England, who is another killer whale expert and co-author of the article.

In the oceans around the Faroe Islands, Iceland, Norway, Alaska and the Antarctic, the prospects are not so gloomy. Here, killer whale populations grow and the models predict that they will continue to do so throughout the next century.