Breaking the bonds between oxygen and hydrogen in water could be a key to the creation of hydrogen in a sustainable manner, but finding an economically viable technique for this has proved difficult. Researchers report a new hydrogen-generating catalyst that clears many of the obstacles – abundance, stability in acid conditions and efficiency.

In the journal Angewandte Chemie, researchers from the University of Illinois at Urbana-Champaign report on an electrocatalytic material made from mixing metal compounds with substance called perchloric acid.

Electrolyzers use electricity to break water molecules into oxygen and hydrogen. The most efficient of these devices use corrosive acids and electrode materials made of the metal compounds iridium oxide or ruthenium oxide. Iridium oxide is the more stable of the two, but iridium is one of the least abundant elements on Earth, so researchers are in search of an alternative material. 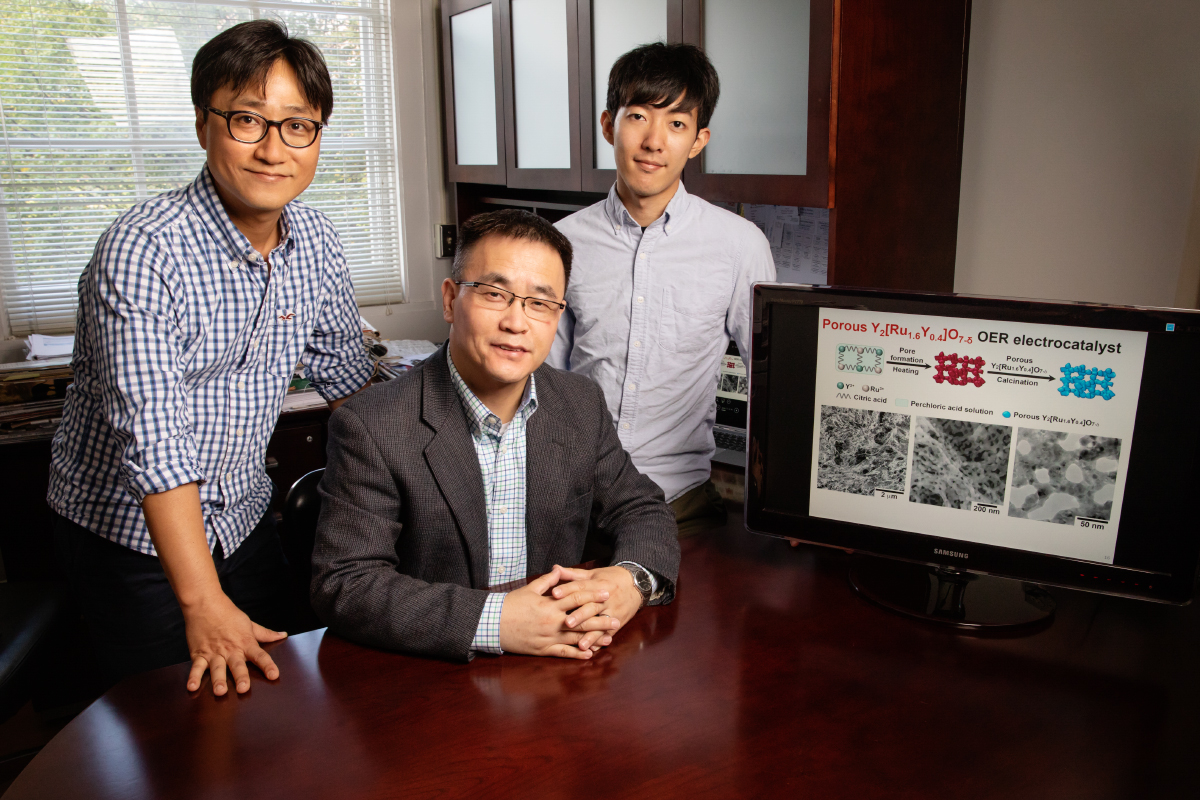 “Much of the previous work was performed with electrolyzers made from just two elements – one metal and oxygen,” said Hong Yang, a co-author and professor of chemical and biomolecular engineering at Illinois. “In a recent study, we found if a compound has two metal elements – yttrium and ruthenium – and oxygen, the rate of water-splitting reaction increased.”

Yao Qin, a co-author and former member of Yang’s group, first experimented with the procedure for making this new material by using different acids and heating temperatures to increase the rate of the water-splitting reaction.

The researchers found that when they used perchloric acid as a catalyst and let the mixture react under heat, the physical nature of the yttrium ruthenate product changed.

“The material became more porous and also had a new crystalline structure, different from all the solid catalysts we made before,” said Jaemin Kim, the lead author and a postdoctoral researcher. The new porous material the team developed – a pyrochlore oxide of yttrium ruthenate – can split water molecules at a higher rate than the current industry standard.

“Because of the increased activity it promotes, a porous structure is highly desirable when it comes electrocatalysts,” Yang said. “These pores can be produced synthetically with nanometer-sized templates and substances for making ceramics; however, those can’t hold up under the high-temperature conditions needed for making high-quality solid catalysts.”

Yang and his team looked at the structure of their new material with an electron microscope and found that it is four times more porous than the original yttrium ruthenate they developed in a previous study, and three times that of the iridium and ruthenium oxides used commercially.

“It was surprising to find that the acid we chose as a catalyst for this reaction turned out to improve the structure of the material used for the electrodes,” Yang said. “This realization was fortuitous and quite valuable for us.”

The next steps for the group are to fabricate a laboratory-scale device for further testing and to continue to improve the porous electrode stability in acidic environments, Yang said.

“Stability of the electrodes in acid will always be a problem, but we feel that we have come up with something new and different when compared with other work in this area,” Yang said. “This type of research will be quite impactful regarding hydrogen generation for sustainable energy in the future.”

Citation: r “A porous pyrochlore Y2[Ru1.6Y0.4]O7–g electrocatalyst for enhanced performance towards the oxygen evolution reaction in acidic media” is available online and from the U. of I. News Bureau.