A new species of a giant dinosaur has been found in South Africa's Free State Province. The plant-eating dinosaur, named Ledumahadi mafube, weighed 12 tonnes and stood about four metres high at the hips. Ledumahadi mafube was the largest land animal alive on Earth when it lived, nearly 200 million years ago. It was roughly double the size of a large African elephant.

A team of international scientists, led by University of the Witwatersrand (Wits) palaeontologist Professor Jonah Choiniere, described the new species in the journal Current Biology today.

The dinosaur's name is Sesotho for "a giant thunderclap at dawn" (Sesotho is one of South Africa's 11 official languages and an indigenous language in the area where the dinosaur was found).

The Highland Giant: Artist Viktor Radermacher's reconstuction of what Ledumahadi mafube may have looked like. Another South African dinosaur, Heterodontosaurus tucki, watches in the foreground. 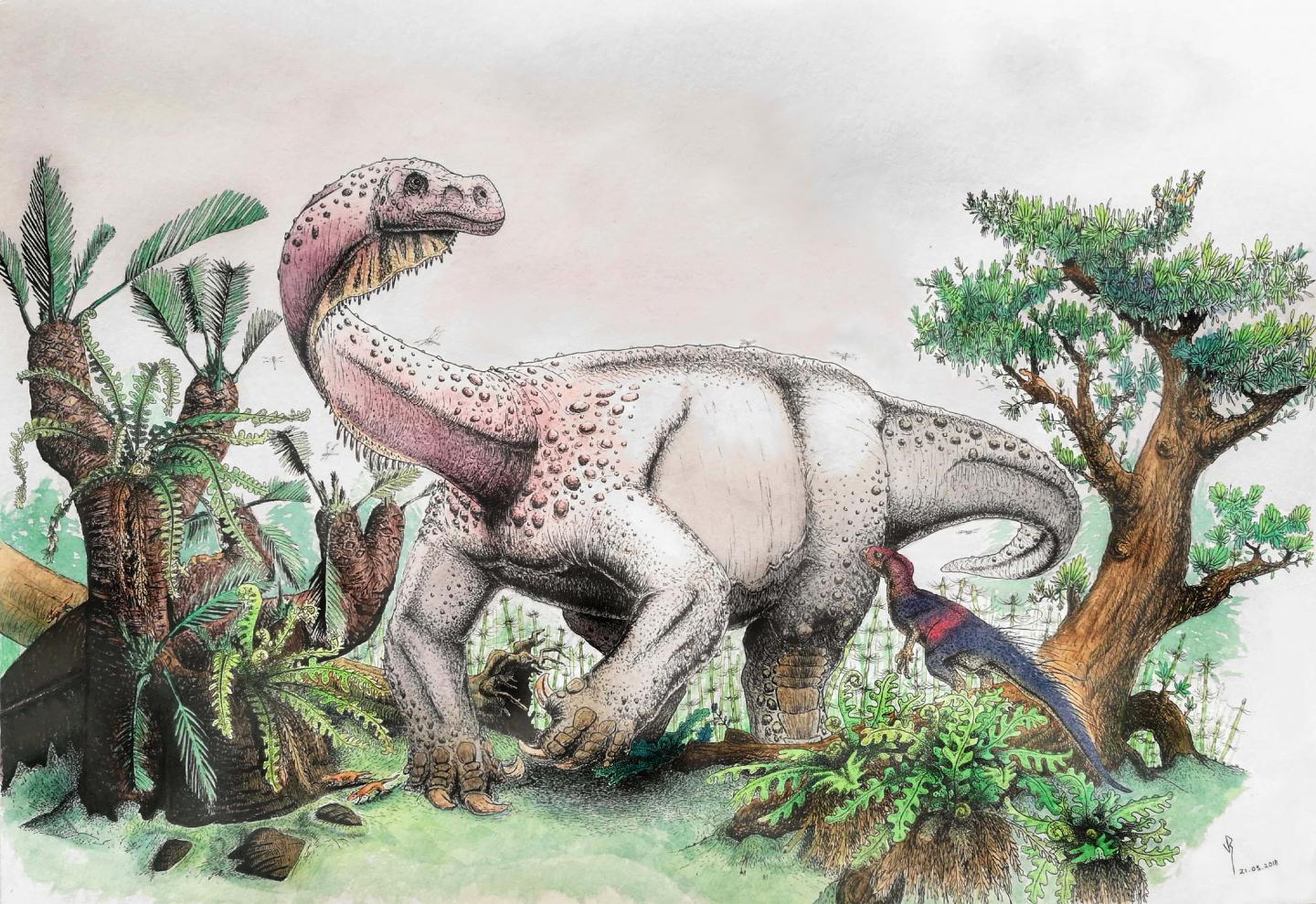 "The name reflects the great size of the animal as well as the fact that its lineage appeared at the origins of sauropod dinosaurs," said Choiniere. "It honours both the recent and ancient heritage of southern Africa."

Ledumahadi mafube is one of the closest relatives of sauropod dinosaurs. Sauropods, weighing up to 60 tonnes, include well-known species like Brontosaurus. All sauropods ate plants and stood on four legs, with a posture like modern elephants. Ledumahadi evolved its giant size independently from sauropods, and although it stood on four legs, its forelimbs would have been more crouched. This caused the scientific team to consider Ledumahadi an evolutionary "experiment" with giant body size.

Ledumahadi's fossil tells a fascinating story not only of its individual life history, but also the geographic history of where it lived, and of the evolutionary history of sauropod dinosaurs.

"The first thing that struck me about this animal is the incredible robustness of the limb bones," says lead author, Dr Blair McPhee. "It was of similar size to the gigantic sauropod dinosaurs, but whereas the arms and legs of those animals are typically quite slender, Ledumahadi's are incredibly thick. To me this indicated that the path towards gigantism in sauropodomorphs was far from straightforward, and that the way that these animals solved the usual problems of life, such as eating and moving, was much more dynamic within the group than previously thought."

The research team developed a new method, using measurements from the "arms" and "legs" to show that Ledumahadi walked on all fours, like the later sauropod dinosaurs, but unlike many other members of its own group alive at its time such as Massospondylus. The team also showed that many earlier relatives of sauropods stood on all fours, that this body posture evolved more than once, and that it appeared earlier than scientists previously thought.

Ledumahadi mafube is the first of the giant sauropodomorphs of the Jurassic. 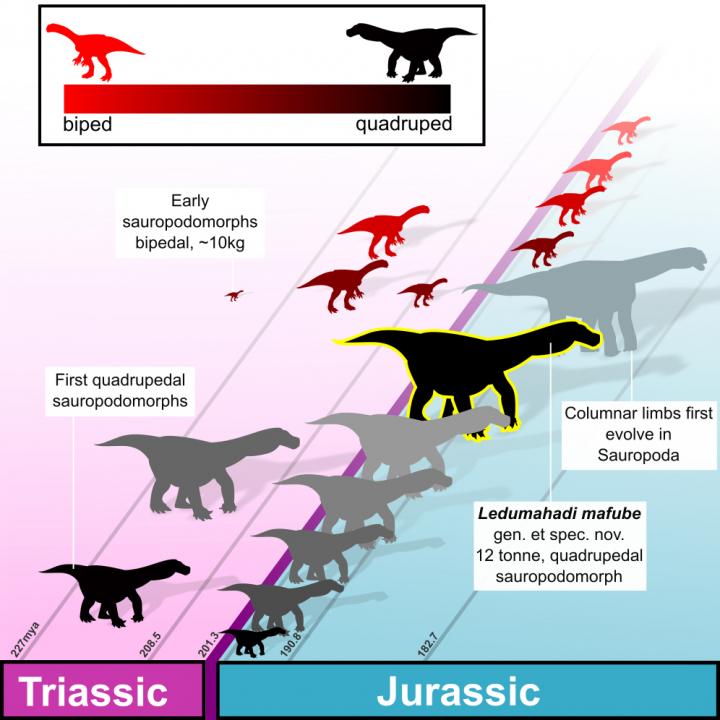 "Many giant dinosaurs walked on four legs but had ancestors that walked on two legs. Scientists want to know about this evolutionary change, but amazingly, no-one came up with a simple method to tell how each dinosaur walked, until now," says Dr Roger Benson.

"We can tell by looking at the fossilised bone microstructure that the animal grew rapidly to adulthood. Closely-spaced, annually deposited growth rings at the periphery show that the growth rate had decreased substantially by the time it died," says Botha-Brink. This indicates that the animal had reached adulthood.

"It was also interesting to see that the bone tissues display aspects of both basal sauropodomorphs and the more derived sauropods, showing that Ledumahadi represents a transitional stage between these two major groups of dinosaurs."

Ledumahadi lived in the area around Clarens in South Africa's Free State Province. This is currently a scenic mountainous area, but looked much different at that time, with a flat, semi-arid landscape and shallow, intermittently dry streambeds.

"We can tell from the properties of the sedimentary rock layers in which the bone fossils are preserved that 200 million years ago most of South Africa looked a lot more like the current region around Musina in the Limpopo Province of South Africa, or South Africa's central Karoo," says Dr Emese Bordy.

Ledumahadi is closely related to other gigantic dinosaurs from Argentina that lived at a similar time, which reinforces that the supercontinent of Pangaea was still assembled in the Early Jurassic. "It shows how easily dinosaurs could have walked from Johannesburg to Buenos Aires at that time," says Choiniere.

South Africa's Minister of Science and Technology Mmamoloko Kubayi-Ngubane says the discovery of this dinosaur underscores just how important South African palaeontology is to the world.

Closely spaced growth rings at the periphery of the fossil show that the animal is an adult. 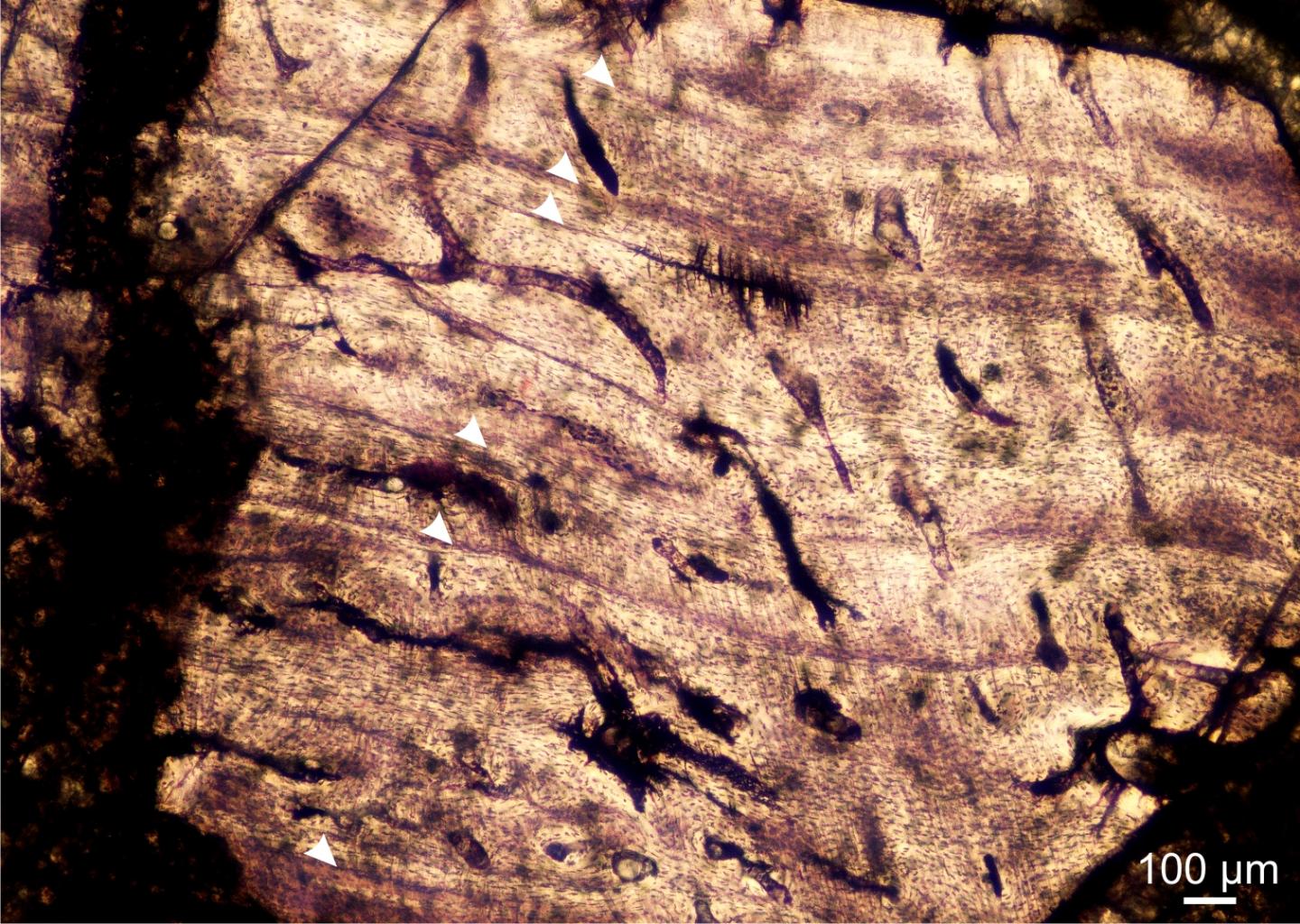 "Not only does our country hold the Cradle of Humankind, but we also have fossils that help us understand the rise of the gigantic dinosaurs. This is another example of South Africa taking the high road and making scientific breakthroughs of international significance on the basis of its geographic advantage, as it does in astronomy, marine and polar research, indigenous knowledge, and biodiversity," says Kubayi-Ngubane.

The project also had a strong international component with the collaboration of Professor Roger BJ Benson of Oxford University and Dr Blair McPhee, currently residing in Brazil.

"South Africa employs some of the world's top palaeontologists and it was a privilege to be able to build a working group with them and leading researchers in the UK," says Choiniere, who recently emigrated from the USA to South Africa. "Dinosaurs didn't observe international boundaries and it's important that our research groups don't either."

The artwork that illustrates Ledumahadi was done by Wits M.Sc. student (Palaeontology), Viktor Radermacher, who is fast becoming recognised as both a palaeoscientist and palaeoartist. His work has been on display earlier this year in international publications on Shartegosuchus as well as the recent publication on Chinese alvarezsaurs, another international collaboration involving Choiniere.

Contacts and sources:
Schalk MoutonUniversity of the Witwatersrand (Wits)