Two of the closest galaxies to the Milky Way—the Large and Small Magellanic Clouds—may have had a third companion, astronomers believe.

Research published today describes how another “luminous” galaxy was likely engulfed by the Large Magellanic Cloud some three to five billion years ago.

The Large Magellanic Cloud photographed using a small telephoto lens and a modified DSLR camera to highlight the molecular clouds. 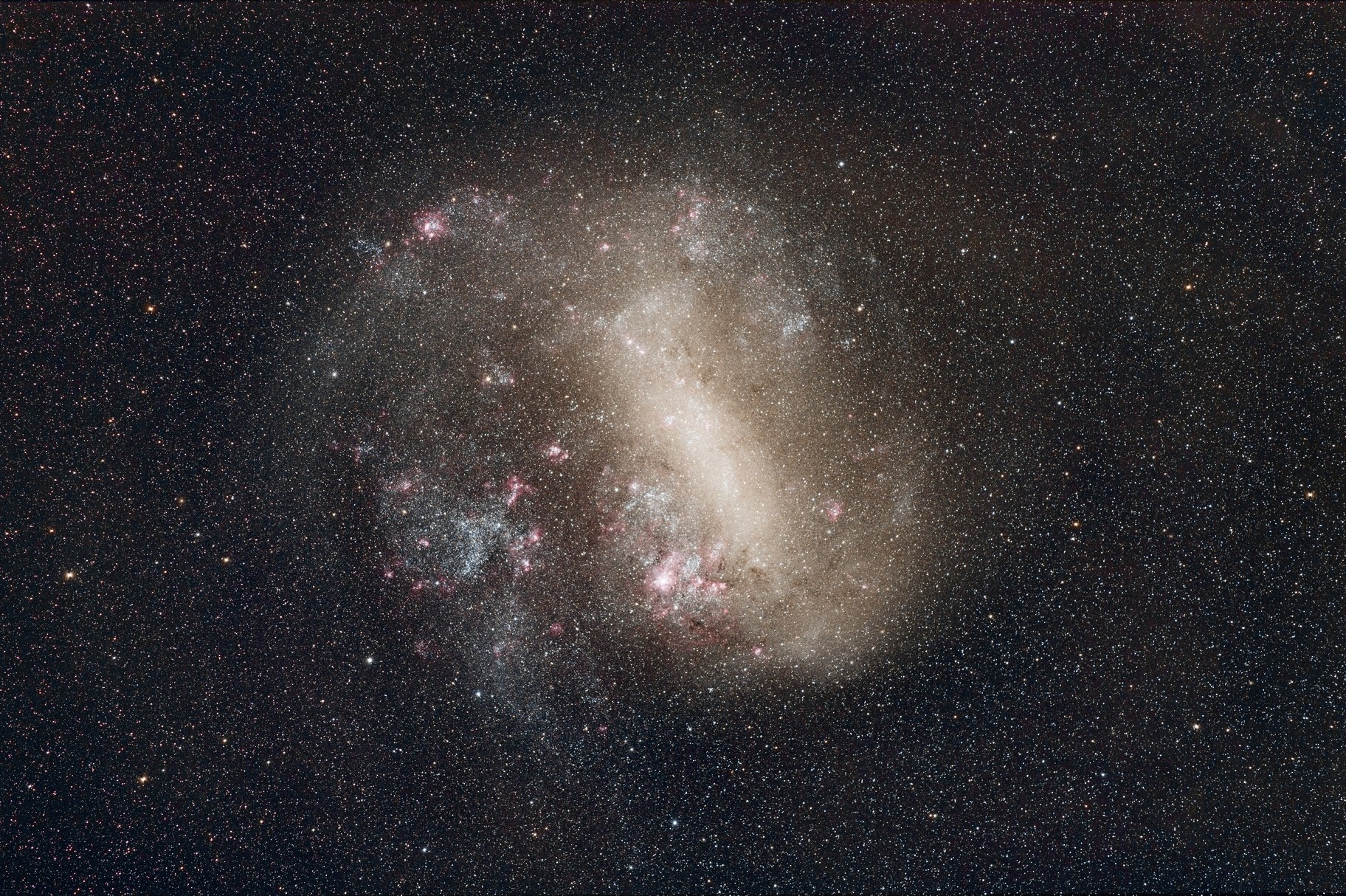 ICRAR Masters student Benjamin Armstrong, the lead author on the study, said most stars in the Large Magellanic Cloud rotate clockwise around the centre of the galaxy.

But, unusually, some stars rotate anti-clockwise.

“For a while, it was thought that these stars might have come from its companion galaxy, the Small Magellanic Cloud,” Mr Armstrong said.

“Our idea was that these stars might have come from a merger with another galaxy in the past.”

Mr Armstrong, who is based at The University of Western Australia, used computer modelling to simulate galaxy mergers.

“What we found is that in this sort of merging event, you actually can get quite strong counter-rotation after a merger takes place,” he said.

“This is consistent with what we see when we actually observe the galaxies.”

The Magellanic Clouds can be seen in the night sky with the naked eye and have been observed by ancient cultures for thousands of years.

The Large and Small Magellanic Clouds 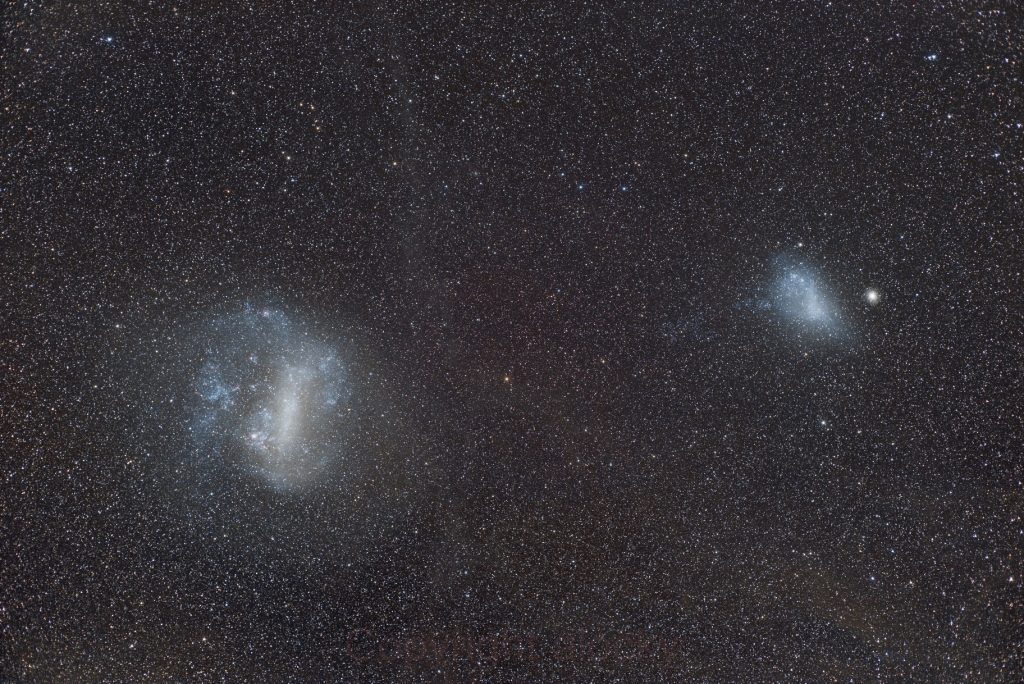 Mr Armstrong said the finding could help to explain a problem that has perplexed astronomers for years—why stars in the Large Magellanic Cloud are generally either very old or very young.

“In galaxies, there are these large objects called star clusters,” he said.

“Star clusters contain many, many, many stars that are all of quite similar ages and made in similar environments.

“In the Milky Way, the star clusters are all very old.

Stars in the Large Magellanic Cloud (blue) and a counter-rotating dwarf galaxy (red) as they merge over 1.4 billion years. The direction of rotation for each galaxy has been highlighted by a selected star (yellow).
Credit: Ben Armstrong, ICRAR/UWA.

“But in the Large Magellanic Cloud, we have very old clusters as well as ones that are very young—but nothing in between.”

This is known as the ‘age-gap’ problem, Mr Armstrong said.

“Because in the Large Magellanic Cloud we see star formation starting again, that could be indicative of a galaxy merger taking place,” he said.

Mr Armstrong said the finding could also help explain why the Large Magellanic Cloud appears to have a thick disk.

An inverse luminance image of the large and small clouds, effectively two hours of exposure using a tracked DSLR and 50mm lens showing tidal shells around the LMC, a bridge of stars linking the two and galactic cirrus in the foreground. 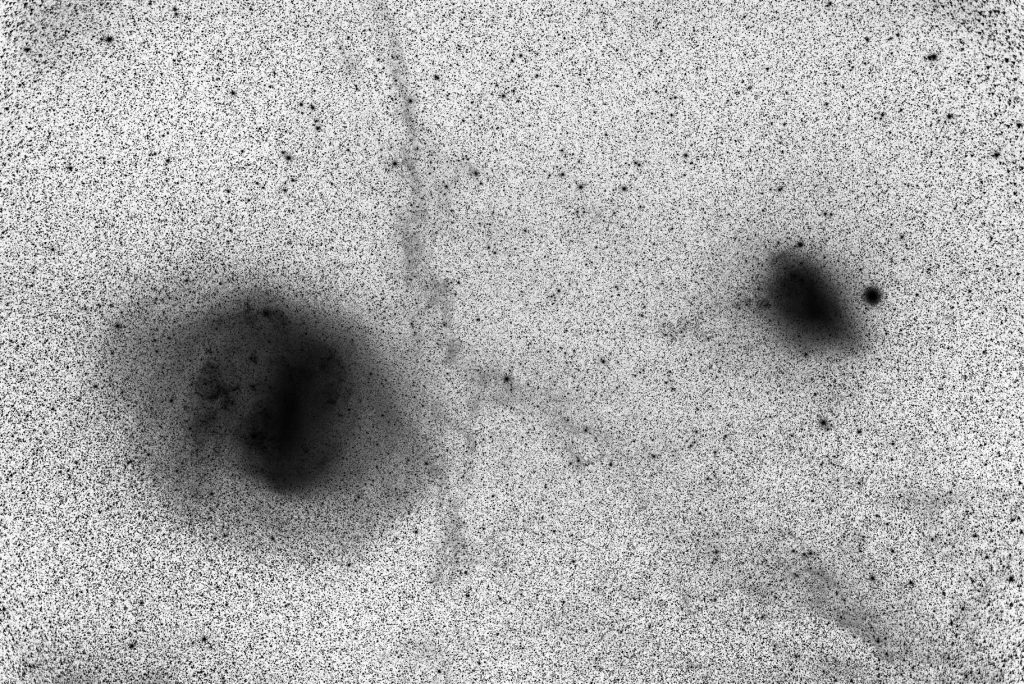 “Our work is still very preliminary but it does suggest that this sort of process could have been responsible for the thicker disk in the past,” he said.

Mr Armstrong said the research was about asking pertinent questions that astronomers could start examining.

“It’s about creating a new idea, a new way of looking at an old problem,” he said.

The study was released in the journal Monthly Notices of the Royal Astronomical Society, published by Oxford University Press.

Citation: ‘‘Formation of a counter-rotating stellar population in the Large Magellanic Cloud: a Magellanic triplet system?’, published in The Monthly Notices of the Royal Astronomical Society on September 18th, 2018.