Know Someone Sick? Your Own Smell Might Give It Away

Bodily odors of healthy animals change when they are near sick animals.

Odors surround us, providing cues about many aspects of personal identity, including health status. Now, research from the Monell Center extends the scope and significance of personal odors as a source of information about an individual's health. A new paper in the open-access journal Scientific Reports reveals that the bodily odors of otherwise healthy animals sharing an environment with sick animals become like the odors of the sick animals.

The findings suggest that odor cues associated with sickness can cause biological changes in healthy individuals, potentially impacting social contacts and perhaps even patterns of disease spread.

Drs Kimball and Gervasi are scientists at the Monell Center 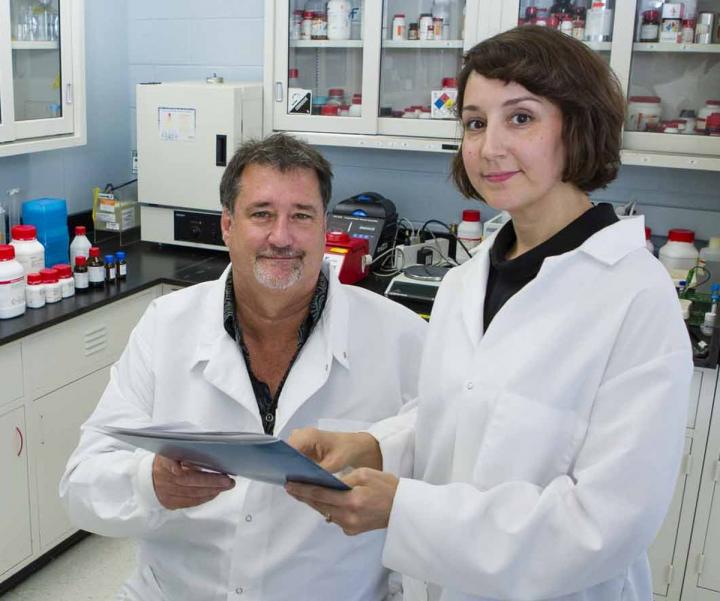 "Exposure to the odors of sick individuals may trigger protective or preparative responses in their social partners to minimize the risk of impending infection," said study lead author Stephanie Gervasi, PhD, a Monell chemical ecologist.

Previous Monell work had demonstrated that inflammation leads to bodily odor changes, suggesting that immune-activated odors might signal the presence of disease risk (or possible contagion) to other members of a species.

In the current study, the researchers injected mice with lipopolysaccharide (LPS), a non-infectious bacterial toxin that causes inflammation, activation of the immune system, and other symptoms associated with sickness. The LPS-injected "sick" animals were then housed in the same cages as healthy animals.

Results from bioassays using "sniffer" mice trained to differentiate between urine odors from LPS-injected and healthy animals indicated that healthy partners of sick animals smelled more like sick, as compared to healthy, animals.

A parallel analysis using statistical predictive modeling of urinary odor compounds identified via analytical chemistry confirmed the behavioral bioassay findings: models were more likely to classify odor compounds from healthy mice as sick rather than healthy when the healthy mice were co-housed with sick animals.

Similar results were obtained when the study was repeated with sick and healthy animals that were physically separated by a perforated partition. The partition allowed odors to circulate, strongly suggesting that the changes in the healthy mice were not the result of physical odor transfer.

The combined findings reveal that body odors of healthy animals can change in the presence of odor-based sickness signals.

"This work shows not only that odors signal disease but that they can have strong effects on individuals that detect them," said Monell behavioral biologist Gary Beauchamp, PhD, one of the paper's senior authors. "This is a remarkable transfer of information via olfaction that specifically alters physiology and could play a role in disease transfer among individuals in many species."

Bruce Kimball, PhD, a research chemist from the USDA National Wildlife Research Center Research (NWRC) stationed at Monell and also a senior author, notes that the study's findings may be particularly relevant to wildlife populations. "This knowledge that healthy animals can emit odors associated with sickness may inform our efforts to use bodily odors to understand how pathogens are transmitted within a population of animals," he said.