The British mainland was formed from the collision of not two, but three ancient continental land masses, according to new research.

Scientists have for centuries believed that England, Wales and Scotland were created by the merger of Avalonia and Laurentia more than 400 million years ago.

However, geologists based at the University of Plymouth now believe that a third land mass - Armorica - was also involved in the process.

The findings are published in Nature Communications and follow an extensive study of mineral properties at exposed rock features across Devon and Cornwall.

They reveal a clear boundary running across the two counties, with areas north of it sharing their geological roots with the rest of England and Wales but everything south being geologically linked to France and mainland Europe.

Among other things, scientists believe the research explains the abundance of tin and tungsten in the far South West of England - metals also found in Brittany and other areas of mainland Europe, but not so evident in the rest of the UK.

This graphic shows how the ancient land masses of Laurentia, Avalonia and Armorica would have collided to create the countries of England, Scotland and Wales. 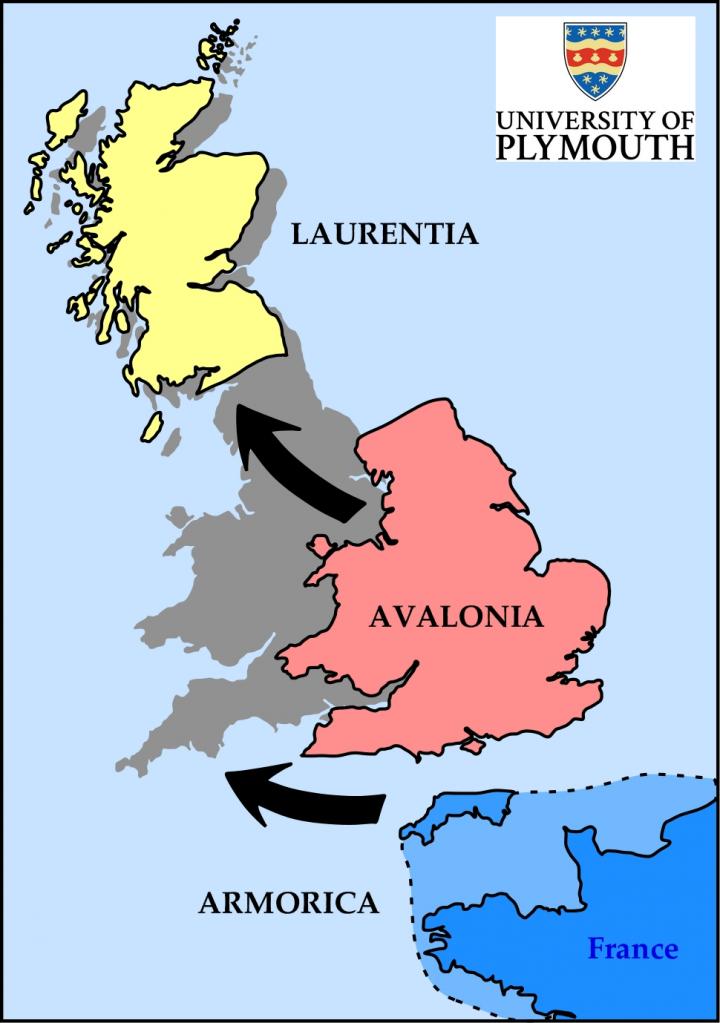 The research's lead author, Lecturer in Igneous Petrology Dr Arjan Dijkstra, said: "This is a completely new way of thinking about how Britain was formed. It has always been presumed that the border of Avalonia and Armorica was beneath what would seem to be the natural boundary of the English Channel. But our findings suggest that although there is no physical line on the surface, there is a clear geological boundary which separates Cornwall and south Devon from the rest of the UK."

For the research, Dr Dijkstra and Masters student Callum Hatch (now working at the Natural History Museum) visited 22 sites in Devon and Cornwall that were left exposed following geological events, such as underground volcanic eruptions. These took place around 300 million years ago and brought magma from depths of 100 km to the Earth's surface.

They took rock samples from each site, subjecting them to detailed chemical analysis in the lab using X-ray fluorescence (XRF) spectrometry.

The samples were also then dissolved in acid in order to conduct a more intensive isotopic analysis, with scientists examining the levels of two elements - strontium and neodymium - to understand the full history of the rocks.

These findings were then compared with previous studies elsewhere in the UK and mainland Europe, with the results showing the clear boundary running from the Exe estuary in the East to Camelford in the west.

"We always knew that around 10,000 years ago you would have been able to walk from England to France," Dr Dijkstra added. "But our findings show that millions of years before that, the bonds between the two countries would have been even stronger. It explains the immense mineral wealth of South West England, which had previously been something of a mystery, and provides a fascinating new insight into the geological history of the UK."