Einstein's general theory of relativity has helped an international team of researchers measure the lumpiness of dark matter in our Universe today by analyzing images of 10 million distant galaxies, and further use it to understand dark energy.

Left panel: The 3-dimensional dark matter map of the universe inferred from one of the six HSC observation areas is shown in the background with various shades of blue (brighter areas have more dark matter). The map was inferred from the distortions of shapes of galaxies in the HSC data which are indicated by white sticks. The stick lengths represent the amount of distortion and the angle of the stick corresponds to the direction of the distortion. Right panel: The measurements are enabled by the light from distant galaxies that travels through the universe and gets deflected by matter at different epochs in the universe, before reaching the Subaru telescope. 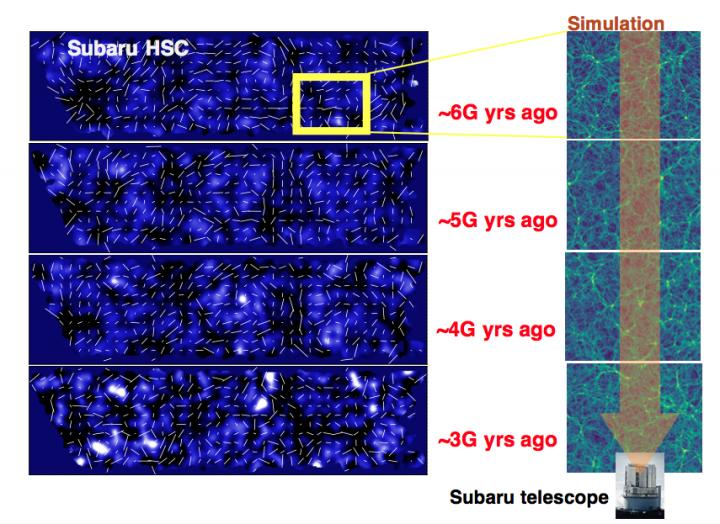 Studies to measure the amount of cosmic structure have been carried out in the past, especially when the Universe was very young, such as the European Space Agency Planck satellite. Dark energy can affect the growth rate of these structures at a later time, closer to today. Scientists are just starting to measure the growth of these structures by studying dark matter in the later Universe and thus using it to learn about dark energy.

"Fluctuations measured by Planck are like a precise arrow shot from the early Universe, and we have measured where the arrow landed with Subaru Hyper Suprime-Cam," said paper author and Inter-University Center for Astronomy & Astrophysics Associate Professor Surhud More.

The Hyper Suprime-Cam Survey, which uses the 820 mega-pixel Hyper Suprime-Cam camera attached to the 8.2 meter Subaru telescope at the summit of Maunakea, allowed researchers to study galaxies billions of light years away. These galaxies existed billions of years ago but their light only reached Earth today.

The cosmological constraints on the clumpiness of the Universe today (S8) predicted using observations at different times in the Universe. The HSC measurement of the clumpiness of the Universe is shown with the red symbol and are among the farthest measurements using weak gravitational lensing. These should be compared with the Planck results obtained from observations of the cosmic microwave background in the very early Universe and other contemporary weak lensing experiments KiDS and DES. 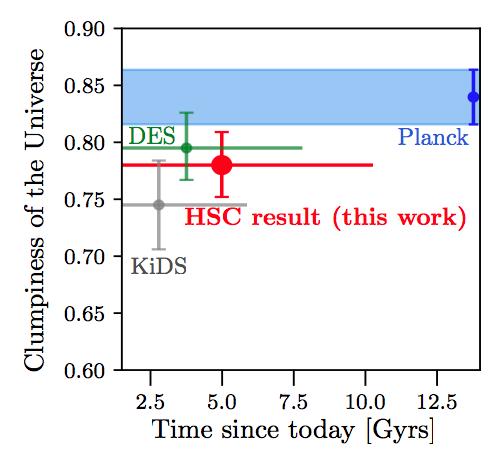 Albert Einstein predicted gravitational lensing in his theory of general relativity, where gravity can bend the path of light, making far away galaxies appear distorted to observers on Earth.

Since 2014, researchers from Japan, Taiwan, and the US, led by Kavli Institute for the Physics and Mathematics of the Universe (Kavli IPMU) Project Assistant Professor Chiaki Hikage, studied these minute distortions caused by gravitational lensing to reconstruct where matter is distributed in the Universe. Now the team can see how fluctuations of dark matter across the sky have changed over billions of years, and how dark energy has influenced this growth of structure.

"I had a long-cherished hope to undertake high precision cosmology research such as that enabled by WMAP and Planck. I am very excited to share the measurements of the growth of dark matter structures in the Universe with great accuracy using Subaru HSC data," said Hikage.

The weak lensing surveys such as HSC prefer a slightly less clumpy Universe than that predicted by Planck. The pictures show the slight but noticeable difference as expected from large computer simulations. Is this difference a statistical fluctuation? Astronomers all around the world continue to collect more and more data to answer this question. 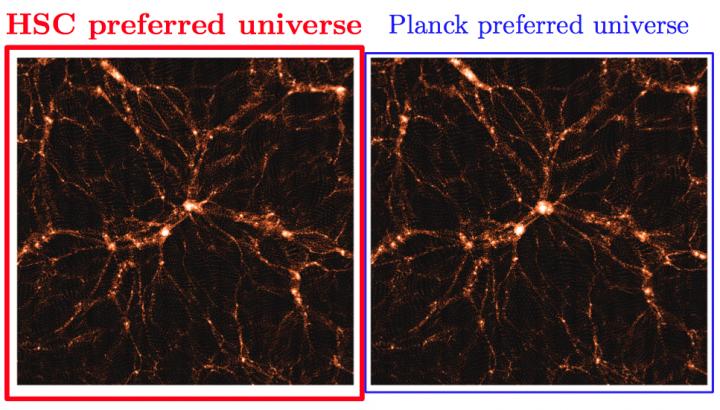 However, Hikage and his team knew their excitement could potentially bias their results, especially if they looked to confirm results from previous studies during their analysis. To ensure the results were sound, they performed a blind analysis, a technique well known in medical trials where no one knows which patients have been given a new treatment. Two fake data catalogs were created, and the true identity of each catalog was locked away in a box. Following an unveiling event on June 26, for the first time researchers found their analysis had revealed the Hyper Suprime-Cam Survey was indeed consistent with past gravitational lensing studies, but their result suggested cosmic structures might be evolving a tad bit slower in the Universe today than that predicted by the Planck satellite in the concordance cosmological model.

This could be a statistical fluctuation due to a small data set, or it could indicate a breakdown in the standard model of the Universe.

Luckily, there is more data for the team to analyze in the future. This result uses only 11 per cent of the full survey, because the Hyper Suprime-Cam is still taking images, and is scheduled to finish around 2020.

"This is just a first step, and the completed data of Hyper Suprime-Cam survey promises to advance our understanding of dark matter and dark energy," said Kavli IPMU Principal Investigator and paper author Masahiro Takada.

The team uploaded their paper detailing these results to the preprint server (https://arxiv.org) on September 26, and will submit their findings to the Publication of Astronomical Society of Japan (PASJ) for peer review.


Contacts and sources:
Kavli Institute for the Physics and Mathematics of the Universe (Kavli IPMU)