As a cabbage caterpillar eats through leaves of the mustard plant Arabidopsis, a wave of calcium crossing the plant, revealed by fluorescent light, triggers defense responses in distant leaves.

In one video, you can see a hungry caterpillar, first working around a leaf’s edges, approaching the base of the leaf and, with one last bite, severing it from the rest of the plant. Within seconds, a blaze of fluorescent light washes over the other leaves, a signal that they should prepare for future attacks by the caterpillar or its kin. 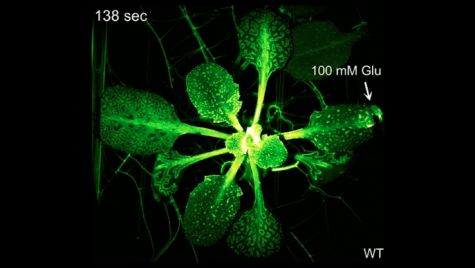 That fluorescent light tracks calcium as it zips across the plant’s tissues, providing an electrical and chemical signal of a threat. In more than a dozen videos like this, University of Wisconsin–Madison Professor of Botany Simon Gilroy and his lab reveal how glutamate — an abundant neurotransmitter in animals — activates this wave of calcium when the plant is wounded. The videos provide the best look yet at the communication systems within plants that are normally hidden from view. 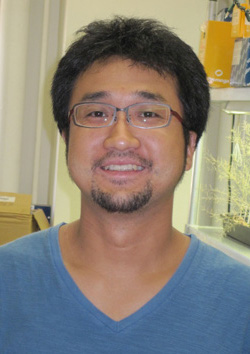 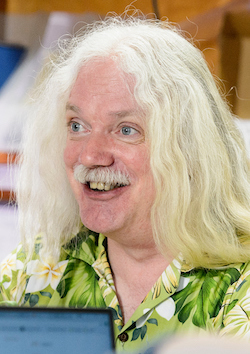 The research is published Sept. 14 in the journal Science. Masatsugu Toyota led the work as a postdoctoral researcher in Gilroy’s lab. Gilroy and Toyota, now at Saitama University in Japan, collaborated with researchers from the Japan Science and Technology Agency, Michigan State University and the University of Missouri.

“We know there’s this systemic signaling system, and if you wound in one place the rest of the plant triggers its defense responses,” says Gilroy. “But we didn’t know what was behind this system.”

“We do know that if you wound a leaf, you get an electrical charge, and you get a propagation that moves across the plant,” Gilroy adds. What triggered that electric charge, and how it moved throughout the plant, were unknown.

Supplying glutamate directly to the tip of one leaf creates a strong wave of calcium across the entire plant, visualized by fluorescent light.

But calcium was one candidate. Ubiquitous in cells, calcium often acts as a signal about a changing environment. And because calcium carries a charge, it can also produce an electrical signal. But calcium is ephemeral, spiking and dipping in concentration quickly. The researchers needed a way to see the calcium in real time.

So Toyota developed plants that showed calcium in a whole new light. The plants produce a protein that only fluoresces around calcium, letting the researchers track its presence and concentration. Then came caterpillar bites, scissor cuts and crushing wounds.

In response to each kind of damage, videos show the plants lighting up as calcium flows from the site of damage to other leaves. The signal moved quickly, about one millimeter per second. That’s just a fraction of the speed of animal nerve impulses, but it’s lightning fast in the plant world — quick enough to spread out to other leaves in just a couple minutes. It took just a few more minutes for defense-related hormone levels to spike in distant leaves. These defense hormones help prepare the plant for future threats by, for example, increasing the levels of noxious chemicals to ward off predators.


A closeup of a non-wounded leaf shows the flow of calcium after a distant leaf is wounded.

Previous research by Swiss scientist Ted Farmer has demonstrated that defense-related electrical signals depended on receptors for glutamate, an amino acid that is a major neurotransmitter in animals and also common in plants. Farmer showed that mutant plants missing glutamate receptors also lost their electrical responses to threats. So Toyota and Gilroy looked at the flow of calcium during wounding in these mutant plants.

Where normal plants blaze brightly with fluorescent calcium waves during wounding, videos show the mutant plants barely sputtering marginal flashes of light. These results suggest that glutamate spilling out from wound sites triggers the burst in calcium that spreads across the plant.


Visualized with a fluorescent reporter, calcium is seen flowing through the plant’s vasculature in response to damaging a distant leaf.

The study connects decades of research that has revealed how plants, often seen as inert, dynamically respond to threats by preparing distant tissues to deal with future attacks. Glutamate leads to calcium leads to defense hormones and altered growth and biochemistry, all without a nervous system.

Gilroy says that in addition to helping tie all these pieces together, the videos help him visualize the flurry of activity within plants that’s normally invisible.

“Without the imaging and seeing it all play out in front of you, it never really got driven home — man, this stuff is fast!” he says.