Unstoppable Monster in the Early Universe

Astronomers obtained the most detailed anatomy chart of a monster galaxy located 12.4 billion light-years away. Using the Atacama Large Millimeter/submillimeter Array (ALMA), the team revealed that the molecular clouds in the galaxy are highly unstable, which leads to runaway star formation. Monster galaxies are thought to be the ancestors of the huge elliptical galaxies in today's Universe, therefore these findings pave the way to understand the formation and evolution of such galaxies.

"One of the best parts of ALMA observations is to see the far-away galaxies with unprecedented resolution," says Ken-ichi Tadaki, a postdoctoral researcher at the Japan Society for the Promotion of Science and the National Astronomical Observatory of Japan, the lead author of the research paper published in the journal Nature.

Monster galaxies, or starburst galaxies, form stars at a startling pace; 1000 times higher than the star formation in our Galaxy. But why are they so active? To tackle this problem, researchers need to know the environment around the stellar nurseries. Drawing detailed maps of molecular clouds is an important step to scout a cosmic monster.

This galaxy is located 12.4 billion light-years away and is forming stars 1000 times more rapidly than our Milky Way Galaxy. ALMA observations revealed dense gas concentrations in the disk, and intense star formation in those concentrations. 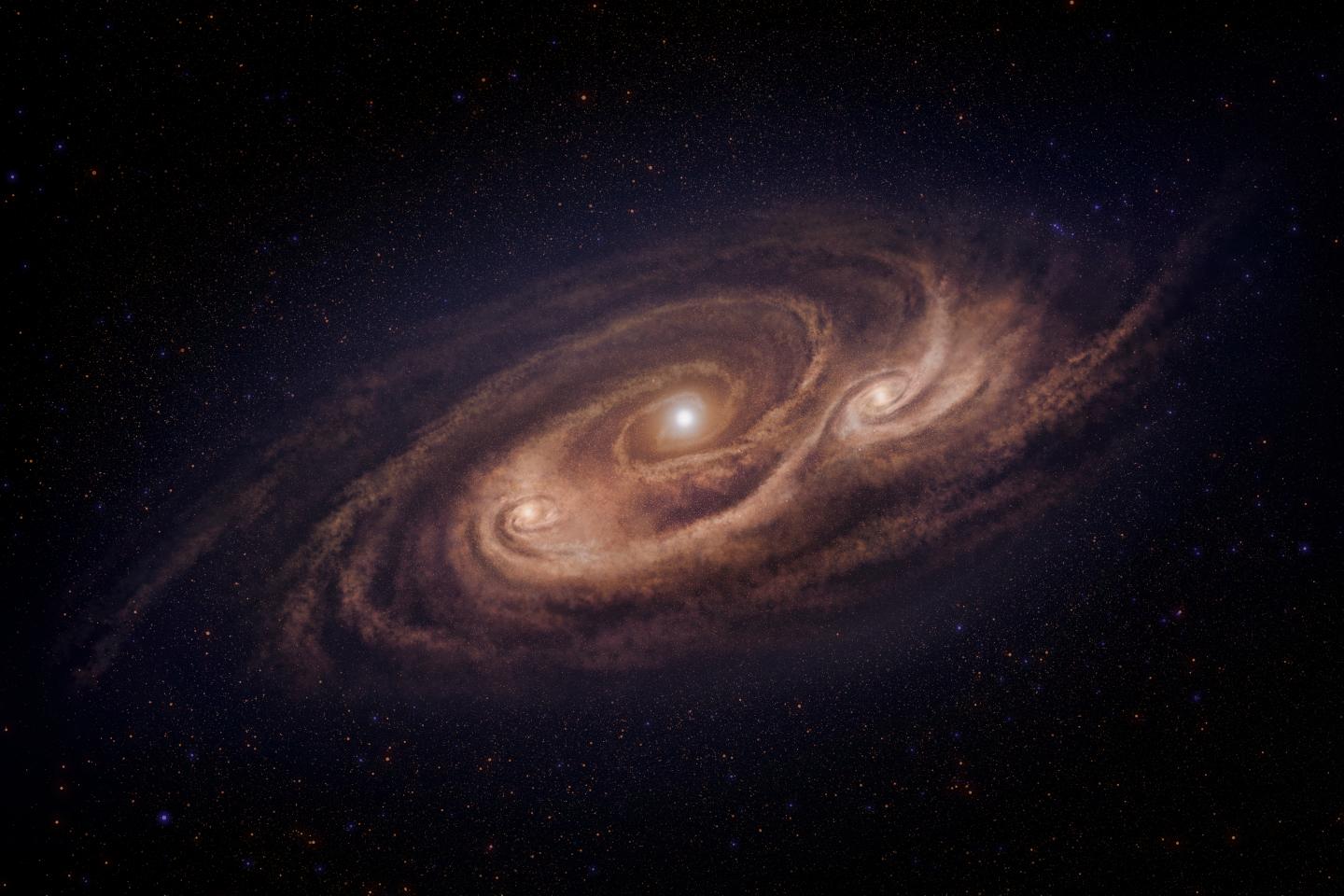 Tadaki and the team targeted a chimerical galaxy COSMOS-AzTEC-1. This galaxy was first discovered with the James Clerk Maxwell Telescope in Hawai`i, and later the Large Millimeter Telescope (LMT) in Mexico found an enormous amount of carbon monoxide gas in the galaxy and revealed its hidden starburst. The LMT observations also measured the distance to the galaxy, and found that it is 12.4 billion light-years (Note).

Researchers have found that COSMOS-AzTEC-1 is rich with the ingredients of stars, but it was still difficult to figure out the nature of the cosmic gas in the galaxy. The team utilized the high resolution and high sensitivity of ALMA to observe this monster galaxy and obtain a detailed map of the distribution and the motion of the gas. Thanks to the most extended ALMA antenna configuration of 16 km, this is the highest resolution molecular gas map of a distant monster galaxy ever made.

"We found that there are two distinct large clouds several thousand light-years away from the center," explains Tadaki. "In most distant starburst galaxies, stars are actively formed in the center. So it is surprising to find off-center clouds."

The astronomers further investigated the nature of the gas in COSMOS-AzTEC-1 and found that the clouds throughout the galaxy are very unstable, which is unusual. In a normal situation, the inward gravity and outward pressure are balanced in the clouds. Once gravity overcomes pressure, the gas cloud collapses and forms stars at a rapid pace. Then, stars and supernova explosions at the end of the stellar life cycle blast out gases, which increase the outward pressure. As a result, the gravity and pressure reach a balanced state and star formation continues at a moderate pace. In this way star formation in galaxies is self-regulating. But, in COSMOS-AzTEC-1, the pressure is far weaker than the gravity and hard to balance. Therefore this galaxy shows runaway star formation and has morphed into an unstoppable monster galaxy.


Monster galaxy COSMOS-AzTEC-1 observed with ALMA. ALMA revealed the distribution of molecular gas (left) and dust particles (right). In addition to the dense cloud in the center, the research team found two dense clouds several thousand light-years away from the center. These dense clouds are dynamically unstable and thought to be the sites of intense star formation. 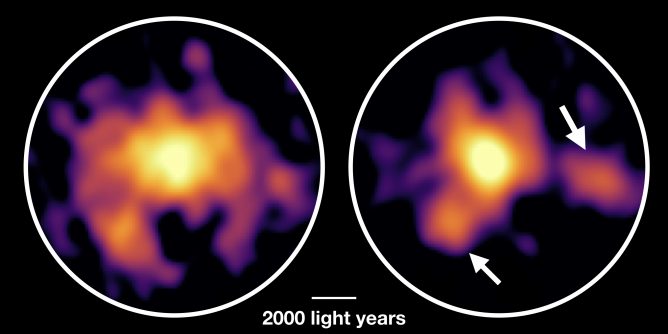 
The team estimated that the gas in COSMOS-AzTEC-1 will be completely consumed in 100 million years, which is 10 times faster than in other star forming galaxies.

But why is the gas in COSMOS-AzTEC-1 so unstable? Researchers do not have a definitive answer yet, but galaxy merger is a possible cause. Galaxy collision may have efficiently transported the gas into a small area and ignited intense star formation.

"At this moment, we have no evidence of merger in this galaxy. By observing other similar galaxies with ALMA, we want to unveil the relation between galaxy mergers and monster galaxies," summarizes Tadaki.