Most animals have a keen sense of smell, which assists them in everyday tasks. Now, a new study led by researchers at NYU School of Medicine sheds light on exactly how animals follow smells.

Published online in the journal eLife on August 21, the study measured the behavior of fruit flies as they navigated through wind tunnels in response to odor plumes from apple cider vinegar blowing past.

The rainbow-colored path of flies navigating as they detect (pink) or lose track of a scent (blue), with a laser projection of a varying odor plume from vinegar appearing as a gray cloud. 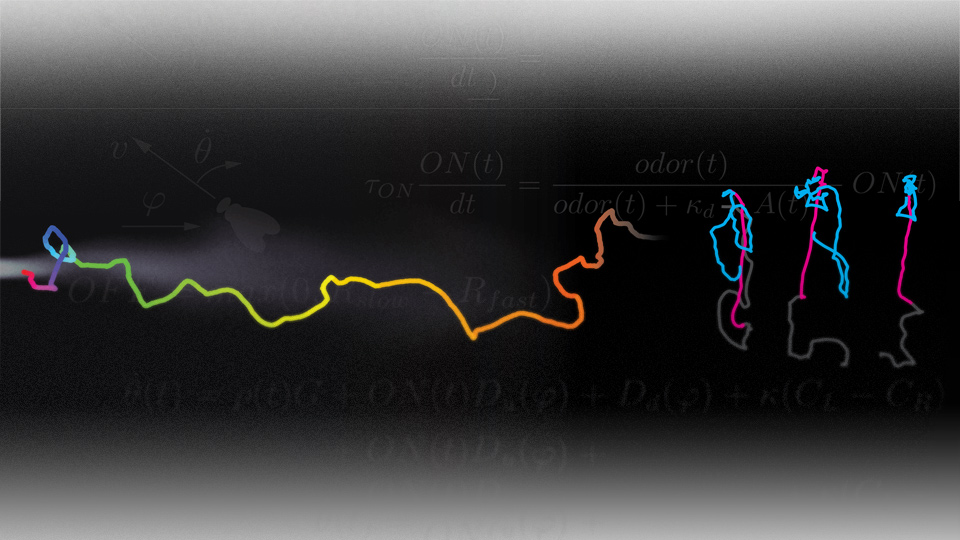 
“Our study begins to dissect the brain functions that enable flies to hunt for food by following odors in the real world,” says senior study author Katherine Nagel, PhD, an assistant professor in the Department of Neuroscience and Physiology at NYU Langone Health. “Such insights could have many future applications, from the design of robots that find lost hikers like search dogs, to vehicles that steer themselves based on the combined sensing of odor concentration and wind or water currents.”

The new study is the first to come under the auspices of a grant received by Dr. Nagel as part of the National Institute of Health’s Brain Research through Advancing Innovative Neurotechnologies (BRAIN) Initiative®. Announced by President Obama in 2013, the BRAIN Initiative® seeks to develop tools to better understand the organ’s functions, as well as the mechanisms behind major neurological diseases.
Vinegar Plumes

Movement toward attractive odors is so basic to life that it occurs in organisms without brains, such as bacteria and plankton, say the study authors. Following odors in turbulent air or water is often difficult, however, because odors travel in plumes, which meander downwind or downstream and break up.

Fruit flies make a good model for studying detection of odors, say the authors, because the tools available to dissect brain circuits in flies are exquisite and because these animals likely share circuit mechanisms with humans thanks to evolution. In the current study, experiments showed that flies faced the wind when they sensed an odor on it, used their antennae to determine its direction, and then ran faster upwind toward the odor.

When they lost track of a smell, they danced around and cast about for where they had last smelled it, their actions for the moment appearing to be driven solely by the loss of odor, rather than wind direction. Based on these recorded movements, the researchers then built a computer model capable of detecting odor sources as well as the flies could detect them, and of moving toward them in similar trajectories. The results suggest that fly brains mix independent sensing of air flow, differences in odor over time, and differences in odor across their antennae to hunt for an odor source.

The researchers say their model captured the process by which sensory signals, like wind felt on antennae and the timing of odor concentration changes, are transformed by brain circuits into changes in forward velocity (walking speed) and angular velocity (turning degree).

“Such sensorimotor transformations in every case begin with a sight, sound, or smell and end with muscle movements,” says first study author Efrén Álvarez-Salvado, PhD, a postdoctoral researcher in Dr. Nagel’s lab. “Our work provides the framework for dissecting the neural circuits that generate olfactory navigation using genetic tools.”

Along with Dr. Nagel and Dr. Álvarez-Salvado, study authors from the Neuroscience Institute at NYU Langone Health were Angela Licata, Benjamin King, and Nicholas Stavropoulos. Additional authors were Erin Connor, Margaret McHugh, and John Crimaldi of the Department of Civil, Environmental, and Architectural Engineering at the University of Colorado Boulder, who designed the turbulent wind tunnels used in the study. Also, an author was Jonathan Victor of the Institute for Computational Biomedicine at Weill Cornell Medical College.