Solar Eruptions May Not Have Slinky-like Shapes After Al

As the saying goes, everything old is new again. While the common phrase often refers to fashion, design, or technology, scientists at the University of New Hampshire have found there is some truth to this mantra even when it comes to research. Revisiting some older data, the researchers discovered new information about the shape of coronal mass ejections (CMEs) - large-scale eruptions of plasma and magnetic field from the sun – that could one day help protect satellites in space as well as the electrical grid on Earth.

“Since the late 1970s, coronal mass ejections have been assumed to resemble a large Slinky – one of those spring toys - with both ends anchored at the sun, even when they reach Earth about one to three days after they erupt,” said Noe Lugaz, research associate professor in the UNH Space Science Center. “But our research suggests their shapes are possibly different.”

An image from NASA Solar Dynamics Observatory (SDO) satellite that shows an example of a commonly believed Slinky-like shaped coronal mass ejection (CME) -- in this case a long filament of solar material hovering in the sun's atmosphere, or corona. This CME traveled 900 miles per second connecting with Earth's magnetic environment and causing aurora to appear four days later on Sept. 3, 2012. 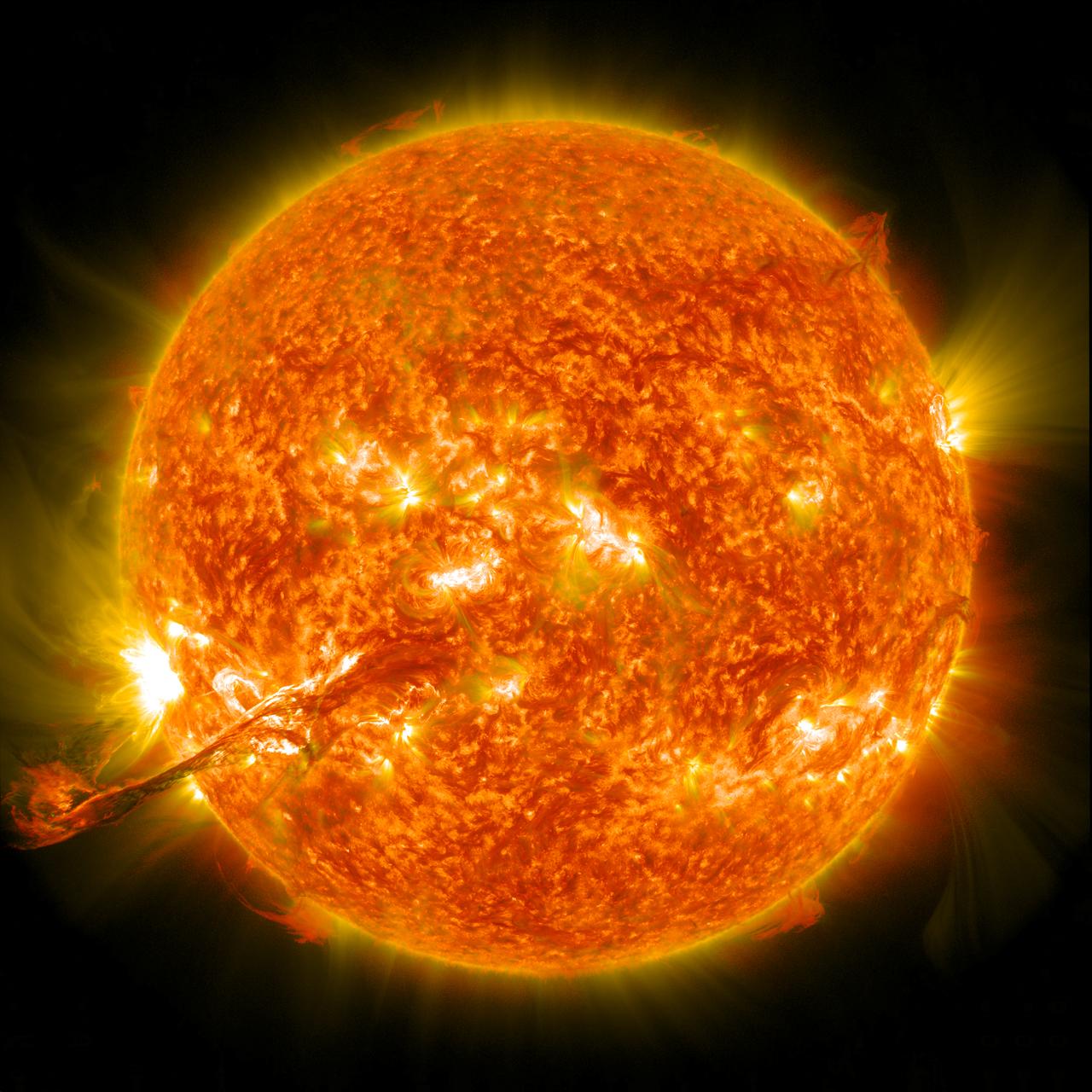 Knowing the shape and size of CMEs is important because it can help better forecast when and how they will impact Earth. While they are one of the main sources for creating beautiful and intense auroras, like the Northern and Southern Lights, they can also damage satellites, disrupt radio communications and wreak havoc on the electrical transmission system causing massive and long-lasting power outages. Right now, only single point measurements exist for CMEs making it hard for scientists to judge their shapes. But these measurements have been helpful to space forecasters, allowing them a 30 to 60 minute warning before impact. The goal is to lengthen that notice time to hours - ideally 24 hours - to make more informed decisions on whether to power down satellites or the grid.

In their study, published in Astrophysical Journal Letters, the researchers took a closer look at data from two NASA spacecraft, Wind and ACE, typically orbiting upstream of Earth. They analyzed the data of 21 CMEs over a two-year period between 2000 and 2002 when Wind had separated from ACE. Wind had only separated one percent of one astronomical unit (AU), which is the distance from the sun to the Earth (93,000,000 miles). So, instead of now being in front of Earth, with ACE, Wind was now perpendicular to the Sun-Earth line, or on the side.

“Because they are usually so close to one another, very few people compare the data from both Wind and ACE,” said Lugaz. “But 15 years ago, they were apart and in the right place for us to go back and notice the difference in measurements, and the differences became larger with increasing separations, making us question the Slinky shape.”

The data points toward a few other shape possibilities: CMEs are not simple Slinky shapes (they might be deformed ones or something else entirely), or CMEs are Slinky-shaped but on a much smaller scale (roughly four times smaller) than previously thought.

While the researchers say more studies are needed, Lugaz says this information could be important for future space weather forecasting. With other missions being considered by NASA and NOAA, the researchers say this study shows that future spacecraft may first need to investigate how close to the Sun-Earth line they have to remain to make helpful and more advanced forecast predictions.

This research was supported by NASA and the National Science Foundation.

Contacts and sources:
Robbin Ray
The University of New Hampshire