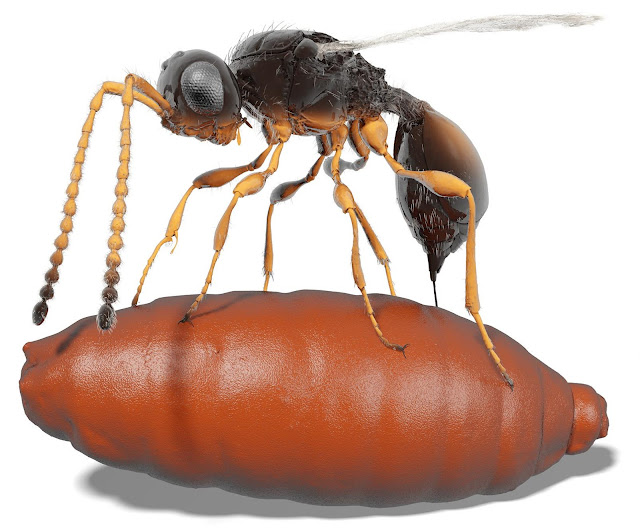 They found 55 cases of parasitation and described four extinct wasp species that were unknown until now. Their findings are reported in Nature Communications (Open Access, DOI: 10.1038/s41467-018-05654-y).

The results of the project provide major information on the evolution of parasitism. Parasitism is widely spread and impacts ecosystems essentially. Today, about 50% of all animal species are deemed parasites. The relation between the diversity of species and parasitism is particularly obvious in the insect order Hymenoptera, to which wasps belong. Within the KIT-coordinated project, researchers identified four so far unknown extinct wasp species that were endoparasites, i.e. parasites developing inside their host, from the Paleogene that spanned the period from about 66 million years ago to about 23 million years ago.

X-ray microtomography of 1510 fossil fly pupae from the Paleogene revealed parasitation by four species of parasitoid wasps. The video shows a surface reconstruction of a female parasitoid, which developed inside its host about 30 million years ago. A surface reconstruction based on the tomography data is rearranged and artificially colored in order a to provide a true-to-life impression of the specimen, which is shown laying an egg into a puparium. The species was named Xenomorphia ressurecta, referring to the Xenomorph from the “Alien” movies
Credit: Insect Science 3D

Each of the four parasitic wasp species had its own strategy for adaptation to the host. The most frequently observed species of the four was named “Xenomorphia resurrecta” by the scientists. The genus “Xenomorphia” is named after the creature from the “Alien” science fiction series, which is known as Xenomorph and also develops endoparasitically. The species’ name “resurrecta” refers to the “digital resurrection” of the species, says project coordinator Dr. Thomas van de Kamp from KIT’s Laboratory for Applications of Synchrotron Radiation (LAS). “Our project proves that it is worthwhile to study old collections afresh with latest technology.”

The fossils the scientists studied, more than 1,500 mineralized fly pupae, belong to collections of the Natural History Museum of Basel and the Naturhistoriska riksmuseet of Stockholm. In the late 19th century, they were collected in phosphorite mines in the region of Quercy, France. In 1944, Swiss entomologist Eduard Handschin described the fossils in detail and emphasized the value of the externally inconspicuous pieces of merely 3 mm in length. Still, they have fallen into oblivion for more than 70 years. At that time, Handschin had suspected the contours of a parasitic wasp in a thin section of a probably 34 to 40-million-year-old fly pupa, but could not prove it. This was the point of departure of the current project, the results of which are published in Nature Communications under the heading “Parasitoid biology preserved in mineralized fossils.”

Ultrafast X-ray imaging, largely developed and refined by KIT, enabled new access to the fossils. The researchers studied the samples with synchrotron X-ray microtomography. In optically dense samples, inner structures can only be observed non-invasively and in three dimensions with X-rays. Synchrotron radiation sources, a type of particle accelerators, produce electromagnetic radiation with a much broader spectrum and at much higher intensity than conventional sources. The measurements for the project were made at the UFO high-speed tomography station of the KIT synchrotron.

“Sample throughput is high. Imaging and evaluation of the data take place in a partly automated manner, which makes such measurements feasible,” says van de Kamp. Two years ago, the team already imaged fossil beetles found in Quercy and made their inner anatomy visible. At the UFO station, however, not only fossils are scanned. The setup is equally suited for other projects, in which a large number of pieces have to be imaged. Hence, UFO is of interest to a variety of disciplines, among others to materials science.

Following imaging of the mineralized fly pupae, the parasitic wasps from the Paleogene were reconstructed digitally. Thus, the project did not only require comprehensive know-how relating to synchrotron X-ray microtomography, but also detailed biological and paleontological knowledge. Project coordinator Dr. Thomas van de Kamp of KIT’s LAS is a biologist and has specialized in insect morphology and digital imaging of biological samples. Also, he linked physics to biology.

Other main authors are paleontologist Dr. Achim H. Schwermann of the LWL-Museum of Natural History in Münster, expert for fossilization processes, and biologist Dr. Lars Krogmann from the State Museum of Natural History Stuttgart, specialist for parasitic wasps, who systematically classified the discovered parasites and wrote the formal species descriptions. Overall, 18 scientists – biologists, paleontologists, physicists, computer scientists, and mathematicians – from several universities and museums participated in the interdisciplinary project, of these, eight researchers of KIT. Apart from the institutions mentioned, KIT’s Institute for Photon Science and Synchrotron Radiation (IPS) and Institute for Data Processing and Electronics (IPE) as well as institutions of the universities of Heidelberg and Bonn were involved.

The data sets with the discovered parasites are available at http://www.fossils.kit.edu
Contacts and sources:
Karlsruhe Institute of Technology