Maple trees are best known for their maple syrup and lovely fall foliage. But it turns out that the beauty of those leaves could be skin-deep -- and that's a good thing. Today, scientists report that an extract from the leaves may prevent wrinkles.

The scientists had previously studied the chemistry and health benefits of sap and syrup obtained from sugar maple and red maple trees. Historical records suggested that other parts of the trees could also be useful, according to Navindra P. Seeram, Ph.D., the project's principal investigator. "Native Americans used leaves from red maple trees in their traditional system of medicine," he notes, "so why should we ignore the leaves?"

Skin elasticity is maintained by proteins such as elastin. Wrinkles form when the enzyme elastase breaks down elastin in the skin as part of the aging process. "We wanted to see whether leaf extracts from red maple trees could block the activity of elastase," says Hang Ma, Ph.D., who is presenting the work at the meeting and is a research associate in Seeram's lab.

The researchers, who are at the University of Rhode Island, zeroed in on phenolic compounds in the leaves known as glucitol-core-containing gallotannins (GCGs) and examined each compound's ability to inhibit elastase activity in a test tube. The scientists also conducted computational studies to examine how the GCGs interact with elastase to block its activity, and how the molecules' structures affect that blocking ability. GCGs containing multiple galloyl groups (a type of phenolic group) were more effective than those with a single galloyl group. But these compounds can do more than interfere with elastase. In prior work, Seeram's group showed that these same GCGs might be able to protect skin from inflammation and lighten dark spots, such as unwanted freckles or age spots.

Extracts from summer or fall red maple leaves are formulated into a powder that could be incorporated in skincare products to prevent wrinkles. 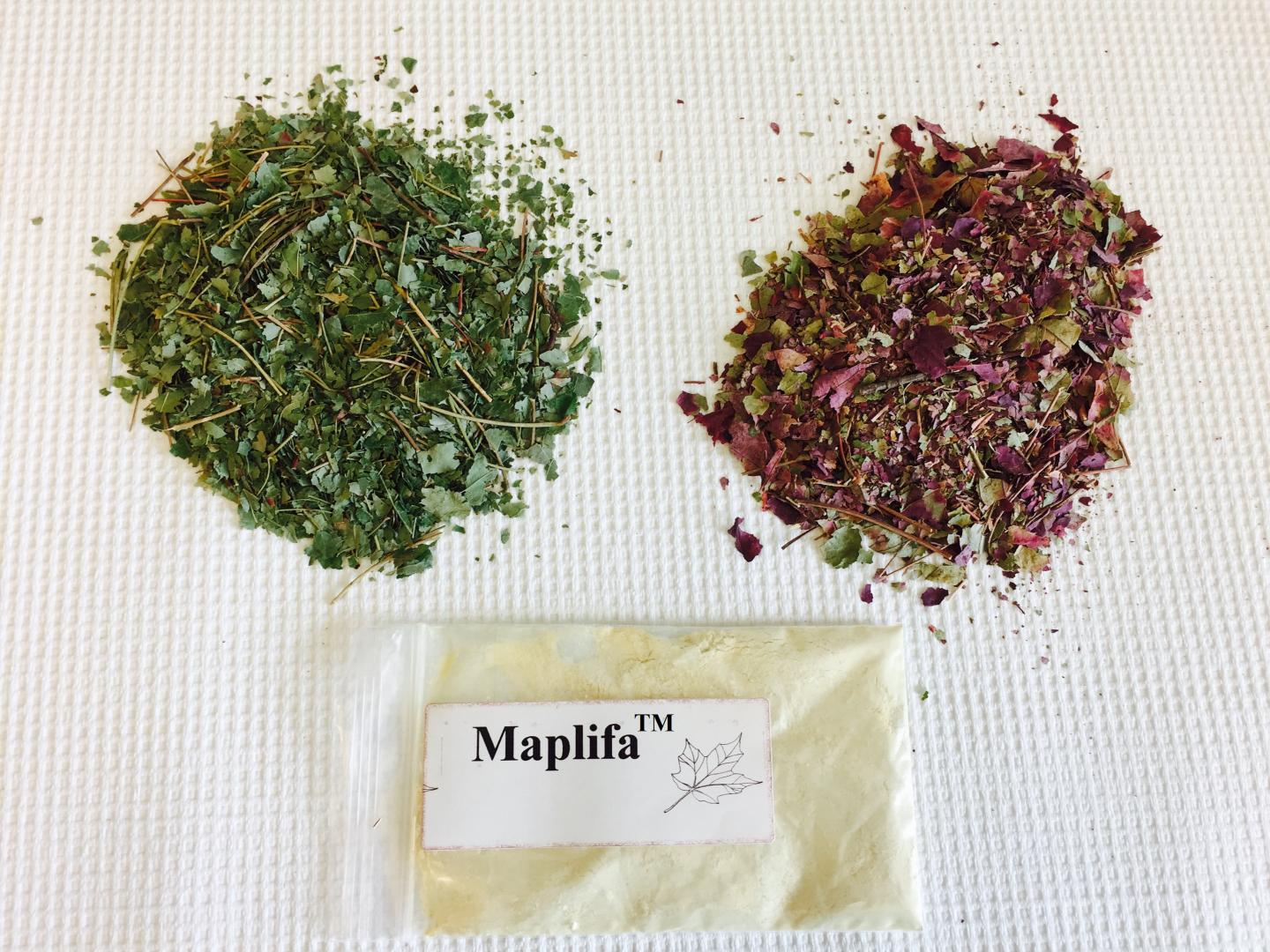 Seeram and Ma plan to do further testing. "You could imagine that these extracts might tighten up human skin like a plant-based Botox®, though they would be a topical application, not an injected toxin," Seeram says. And the fact that the extracts are derived from trees would be appreciated by consumers who are looking for natural, plant-based ingredients in their skincare products.

The researchers have taken steps to get the extracts into products, having developed a proprietary patent-pending formulation containing GCGs from summer and fall maple leaves and maple sap, which they named MaplifaTM (pronounced "mape-LEAF-uh" to reflect its origin). They have licensed it to botanical extracts supplier Verdure Sciences based in Indiana and are hoping to eventually find a market for the formulation in the cosmetics sector or even in dietary supplements.

If these products come to fruition, the team's findings could benefit the local economy. "Many botanical ingredients traditionally come from China, India and the Mediterranean, but the sugar maple and the red maple only grow in eastern North America," Seeram says. Farmers in the region, who currently only harvest sap from the maple trees, could tap the leaves as a value-added product for an additional source of income. Even better, the process would be sustainable because leaves could be collected during normal pruning or when they fall from the trees in autumn.

The researchers presented their results at the 256th National Meeting & Exposition of the American Chemical Society (ACS). ACS, the world's largest scientific society, is holding the meeting there through Thursday. It features more than 10,000 presentations on a wide range of science topics.