ith an equator diameter of around 143,000 kilometers, Jupiter is the largest planet in the solar system and has 300 times the mass of the Earth. The formation mechanism of giant planets like Jupiter has been a hotly debated topic for several decades. Now, astrophysicists of the Swiss National Centre of Competence in Research (NCCR) PlanetS of the Universities of Bern and Zürich and ETH Zürich have joined forces to explain previous puzzles about how Jupiter was formed and new measurements. The research results were published in the magazine Nature Astronomy.

"We could show that Jupiter grew in different, distinct phases," explains Julia Venturini, postdoc at the University of Zürich. "Especially interesting is that it is not the same kind of bodies that bring mass and energy," adds Yann Alibert, Science Officer of PlanetS and first author of the paper. First, the planetary embryo rapidly accreted small, centimeter-sized pebbles and quickly built a core during the initial one million years. The following two million years were dominated by slower accretion of larger, kilometer-sized rocks called planetesimals. They hit the growing planet with great energy, releasing heat.

This is Jupiter's southern hemisphere photographed by NASA's Juno spacecraft. 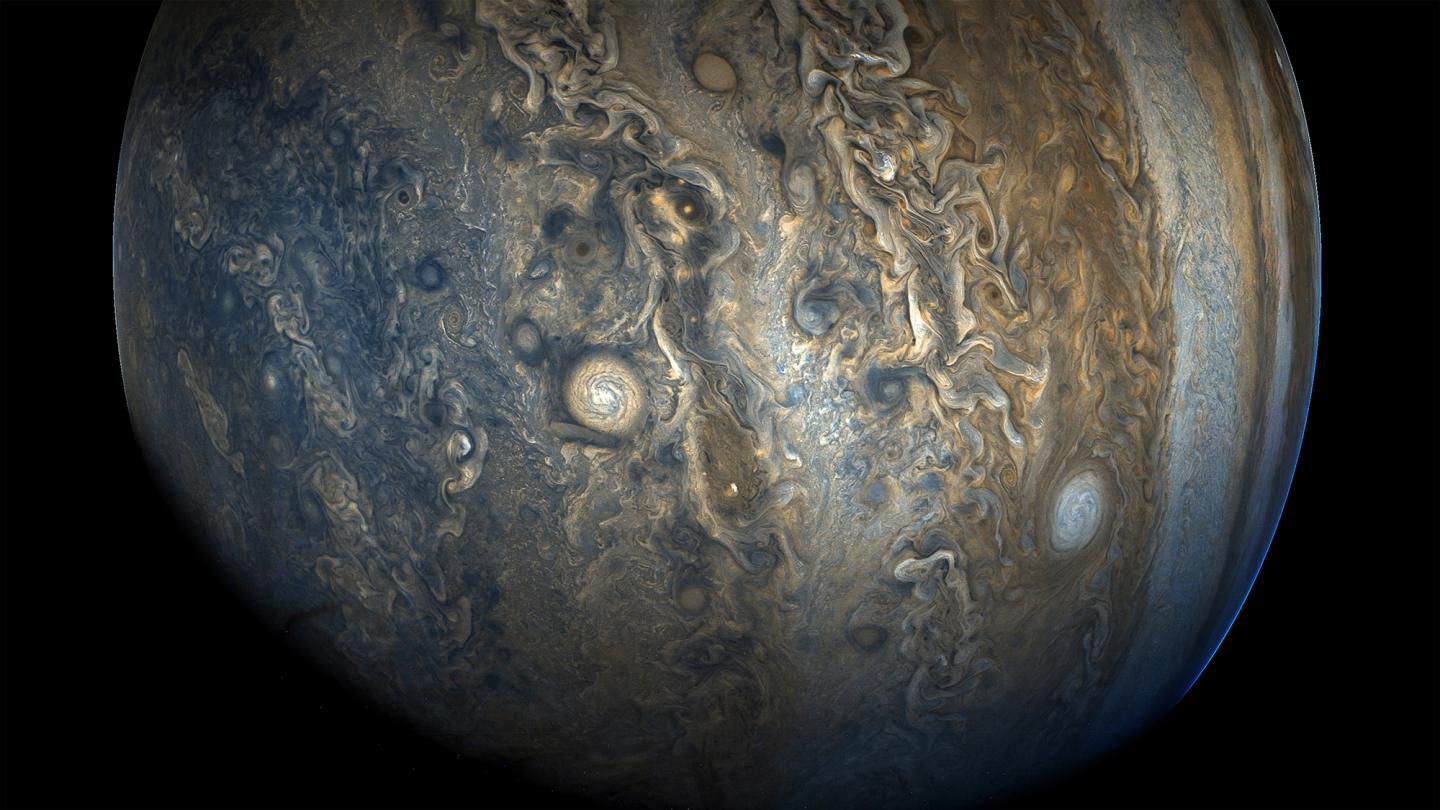 "During the first stage the pebbles brought the mass," Yann Alibert explains: "In the second phase, the planetesimals also added a bit of mass, but what is more important, they brought energy." After three million years, Jupiter had grown to a body of 50 Earth masses. Then, the third formation phase started dominated by gas runaway accretion leading to today's gas giant with more than 300 Earth masses.

The new model for Jupiter's birth matches the meteorite data that were presented at a conference in the US last year. At first, Julia Venturini and Yann Alibert were puzzled when they listened to the results. Measurements of the composition of meteorites showed that in the primordial times of the solar system the solar nebula was divided into two regions during two million years. It could therefore be concluded that Jupiter acted as a kind of a barrier when it grew from 20 to 50 Earth masses. During this period, the forming planet must have perturbed the dust disk, creating an over-density that trapped the pebbles outside of its orbit. Therefore, material from outward regions could not mix with material of the inner ones until the planet reached enough mass to perturb and scatter rocks inwards. 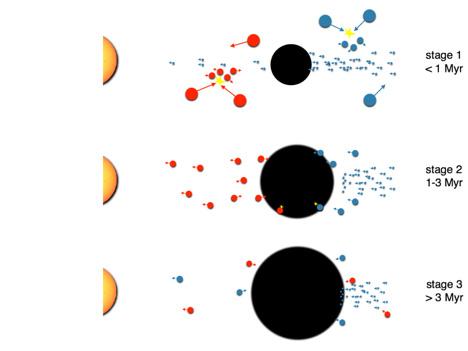 
"How could it have taken two million years for Jupiter to grow from 20 to 50 Earth masses?" asked Julia Venturini. "That seemed much too long," she explains: "That was the triggering question that motivated our study." A discussion by email started among NCCR PlanetS researchers of the Universities of Bern and Zürich and ETH Zürich and the following week the experts in the fields of astrophysics, cosmochemistry and hydrodynamics arranged a meeting in Bern. "In a couple of hours we knew what we had to calculate for our study," says Yann Alibert: "This was only possible within the framework of the NCCR, which links scientists from various fields."

With their calculations, the researchers showed that the time the young planet spent in the mass range of 15 to 50 Earth masses was indeed much longer than previously thought. During this formation phase the collisions with the kilometer-sized rocks provided enough energy to heat the gaseous atmosphere of the young Jupiter and prevented rapid cooling, contraction and further gas accretion.

This is Jupiter photographed by NASA's Cassini spacecraft. 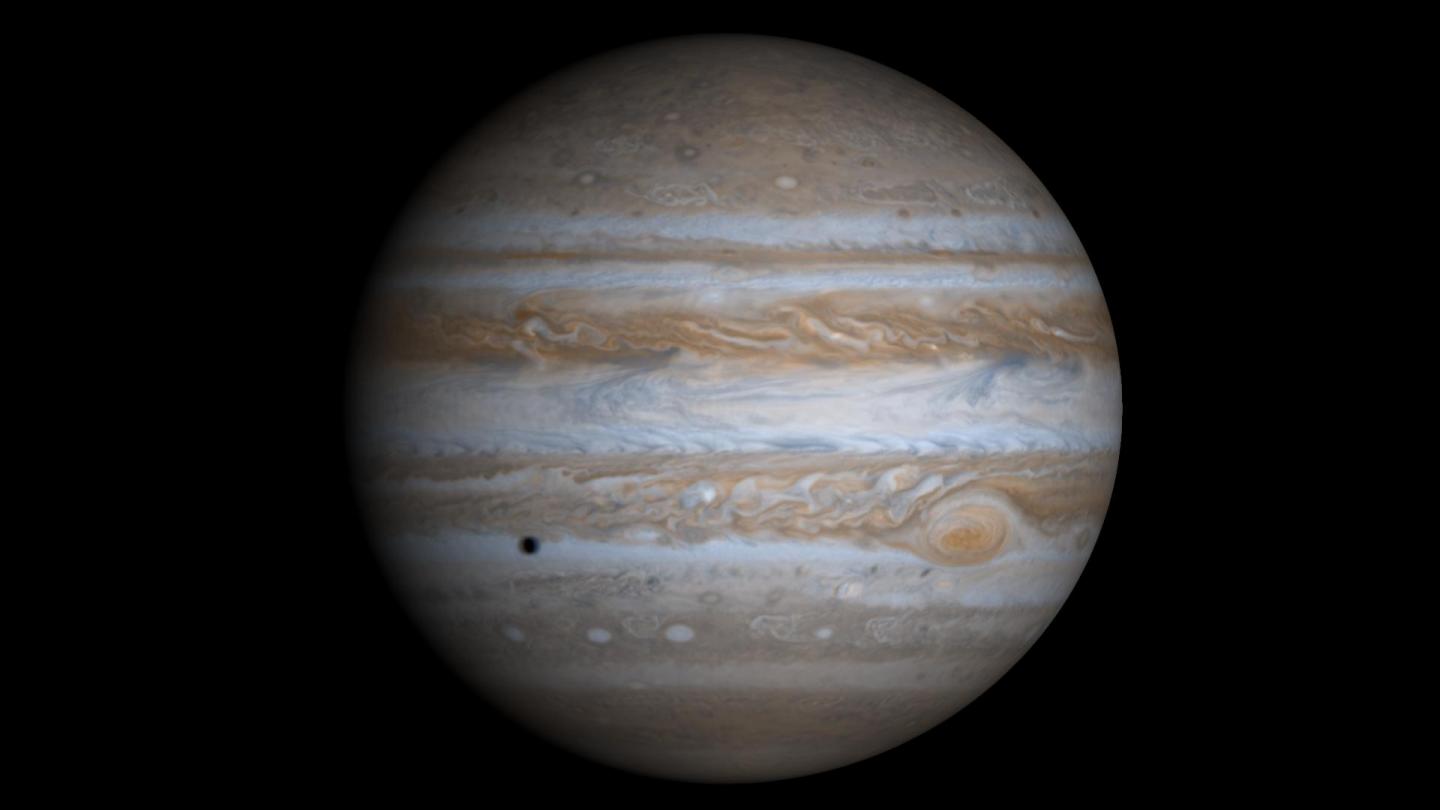 "Pebbles are important in the first stages to build a core quickly, but the heat provided by planetesimals is crucial to delay gas accretion so that it matches the timescale given by the meteorite data," the astrophysicists summarize. They are convinced that their results provide as well key elements for solving long-standing problems of the formation of Uranus and Neptune and exoplanets in this mass regime.