Getting High on Parasitic Worms

Like mammals, parasitic worms have an endocannabinoid system that may help the worm and the hosts it infects survive by reducing pain and inflammation in the host, according to a "wild" new discovery by an interdisciplinary research team at the University of California, Riverside.  There researchers show that in a parasitic worm infection both the host and the worm produce cannabis-like molecules

The research, done on a mouse model, identifies cell signaling pathways associated with the endocannabinoid system that could be targeted to develop therapeutic treatments aimed at eliminating worm infection or improving infection outcomes.

Endocannabinoids are cannabis-like molecules made naturally by our own body to regulate several processes: immune, behavioral, and neuronal. As with cannabis, endocannabinoids can enhance feeding behavior and reduce pain and inflammation. 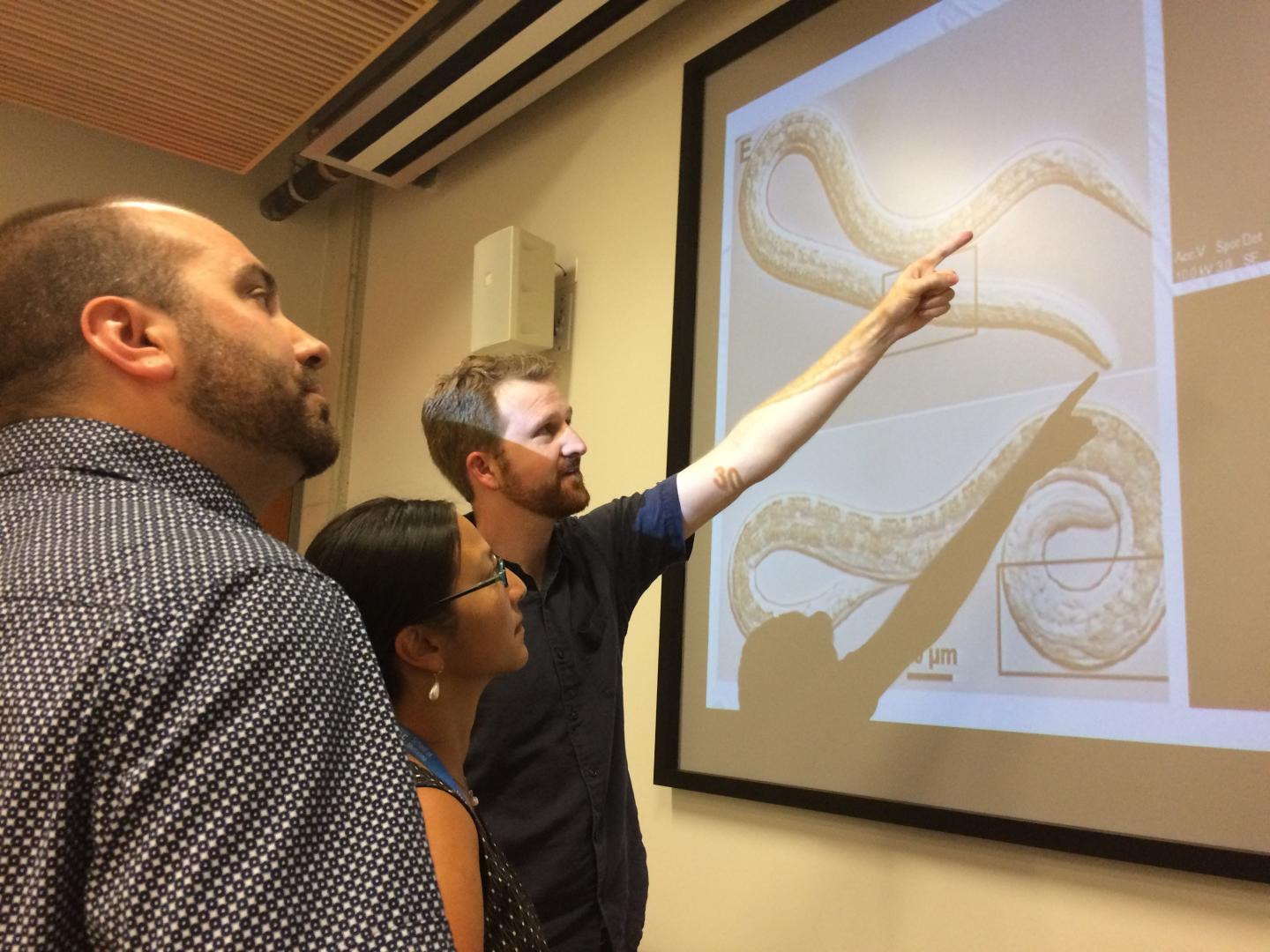 
"Upon worm infection, the host's intestines produce these cannabis-like molecules maybe as a safety net to dampen pain response," said Nicholas V. DiPatrizio, an assistant professor of biomedical sciences at the UCR School of Medicine and co-leader of the research project. "What we now have found is that the worms, too, are producing these natural cannabinoids throughout the infection process and especially when the worms penetrate the skin, further dampening the host's pain response."

Study results appear in the journal Infection and Immunity.

"Until now, no one had investigated endocannabinoids in worm infection," said immunologist and senior author Meera G. Nair, an assistant professor of biomedical sciences in the UCR School of Medicine, who co-led the research project along with DiPatrizio. "We found that endocannabinoids are elevated following worm infection, and they contribute to optimal worm expulsion from the host's body. This is a protective pathway that operates within infection that we were unaware of before. To increase its chances of survival, the worm may use this pathway so the host increases its feeding behavior -- that is, eats more food -- and it can also reduce tissue damage that inflammation and pain cause."

The endocannabinoid system is present in all mammals, but recent studies suggest that it may be more primitive. Indeed, one study reported that black truffle mushrooms make anandamide, a type of endocannabinoid, possibly as a mechanism to attract truffle hogs that eat the truffles and disperse their spores. The worm C. elegans also has an endocannabinoid system that may operate to regulate its feeding.

"This system is known to dampen pain responses," said DiPatrizio, a physiologist specializing in endocannabinoid research. "Upon worm infection, the host's intestines produce these cannabis-like molecules maybe as a safety net to dampen pain response. What we now have found is that the worms, too, are producing these natural cannabinoids throughout the infection process and especially when the worms penetrate the skin, further dampening the host's pain response. This is advantageous to the worm because if the host could detect these parasites, it would respond to kill them. It's a pro-survival signaling pathway in the body that may have a therapeutic advantage in treating worm infection."

Parasitologist Adler R. Dillman, a co-author on the paper, was surprised to find helminthsnaturally producing cannabis-like molecules in their own bodies.

"We were taken aback by this finding," said Dillman, an assistant professor in the UCR Department of Nematology. "It may be important in other infections as well. Consider that the endocannabinoid pathway is present in almost all the worms we examined in this study. What it is telling us is that the pathway is evolutionarily conserved across a vast number of species. This clearly is an old and important system in the body that predates humans."

Dillman's lab found that N. brasiliensis, a gastrointestinal parasite of rats and a widely-studied helminth parasite, produces endocannabinoids, especially anandamide. A bioinformatic search of parasitic worm databases revealed this system is conserved within many parasitic nematodes, including the most prevalent helminths of man: roundworm and hookworm.

For Nair, this is the team's "wildest discovery, its biggest finding."

This photo shows the research team. 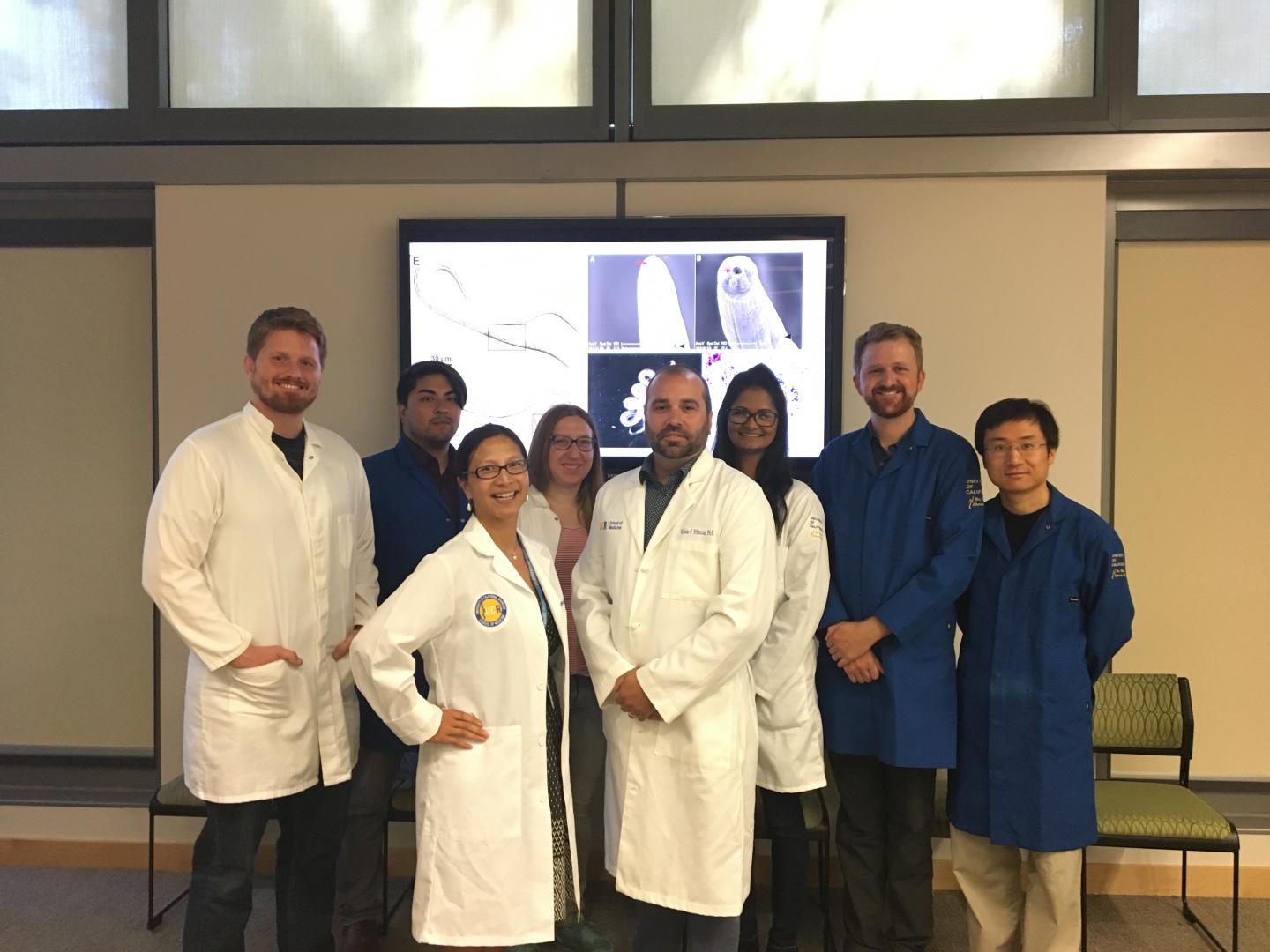 "It could impact behavior, pain, and host-helminth interactions," she said. "Without the endocannabinoid system, infected hosts would have bigger worm burdens. In the lab, when we inhibited this pathway in mice, they were worse off -- they ended up with more worms in their bodies."

Nair, DiPatrizio, and Dillman recently received a two-year, $275,000 grant from the National Institutes of Health to further pursue the research and investigate how the endocannabinoid system affects immune response.

"Our current study focused on hookworms; we are ready now to investigate other helminths," Nair said. "We will investigate whether the host and worm induce endocannabinoids so that the host may have less tissue inflammation and may have improved feeding behavior. Since the worms depletes the host of nutrients, it would make sense that they would trigger strategies to improve feeding."

Nair, a hookworm expert, explained that hookworms bite the intestine and feed on blood, leading to micro-injuries and likely localized pain throughout the well-innervated intestine.

"Since endocannabinoids relieve pain and inflammation, local endocannabinoid production may be beneficial for the host, and perhaps the worm to still remain undetected by the host," she said. "We plan to investigate this further."

"The anti-inflammatory endocannabinoid system gives us insight into potential therapeutic targets for not only hookworm infection, but also celiac disease and inflammatory bowel disease," said DiPatrizio, whose laboratory is also the only one at UCR authorized to study the impact of cannabis exposure, which hijacks the endocannabinoid system, on a host of pathologies and behavior, including gastrointestinal function.

Dillman stressed that until now no one knew worms were manipulating the endocannabinoid pathway.

"Our work has provoked more interesting research questions for us to pursue, and could lead to promising treatments," he said. "We are at just the initial point of discovery."

The research was supported by grants from the National Institutes of Health. The UCR School of Medicine provided additional support.

Contacts and sources:
Iqbal Pittalwala
The University of California, Riverside
on August 22, 2018