A team of astronomers has discovered a new way to unlock the mysteries of how the first galaxies formed and evolved.

In a study published today in Astrophysical Journal Letters, lead author Dawn Erb of the University of Wisconsin-Milwaukee and her team - for the very first time - used new capabilities at W. M. Keck Observatory on Maunakea, Hawaii to examine Q2343-BX418, a small, young galaxy located about 10 billion light years away from Earth.

This distant galaxy is an analog for younger galaxies that are too faint to study in detail, making it an ideal candidate for learning more about what galaxies looked like shortly after the birth of the universe.

This is an artist's concept showing the gaseous halo surrounding a galaxy, illuminated by a narrow band of ultraviolet light called Lyman alpha emission. BX418's gas halo is about ten times the size of the galaxy itself. 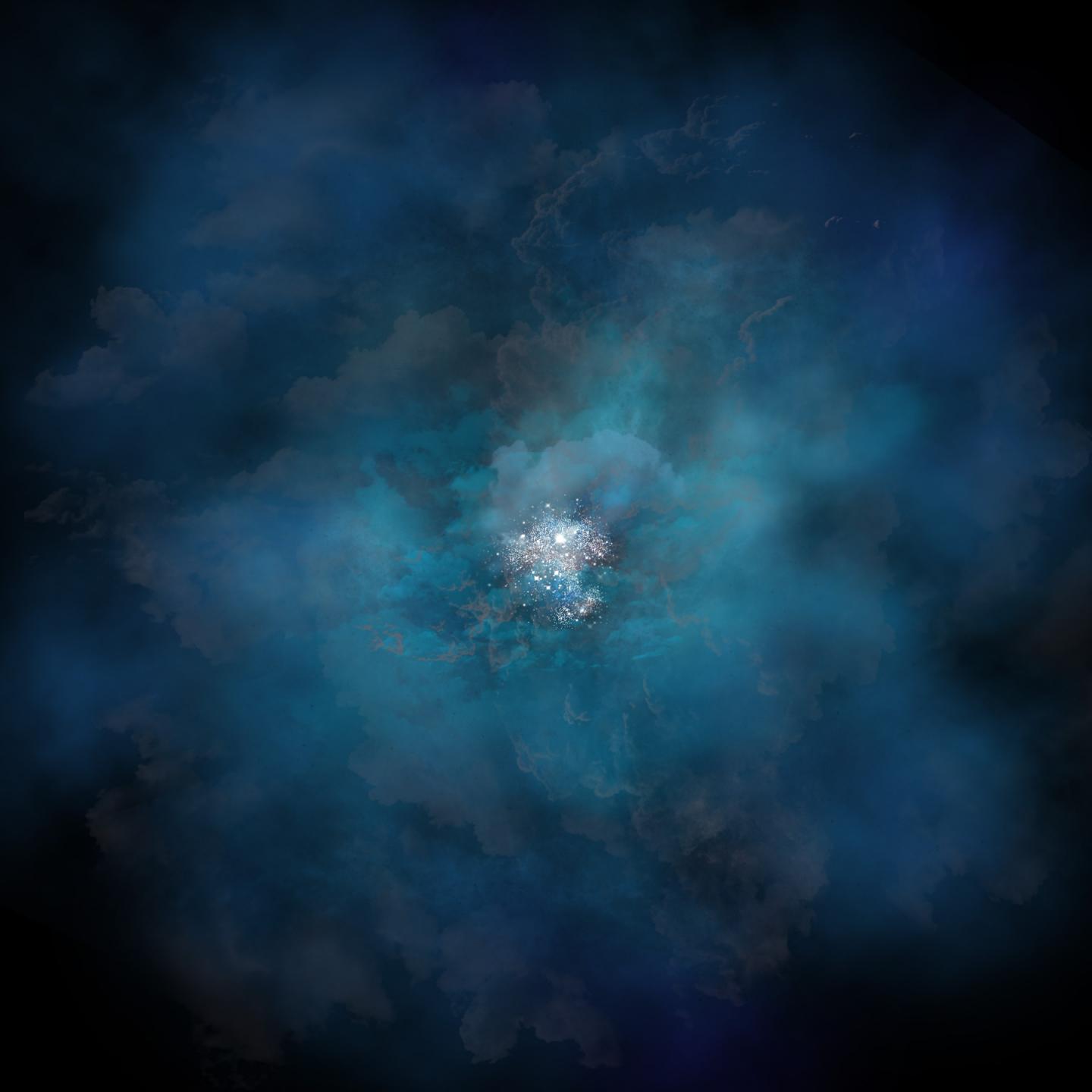 
BX418 is also attracting astronomers' attention because its gas halo is giving off a special type of light.

"In the last several years, we've learned that the gaseous halos surrounding galaxies glow with a particular ultraviolet wavelength called Lyman alpha emission. There are a lot of different theories about what produces this Lyman alpha emission in the halos of galaxies, but at least some of it is probably due to light that is originally produced by star formation in the galaxy being absorbed and re-emitted by gas in the halo," said Erb.

Erb's team, which includes Charles Steidel and Yuguang Chen of Caltech, used one of the observatory's newest instruments, the Keck Cosmic Web Imager (KCWI), to perform a detailed spectral analysis of BX418's gas halo; its properties could offer clues about the stars forming within the galaxy.

"Most of the ordinary matter in the universe isn't in the form of a star or a planet, but gas. And most of that gas exists not in galaxies, but around and between them," said Erb.

The halo is where gas enters and exits the system. The gas surrounding galaxies can fuel them; gas from within a galaxy can also escape into the halo. This inflow and outflow of gas influences the fate of stars.

"The inflow of new gas accreting into a galaxy provides fuel for new star formation, while outflows of gas limit a galaxy's ability to form stars by removing gas," says Erb.

"So, understanding the complex interactions happening in this gaseous halo is key to finding out how galaxies form stars and evolve."

This study is part of a large ongoing survey that Steidel has been leading for many years. Previously, Steidel's team studied BX418 using other instruments at Keck Observatory.

This most recent study using KCWI adds detail and clarity to the image of the galaxy and its gas halo that was not possible before; the instrument is specifically engineered to study wispy currents of faint gas that connect galaxies, known as the cosmic web.

"Our study was really enabled by the design and sensitivity of this new instrument. It's not just an ordinary spectrograph--it's an integral field spectrograph, which means that it's a sort of combination camera and spectrograph, where you get a spectrum of every pixel in the image," said Erb.

Astronomer Dawn Erb, PhD, University of Wisconsin-Milwaukee, has devoted her life to uncovering the secrets of galaxy growth and evolution. 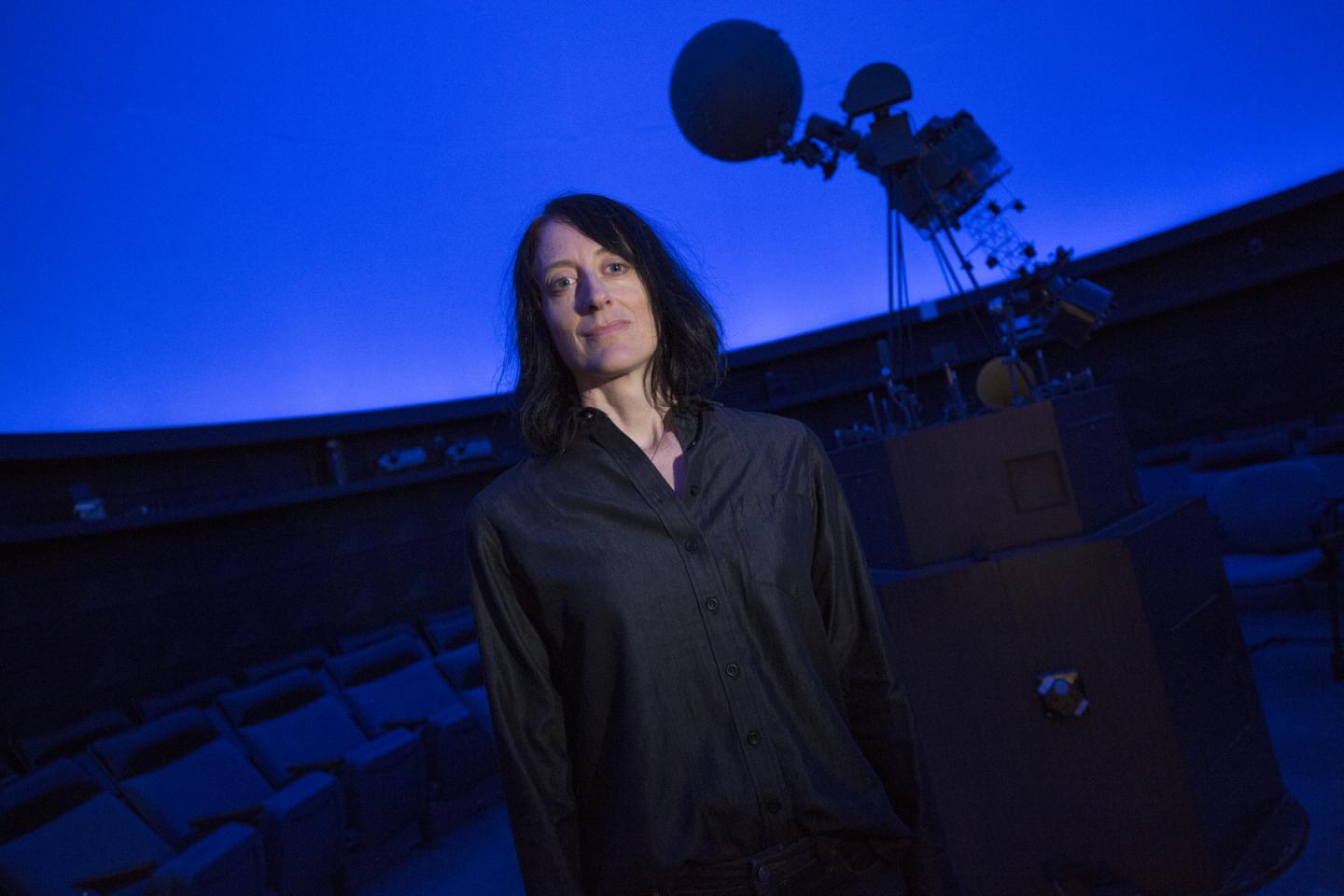 The power of KCWI, combined with the Keck telescopes' location on Maunakea where viewing conditions are among the most pristine on Earth, provides some of the most detailed glimpses of the cosmos.

Erb's team used KCWI to take spectra of the Lyman alpha emission of BX418's halo. This allowed them to trace the gas, plot its velocity and spatial extent, then create a 3-D map showing the structure of the gas and its behavior.

The team's data suggests that the galaxy is surrounded by a roughly spherical outflow of gas and that there are significant variations in the density and velocity range of this gas.

Erb says this analysis is the first of its kind. Because it has only been tested on one galaxy, other galaxies need to be studied to see if these results are typical.

Now that the team has discovered a new way to learn about the properties of the gaseous halo, the hope is that further analysis of the data they collected and computer simulations modeling the processes will yield additional insights into the characteristics of the first galaxies in our universe.

Erb is supported by the US National Science Foundation through the Faculty Early Career Development Program, grant AST-125591. Steidel and Chen acknowledge support from the Caltech/JPL President's and Director's Fund.

The Keck Cosmic Web Imager (KCWI) is designed to provide visible band, integral field spectroscopy with moderate to high spectral resolution formats and excellent sky-subtraction. The astronomical seeing and large aperture of the telescope will enable studies of the connection between galaxies and the gas in their dark matter halos, stellar relics, star clusters, and lensed galaxies. Support for this project was provided by The Heising-Simons Foundation, Gordon and Betty Moore Foundation, Mt. Cuba Astronomical Foundation, and other Friends of Keck Observatory.