Astronomers and physicists around the world, including in Hawaii, have begun to unravel a long-standing cosmic mystery. Using a vast array of telescopes in space and on Earth, they have identified a source of cosmic rays--highly energetic particles that continuously rain down on Earth from space.

In a paper published this week in the journal Science, scientists have, for the first time, provided evidence for a known blazar, designated TXS 0506+056, as a source of high-energy neutrinos. At 8:54 p.m. on September 22, 2017, the National Science Foundation-supported IceCube neutrino observatory at the South Pole detected a high energy neutrino from a direction near the constellation Orion. Just 44 seconds later an alert went out to the entire astronomical community.

The All Sky Automated Survey for SuperNovae team (ASAS-SN), an international collaboration headquartered at Ohio State University, immediately jumped into action. ASAS-SN uses a network of 20 small, 14-centimeter telescopes in Hawaii, Texas, Chile and South Africa to scan the visible sky every 20 hours looking for very bright supernovae. It is the only all-sky, real-time variability survey in existence.

Artist’s impression of a blazar emitting neutrinos and gamma rays.

"When ASAS-SN receives an alert from IceCube, we automatically find the first available ASAS-SN telescope that can see that area of the sky and observe it as quickly as possible," said Benjamin Shappee, an astronomer at the University of Hawaii's Institute for Astronomy and an ASAS-SN core member.

On September 23, only 13 hours after the initial alert, the recently commissioned ASAS-SN unit at McDonald Observatory in Texas mapped the sky in the area of the neutrino detection. Those observations and the more than 800 images of the same part of the sky taken since October 2012 by the first ASAS-SN unit, located on Maui's Haleakala, showed that TXS 0506+056 had entered its highest state since 2012.

"The IceCube detection and the ASAS-SN detection combined with gamma-ray detections from NASA's Fermi gamma-ray space telescope and the MAGIC telescopes that show TXS 0506+056 was undergoing the strongest gamma-ray flare in a decade, indicate that this could be the first identified source of high-energy neutrinos, and thus a cosmic-ray source," said Anna Franckowiak, ASAS-SN and IceCube team member, Helmholtz Young Investigator, and staff scientist at DESY in Germany.

Since they were first detected more than one hundred years ago, cosmic rays have posed an enduring mystery: What creates and launches these particles across such vast distances? Where do they come from?

One of the best suspects have been quasars, supermassive black holes at the centers of galaxies that are actively consuming gas and dust. Quasars are among the most energetic phenomena in the universe and can form relativistic jets where elementary particles are accelerate and launched at nearly the speed of light. If that jet happens to be pointed toward Earth, the light from the jet outshines all other emission from the host galaxy and the highly accelerated particles are launched toward the Milky Way. This specific type of quasar is called a blazar.

However, because cosmic rays are charged particles, their paths cannot be traced directly back to their places of origin. Due to the powerful magnetic fields that fill space, they don't travel along a straight path. Luckily, the powerful cosmic accelerators that produce them also emit neutrinos, which are uncharged and unaffected by even the most powerful magnetic fields. Because they rarely interact with matter and have almost no mass, these "ghost particles" travel nearly undisturbed from their cosmic accelerators, giving scientists an almost direct pointer to their source.

The ASAS-SN telescope on Haleakala on the island of Maui. 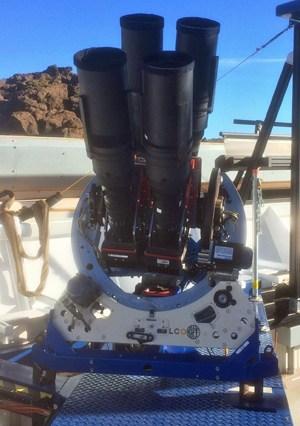 Detecting the highest energy neutrinos requires a massive particle detector, and the National Science Foundation-supported IceCube observatory is the world's largest. The detector is composed of more than 5,000 light sensors arranged in a grid, buried in a cubic kilometer of deep, pristine ice a mile beneath the surface at the South Pole. When a neutrino interacts with an atomic nucleus, it creates a secondary charged particle, which, in turn, produces a characteristic cone of blue light that is detected by IceCube's grid of photomultiplier tubes. Because the charged particle and the light it creates stay essentially true to the neutrino's original direction, they give scientists a path to follow back to the source.

About 20 observatories on Earth and in space have also participated in this discovery. This includes the 8.4-meter Subaru Telescope on Maunakea, which was used to observe the host galaxy of TXS 0506+056 in an attempt to measure its distance, and thus determine the intrinsic luminosity, or energy output, of the blazar. These observations are difficult, because the blazar jet is much brighter than the host galaxy. Disentangling the jet and the host requires the largest telescopes in the world, like those on Maunakea.

"This discovery demonstrates how the many different telescopes and detectors around and above the world can come together to tell us something amazing about our Universe. This also emphasizes the critical role that telescopes in Hawaii play in that community," said Shappee.

Contacts and sources:
Ben Shappee
University of Hawaii at Manoa