In an achievement that has significant implications for research, medicine, and industry, UC San Francisco scientists have genetically reprogrammed the human immune cells known as T cells without using viruses to insert DNA.

The researchers said they expect their technique—a rapid, versatile, and economical approach employing CRISPR gene-editing technology—to be widely adopted in the burgeoning field of cell therapy, accelerating the development of new and safer treatments for cancer, autoimmunity, and other diseases, including rare inherited disorders.

The new method, described in the July 11, 2018 issue of Nature, offers a robust molecular “cut and paste” system to rewrite genome sequences in human T cells. It relies on electroporation, a process in which an electrical field is applied to cells to make their membranes temporarily more permeable. After experimenting with thousands of variables over the course of a year, the UCSF researchers found that when certain quantities of T cells, DNA, and the CRISPR “scissors” are mixed together and then exposed to an appropriate electrical field, the T cells will take in these elements and integrate specified genetic sequences precisely at the site of a CRISPR-programmed cut in the genome.

“This is a rapid, flexible method that can be used to alter, enhance, and reprogram T cells so we can give them the specificity we want to destroy cancer, recognize infections, or tamp down the excessive immune response seen in autoimmune disease,” said UCSF’s Alex Marson, MD, PhD, associate professor of microbiology and immunology, a member of the UCSF Helen Diller Family Comprehensive Cancer Center, and senior author of the new study. “Now we’re off the races on all these fronts.” 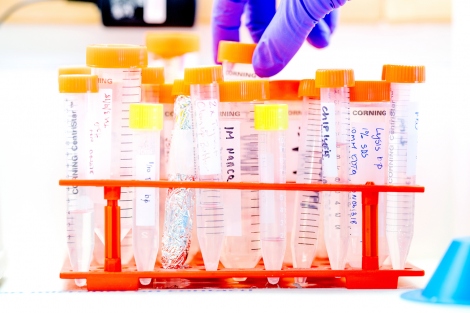 But just as important as the new technique’s speed and ease of use, said Marson, also scientific director of biomedicine at the Innovative Genomics Institute, is that the approach makes it possible to insert substantial stretches of DNA into T cells, which can endow the cells with powerful new properties. Members of Marson’s lab have had some success using electroporation and CRISPR to insert bits of genetic material into T cells, but until now, numerous attempts by many researchers to place long sequences of DNA into T cells had caused the cells to die, leading most to believe that large DNA sequences are excessively toxic to T cells.

To demonstrate the new method’s versatility and power, the researchers used it to repair a disease-causing genetic mutation in T cells from children with a rare genetic form of autoimmunity, and also created customized T cells to seek and kill human melanoma cells.

Viruses cause infections by injecting their own genetic material through cell membranes, and since the 1970s scientists have exploited this capability, stripping viruses of infectious features and using the resulting “viral vectors” to transport DNA into cells for research, gene therapy, and in a well-publicized recent example, to create the CAR-T cells used in cancer immunotherapy.

T cells engineered with viruses are now approved by the U.S. Food and Drug Administration to combat certain types of leukemia and lymphoma. But creating viral vectors is a painstaking, expensive process, and a shortage of clinical-grade vectors has led to a manufacturing bottleneck for both gene therapies and cell-based therapies. Even when available, viral vectors are far from ideal, because they insert genes haphazardly into cellular genomes, which can damage existing healthy genes or leave newly introduced genes ungoverned by the regulatory mechanisms that ensure that cells function normally. These limitations, which could potentially lead to serious side effects, have been cause for concern in both gene therapy and cell therapies such as CAR-T-based immunotherapy.

“There has been thirty years of work trying to get new genes into T cells,” said first author Theo Roth, a student pursuing MD and PhD degrees in UCSF’s Medical Scientist Training Program who designed and led the new study in Marson’s lab. “Now there should no longer be a need to have six or seven people in a lab working with viruses just to engineer T cells, and if we begin to see hundreds of labs engineering these cells instead of just a few, and working with increasingly more complex DNA sequences, we’ll be trying so many more possibilities that it will significantly speed up the development of future generations of cell therapy.”

After nearly a year of trial-and-error, Roth determined the ratios of T cell populations, DNA quantity, and CRISPR abundance that, combined with an electrical field delivered with the proper parameters, would result in efficient and accurate editing of the T cells’ genomes.

The research team created CRISPR guides that would cause green fluorescent protein to be expressed in only certain cellular locations and structures. 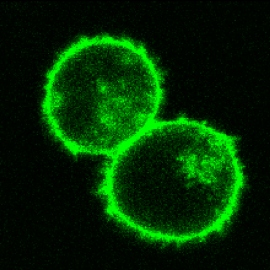 To validate these findings, Roth directed CRISPR to label an array of different T cell proteins with green fluorescent protein (GFP), and the outcome was highly specific, with very low levels of “off-target” effects: each subcellular structure Roth’s CRISPR-Cas9 templates had been designed to tag with GFP—and no others—glowed green under the microscope.

Then, in complementary experiments devised to serve as proof-of-principle of the new technique’s therapeutic promise, Roth, Marson, and colleagues showed how it could potentially be used to marshal T cells against either autoimmune disease or cancer.

In the first example, Roth and colleagues used T cells provided to the Marson lab by Yale School of Medicine’s Kevan Herold, MD. The cells came from three siblings with a rare, severe autoimmune disease that has so far been resistant to treatment. Genomic sequencing had shown that the T cells in these children carried mutations in a gene called IL2RA. This gene carries instructions for a cell-surface receptor essential for the development of regulatory T cells, or Tregs, which keep other immune cells in check and prevent autoimmunity.

With the non-viral CRISPR technique, the UCSF team was able to quickly repair the IL2RA defect in the children’s T cells, and to restore cellular signals that had been impaired by the mutations. In CAR-T therapy, T cells that have been removed from the body are engineered to enhance their cancer-fighting ability, and then returned to the body to target tumors. The researchers hope that a similar approach could be effective for treating autoimmune diseases in which Tregs malfunction, such as that seen in the three children with the IL2RA mutations.

In a second set of experiments conducted in collaboration with Cristina Puig-Saus, PhD, and Antoni Ribas, MD, of the Parker Institute for Cancer Immunotherapy at UCLA, the scientists completely replaced native T cell receptors in a population of normal human T cells with new receptors that had been specifically engineered to seek out a particular subtype of human melanoma cells. T cell receptors are the sensors the cells use to detect disease or infection, and in lab dishes the engineered cells efficiently homed in on the targeted melanoma cells while ignoring other cells, exhibiting the sort of specificity that is a major goal of precision cancer medicine.

Without using viruses, the researchers were able to generate large numbers of CRISPR-engineered cells reprogrammed to display the new T cell receptor. When transferred into mice implanted with human melanoma tumors, the engineered human T cells went to the tumor site and showed anti-cancer activity.

“This strategy of replacing the T cell receptor can be generalized to any T cell receptor,” said Marson, also a member of the Parker Institute for Cancer Immunotherapy at UCSF and a Chan Zuckerberg Biohub Investigator. “With this new technique we can cut and paste into a specified place, rewriting a specific page in the genome sequence.”

Roth said that because the new technique makes it possible to create viable custom T cell lines in a little over a week, it has already transformed the research environment in Marson’s lab. Ideas for experiments that were previously deemed too difficult or expensive because of the obstacles presented by viral vectors—are now ripe for investigation. “We’ll work on 20 ‘crazy’ ideas,” Roth said, “because we can create CRISPR templates very rapidly, and as soon as we have a template we can get it into T cells and grow them up quickly.”

Marson attributes the new method’s success with Roth’s “absolute perseverance” in the face of the widespread beliefs that viral vectors were necessary and that only small pieces of DNA could be tolerated by T cells. “Theo was convinced that if we could figure out the right conditions we could overcome these perceived limitations, and he put in a Herculean effort to test thousands of different conditions: the ratio of the CRISPR to the DNA; different ways of culturing the cells; different electrical currents. By optimizing each of these parameters and putting the best conditions together he was able to see this astounding result.”

See the study online for a complete list of authors, as well as funding information. Marson is a co-founder of Spotlight Therapeutics, and serves as an advisor to Juno Therapeutics and PACT Pharma. The Marson laboratory has received sponsored funding for Juno, Epinomics, and Sanofi, as well as a gift from Gilead Sciences. Roth, Puig-Saus, Eric Shifrut, PhD, Ribas, and Marson are inventors on new patent applications related to this research.