Fossils of a new genus and species of an ankylosaurid dinosaur--Akainacephalus johnsoni-- have been unearthed in the Kaiparowits Formation of Grand Staircase-Escalante National Monument (GSENM), in Kane County, southern Utah, U.S.A., and are revealing new details about the diversity and evolution of this group of armored dinosaurs. Expected to look like other North American Late Cretaceous ankylosaurid dinosaurs with smooth bony armor on the skull, the new research suggests just the opposite and indicates that the defining features of Akainacephalus, specifically the spiky bony armor covering the skull and snout, align more closely with Asian ankylosaurids, who also have more pronounced spikes covering their skulls.

Akainacephalus was announced today in the open-access scientific journal PeerJ and unveiled on exhibit in the Past Worlds Gallery of the Natural History Museum of Utah at the Rio Tinto Center in Salt Lake City, Utah. The genus name is derived from the Greek words akaina, which means 'thorn' or 'spike', and cephalus, meaning 'head.' The species epithet johnsoni honors Randy Johnson, a dedicated museum volunteer who skillfully prepared its skull. Other talented volunteers helped to prepare the rest of the specimen.

Credit: Andrey Atuchin and the Denver Museum of Nature & Science

"I'm a retired chemist, but I've always been interested in most of the science disciplines. I never thought that I would have the opportunity to actually work on fossils that could be important for paleontologists," said Randy Johnson. "Now that I'm a museum volunteer, I'm getting the opportunity to work on a large variety of fossils and consult with top paleontologists - it's like a dream second career. I couldn't believe it when they told me they are naming the ankylosaur after me, a once in a lifetime honor," said Johnson.

Ankylosaurids are a group of four-legged herbivorous armored dinosaurs with imposing bony tail clubs. Though ankylosaurids originated in Asia between 125 - 100 million years ago, they do not appear in the western North American fossil record until ~77 million years ago. The new species Akainacephalus lived 76 million years ago during the Late Cretaceous Period and offers the most complete skeleton of an ankylosaurid dinosaur found in the southwestern US. It includes a complete skull, much of the vertebral column, including a complete tail club, several fore and hind limbs elements, and bony body armor that includes two neck rings and spiked armor plates.

The unique arrangement of bony armor in the shape of small cones and pyramids covering the snout and head is the key research finding indicating that Akainacephalus is closely related to the New Mexican ankylosaurid Nodocephalosaurus kirtlandensis. Surprisingly, Akainacephalus and Nodocephalosaurus are more closely related to Asian ankylosaurids such as Saichania and Tarchia than to other Late Cretaceous North American ankylosaurids, including Ankylosaurus and Euoplocephalus. Both of the latter taxa possess flat skull armor.

"A reasonable hypothesis would be that ankylosaurids from Utah are related to those found elsewhere in western North America, so we were really surprised to discover that Akainacephalus was so closely related to species from Asia," remarked Randall Irmis, co-author of the study.

A Natural History Museum of Utah field crew excavate bones from the skeleton of Akainacephalus johnsoni in 2009. 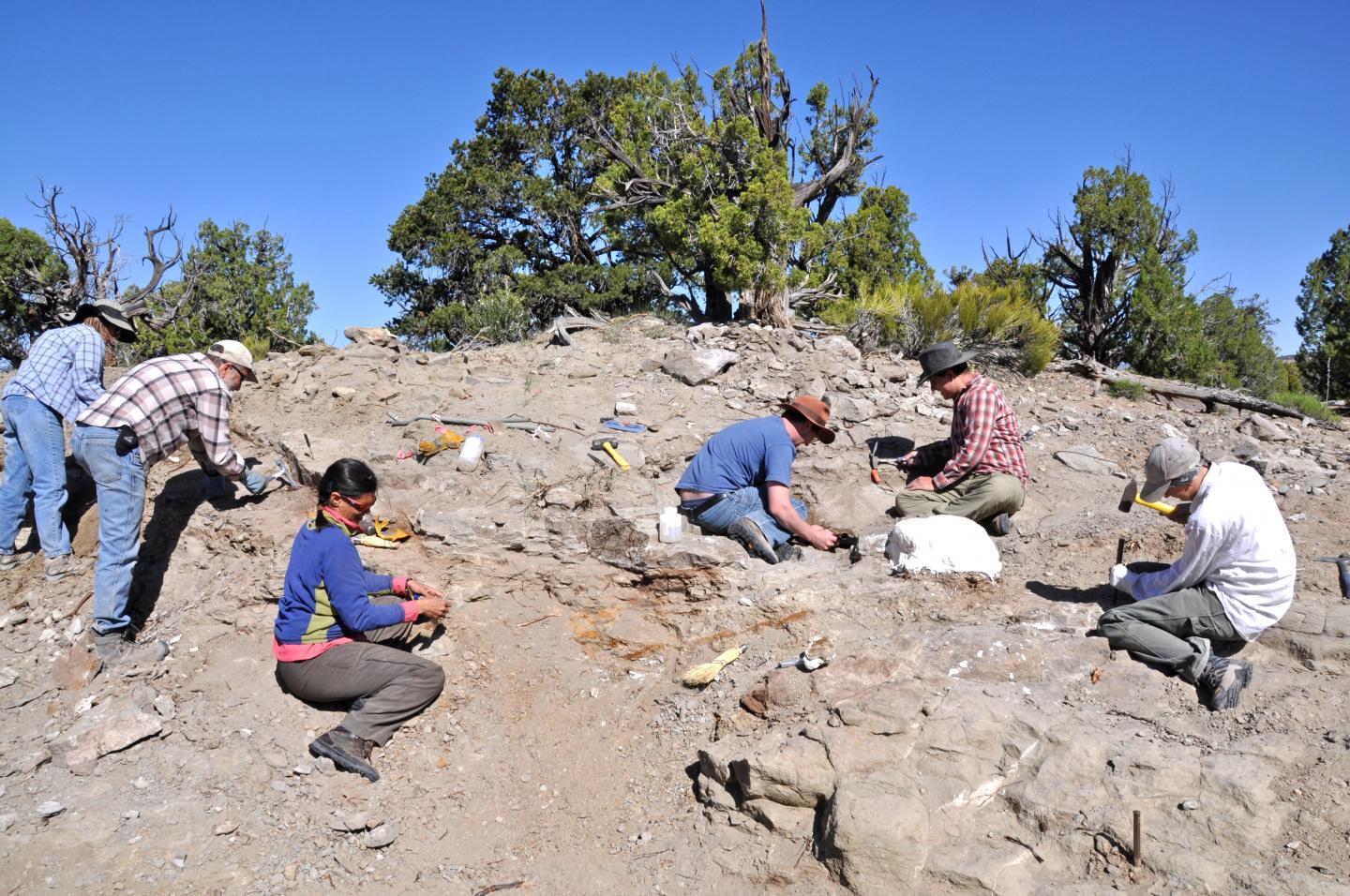 Lead author Jelle Wiersma suggests that the geographic distribution of Late Cretaceous ankylosaurids throughout the Western Interior was the result of several geologically brief intervals of lowered sea level that allowed Asian ankylosaurid dinosaurs to immigrate to North America several times during the Late Cretaceous, resulting in the presence of two separate groups of ankylosaurid dinosaurs. This lowering of sea levels exposed the Beringian land bridge, allowing dinosaurs and other animals to move between Asia and North America.

"It is always exciting to name a new fossil taxon, but it is equally exciting if that taxon also provides additional insights into the bigger picture of its life, such as its diet or aspects of its behavior, and the environment it lived in," said Wiersma. "Such is exactly the case with Akainacephalus johnsoni; not only is this the first described and named Late Cretaceous ankylosaurid dinosaur from Utah, but this unique animal also strengthens the evidence that distinct northern and southern provincialism existed during the late Campanian stage in Laramidia, because to date, we don't see this type of ankylosaurid dinosaurs in the fossil record of northern Laramidia," he said.

Wiersma explained that additionally, together with its close relative Nodocephalosaurus from New Mexico, Akainacephalus looks very different compared to other North American ankylosaurids such as Ankylosaurus, but instead, look much more like Asian ankylosaurids including Saichania and Tarchia. From these observations we can conclude that at least two immigration events took place during Late Cretaceous times when lowered sea levels exposed the Beringian land bridge, connecting Asia with western North America.

Ankylosaurid dinosaurs, among many other groups of animals, eventually crossed this land bridge, emigrating from Asia into western North America, resulting into two different types of Late Cretaceous ankylosaurid dinosaurs: ones that evolved flatter skull armor like Ankylosaurus and Euoplocephalus, and ones possessing very spiky skull armor such as Akainacephalus and Nodocephalosaurus.

Expert preparator Randy Johnson, spent hundreds of hours removing the Akainacephalus johnsoni skeleton from the surrounding rock and debris. The species portion of the dinosaur name was selected in his honor. 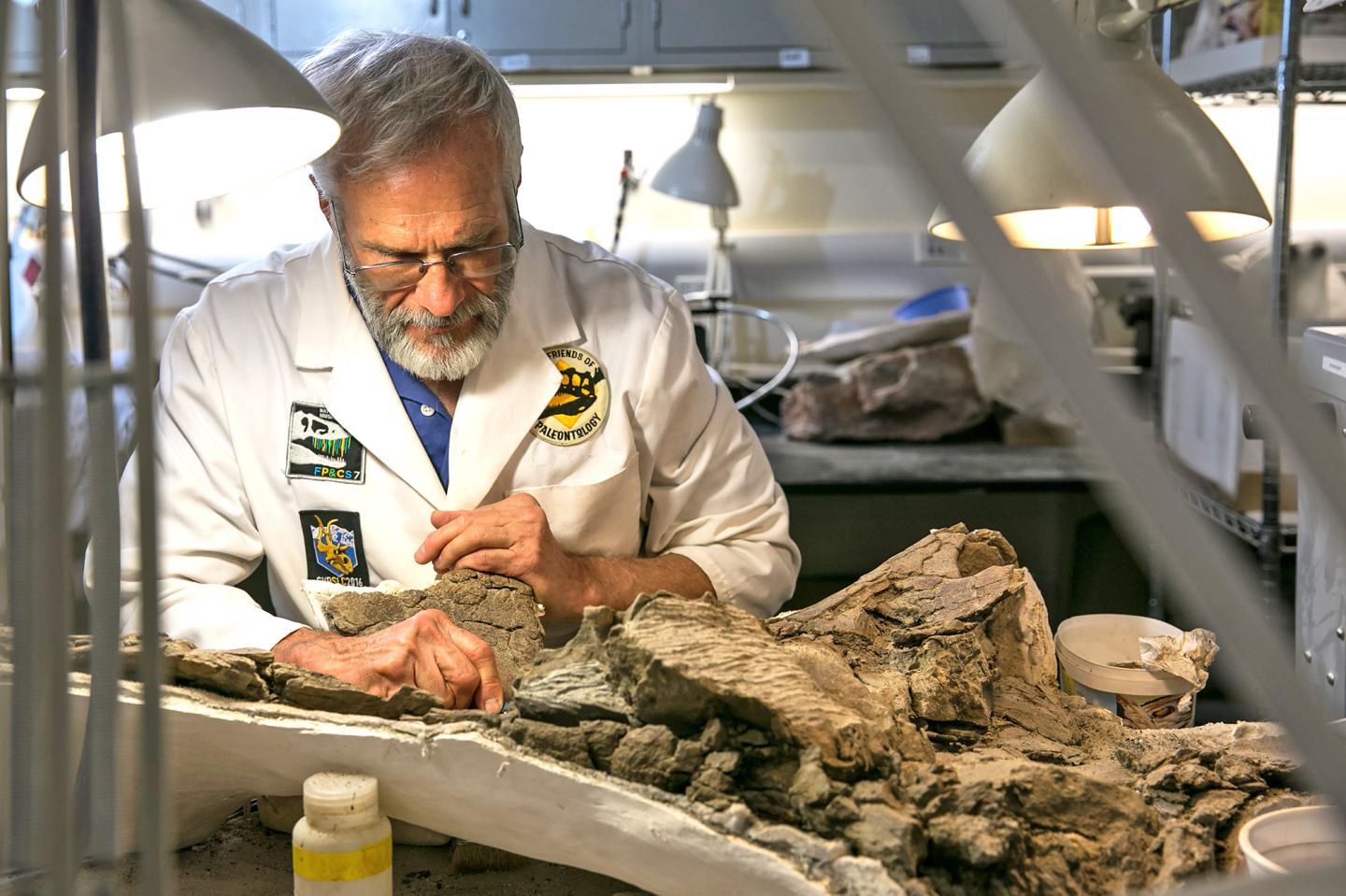 "It is extremely fascinating and important for the science of paleontology that we can read so much information from the fossil record, allowing us to better understand extinct organisms and the ecosystems they were a part of," concluded Wiersma.

These new findings are part of a study funded in large part by the Bureau of Land Management, as well as the Geological Society of America, and a University of Utah Department of Geology & Geophysics Graduate Student Grant. The project was led by University of Utah M.Sc. student Jelle Wiersma, now a Ph.D. student in the Dept. of Geosciences at James Cook University, Queensland, Australia. Wiersma was advised by co-author Dr. Randall Irmis, chief curator and curator of paleontology at the Natural History Museum of Utah, and associate professor in the Dept. of Geology and Geophysics, University of Utah.

Anklysaurid Dinosaurs on the Lost Continent of Southern Laramidia

Akainacephalus johnsoni was discovered in Grand Staircase-Escalante National Monument (GSENM) which encompasses a large area of high desert terrain in south-central Utah. This vast and rugged region, part of the National Landscape Conservation System administered by the Bureau of Land Management (BLM), was the last major area in the lower 48 states to be formally mapped by cartographers.

During the Late Cretaceous, GSENM was in the southern portion of Laramidia, which stretched from the Arctic Circle to the Gulf of Mexico. Akainacephalus is part of a growing number of new dinosaur discoveries over the past 15 years demonstrating the incredible diversity of animals and plants living on Laramidia between 80-75 million years ago. One of the most exciting conclusions from this work is that nearly every species of dinosaur discovered in GSENM is new to science, and Akainacephalus is no exception. Other recently discovered species include large and small meat-eating dinosaurs (e.g., tyrannosaurs), horned dinosaurs, and duck-billed dinosaurs. "A major long-term goal of our work in southern Utah is to try and understand why the species in GSENM differ from relatives of the same geologic age found in other parts of Laramidia," said Wiersma. Hypotheses for the differences include changes in sea level, climate differences across latitude, and physical barriers to animal movement such as mountains and large rivers.

(2) Akainacephalus is the most complete Late Cretaceous ankylosaurid dinosaur discovered from Utah and the southwestern U.S., and is distinguished by a number of unique features, including spikes and cones of the bony exterior covering the head and snout.

(3) The spikes and cones of bony armor on the skull of Akainacephalus are similar to those found on the New Mexican ankylosaurid Nodocephelausaurus kirtlandensis but distinct from all other known Late Cretaceous Laramidian ankylosaurids such as Ankylosaurus, Euoplocephalus, and Ziapelta, indicating these two species are more closely related to some Asian ankylosaurids.

The first part of the name, Akaina, is a Greek word that can be translated to spike or thorn. The second part of the name cephalus means head, and the epithet johnsonihonors Randy Johnson, a dedicated paleontology volunteer at the Natural History Museum of Utah who prepared the specimen's skull.

Akainacephalus belongs to a group of herbivorous armored dinosaurs called anklosaurids that lived in Asia and western North America during the Late Cretaceous Period (100-66 million years ago). One of the unique features of ankylosaurid dinosaurs is the presence of a characteristic bony tail club.

Akainacephalus walked on four legs, which were positioned directly underneath his body.
Akainacephalus was covered in bony armor from head to tail, with various sized and shaped bony plates, called osteoderms, which are thought to provide protection.
Akainacephalus is characterized by its elaborate covering of spikes and horns on the skull, as well a large bony club at the end of its tail.
Akainacephalus presumably had small, leaf-shaped teeth for eating plants. These fell out of the jaw after death, but before the skeleton was buried by sediment.

Akainacephalus was discovered in 76 Ma old rocks of the Kaiparowits Formation, a geological/stratigraphic unit exposed in southern Utah consisting of sedimentary rocks deposited by rivers and streams.

Akainacephalus was first discovered in 2008 during a museum-led paleontological expedition in a remote area of BLM-administered Grand Staircase-Escalante National Monument (GSENM) in Kane County, southern Utah, USA. The site was discovered by BLM employee Scott Richardson.
The bones of Akainacephalus that were discovered include a complete skull, bony armor that includes neck rings and spiked plates, many vertebrae, forelimb and hindlimb bones, and a near complete tail with tail club.

Akainacephalus was found together with skeletons of several other animals at the same site, including a duck-bill dinosaur (Gryposaurus), a recently-described species of turtle (Arvinachelys), and a yet unnamed relative of alligators and caimans).

It required almost four years to fully prepare all of the bones of Akainacephalus.
Preparation of the skull was done by museum volunteer Randy Johnson, who is honored in the new name, Akainacephalus johnsoni