Researchers Engineer Bacteria to Create Fertilizer Out of Thin Air

In the future, plants will be able to create their own fertilizer. Farmers will no longer need to buy and spread fertilizer for their crops, and increased food production will benefit billions of people around the world, who might otherwise go hungry.

These statements may sound like something out of a science fiction novel, but new research by Washington University in St. Louis scientists show that it might soon be possible to engineer plants to develop their own fertilizer. This discovery could have a revolutionary effect on agriculture and the health of the planet.

The research, led by Himadri Pakrasi, the Glassberg-Greensfelder Distinguished University Professor in the Department of Biology in Arts & Sciences and director of the International Center for Energy, Environment and Sustainability (InCEES); and Maitrayee Bhattacharyya-Pakrasi, senior research associate in biology, was published in the May/June issue of mBio.

Himadri Pakrasi (left), led a team of researchers that has created a bacteria that uses photosynthesis to create oxygen during the day, and at night, uses nitrogen to create chlorophyll for photosynthesis. The team included Michelle Liberton (second from left), Deng Liu and Maitrayee Bhattacharyya-Pakrasi. 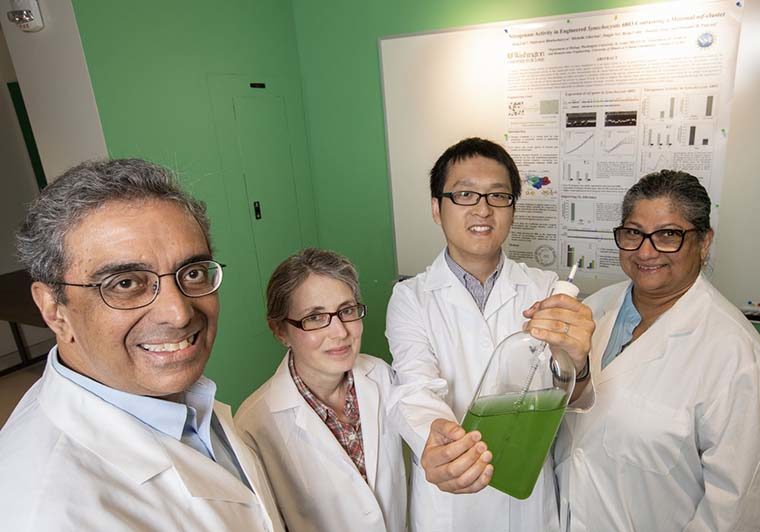 Creating fertilizer is energy intensive, and the process produces greenhouse gases that are a major driver of climate change. And it's inefficient. Fertilizing is a delivery system for nitrogen, which plants use to create chlorophyll for photosynthesis, but less than 40 percent of the nitrogen in commercial fertilizer makes it to the plant.

After a plant has been fertilized, there is another problem: runoff. Fertilizer washed away by rain winds up in streams, rivers, bays and lakes, feeding algae that can grow out of control, blocking sunlight and killing plant and animal life below.

However, there is another abundant source of nitrogen all around us. The Earth's atmosphere is about 78 percent nitrogen, and the Pakrasi lab in the Department of Biology just engineered a bacterium that can make use of that atmospheric gas -- a process known as "fixing" nitrogen -- in a significant step toward engineering plants that can do the same.

The research was rooted in the fact that, although there are no plants that can fix nitrogen from the air, there is a subset of cyanobacteria (bacteria that photosynthesize like plants) that is able to do so. Cyanobacteria can do this even though oxygen, a byproduct of photosynthesis, interferes with the process of nitrogen fixation.

The bacteria used in this research, Cyanothece, is able to fix nitrogen because of something it has in common with people.

"Cyanobacteria are the only bacteria that have a circadian rhythm," Pakrasi said. Interestingly, Cyanothece photosynthesize during the day, converting sunlight to the chemical energy they use as fuel, and fix nitrogen at night, after removing most of the oxygen created during photosynthesis through respiration.

The research team wanted to take the genes from Cyanothece, responsible for this day-night mechanism, and put them into another type of cyanobacteria, Synechocystis, to coax this bug into fixing nitrogen from the air, too.

To find the right sequence of genes, the team looked for the telltale circadian rhythm. "We saw a contiguous set of 35 genes that were doing things only at night," Pakrasi said, "and they were basically silent during the day."

The team, which also included research associate Michelle Liberton, former research associate Jingjie Yu, and Deng Liu manually removed the oxygen from Synechocystis and added the genes from Cyanothece. Researchers found Synechocystis was able to fix nitrogen at 2 percent of Cyanothece. Things got really interesting, however, when Liu, a postdoctoral researcher who has been the mainstay of the project, began to remove some of those genes; with just 24 of the Cyanothece genes, Synechocystis was able to fix nitrogen at a rate of more than 30 percent of Cyanothece.

"This means that the engineering plan is feasible," Pakrasi said. "I must say, this achievement was beyond my expectation."

The next steps for the team are to dig deeper into the details of the process, perhaps narrow down even further the subset of genes necessary for nitrogen fixation, and collaborate with other plant scientists to apply the lessons learned from this study to the next level: nitrogen-fixing plants.

Crops that can make use of nitrogen from the air will be most effective for subsistence farmers -- about 800 million people worldwide, according to the World Bank -- raising yields on a scale that is beneficial to a family or a town and freeing up time that was once spent manually spreading fertilizer.

"If it's a success," Bhattacharyya-Pakrasi said, "it will be a significant change in agriculture."

This research was supported by a $3.7 million grant, awarded by the National Science Foundation and administered by the Washington University International Center for Energy, Environment and Sustainability (InCEES).