An international team of scientists has shown how much sea level would rise if Larsen C and George VI, two Antarctic ice shelves at risk of collapse, were to break up. While Larsen C has received much attention due to the break-away of a trillion-tonne iceberg from it last summer, its collapse would contribute only a few millimetres to sea-level rise. The break-up of the smaller George VI Ice Shelf would have a much larger impact. The research is published in the European Geosciences Union journal The Cryosphere.

Recent, rapid warming in the Antarctic Peninsula is a threat to ice shelves in the region, with Larsen C and George VI considered to have the highest risk of collapse. Because these large ice platforms hold back inland glaciers, the ice carried by these glaciers can flow faster into the sea when the ice shelves collapse, which contributes to sea-level rise. The new study shows that a collapse of Larsen C would result in inland ice discharging about 4 mm to sea level, while the response of glaciers to George VI collapse could contribute over five times more to global sea levels, around 22 mm.

“These numbers, while not enormous in themselves, are only one part of a larger sea-level budget including loss from other glaciers around the world and from the Greenland, East and West Antarctic ice sheets. Taken together with these other sources, the impacts could be significant to island nations and coastal populations,” explains study-author Nicholas Barrand, a glaciologist at the University of Birmingham in the UK. He adds: “The Antarctic Peninsula may be seen as a bellwether for changes in the much larger East and West Antarctic ice sheets as climate warming extends south.”

Warming in the Antarctic Peninsula led, in 2002, to the dramatic collapse of Larsen B, an ice shelf just north of Larsen C. Unprecedented in its size, almost the entire ice shelf broke up in just over two weeks after being stable for the last 10,000 years.

“Larsen C is the most northerly remaining large ice shelf, therefore subject to the warmest temperatures, and the likeliest candidate for future collapse. George VI is further west and south, in a slightly cooler climate, but is still vulnerable to a warming atmosphere and ocean,” says lead-author Clemens Schannwell, who conducted the work while at the University of Birmingham and the British Antarctic Survey.

Rift propagation along the Larsen C Ice Shelf. This rift, which led to the calving of an iceberg twice the size of Luxembourg last year, raised questions about the future stability of Larsen C Ice Shelf in a warming world. 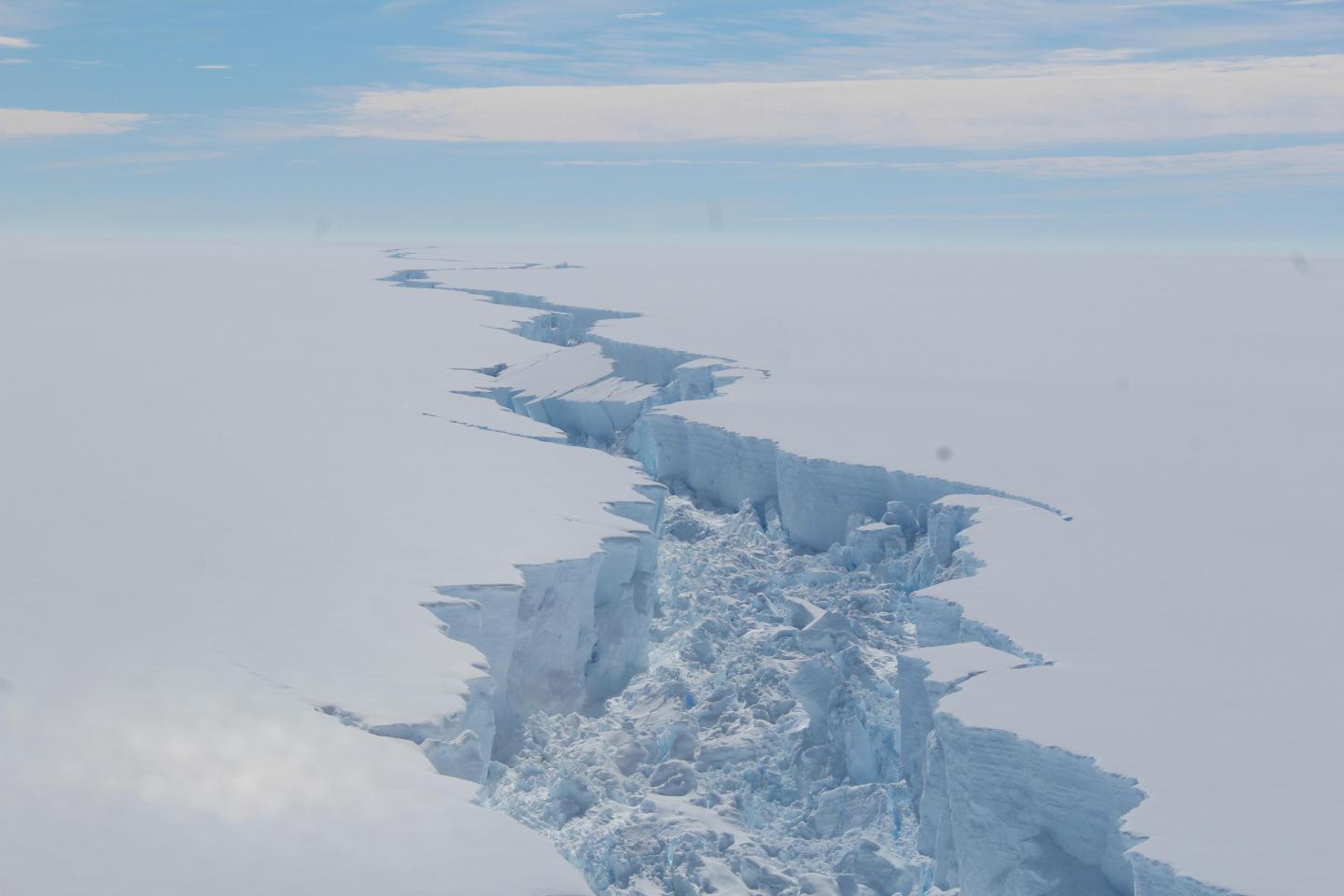 Last summer, an iceberg twice the size of Luxembourg broke away from Larsen C. But despite the recent attention on this ice shelf, the team found its future collapse would have a modest effect on global sea level. By using computer models to simulate the interactions between the Antarctic Peninsula ice sheet and the ice shelves, the team found that the glacier response to collapse of Larsen C would add up to 2.5 mm to sea level by 2100 and 4.2 mm by 2300.

“The vulnerability to change at George VI Ice Shelf and the possible sea level implications from these changes, are far greater,” says Schannwell. Sandwiched between the Antarctic Peninsula and Alexander Island, George VI Ice Shelf is, at 24,000 square kilometers, around half the size of Larsen C. But it would contribute far more to sea-level rise because it is fed by larger glaciers and is very effective at holding back the ice that drains into it from these glaciers. According to the simulations presented in the new The Cryosphere study, adjustment of the glaciers flowing into it following a collapse could contribute up to 8 mm to global sea levels by 2100 and 22 mm by 2300.

George VI Ice Shelf, occupying the sound between the English coast of the southern Antarctic Peninsula and Alexander Island. This study highlights the importance of this ice shelf for regulating the flow of inland ice in the southern peninsula, and therefore for global sea-level rise. 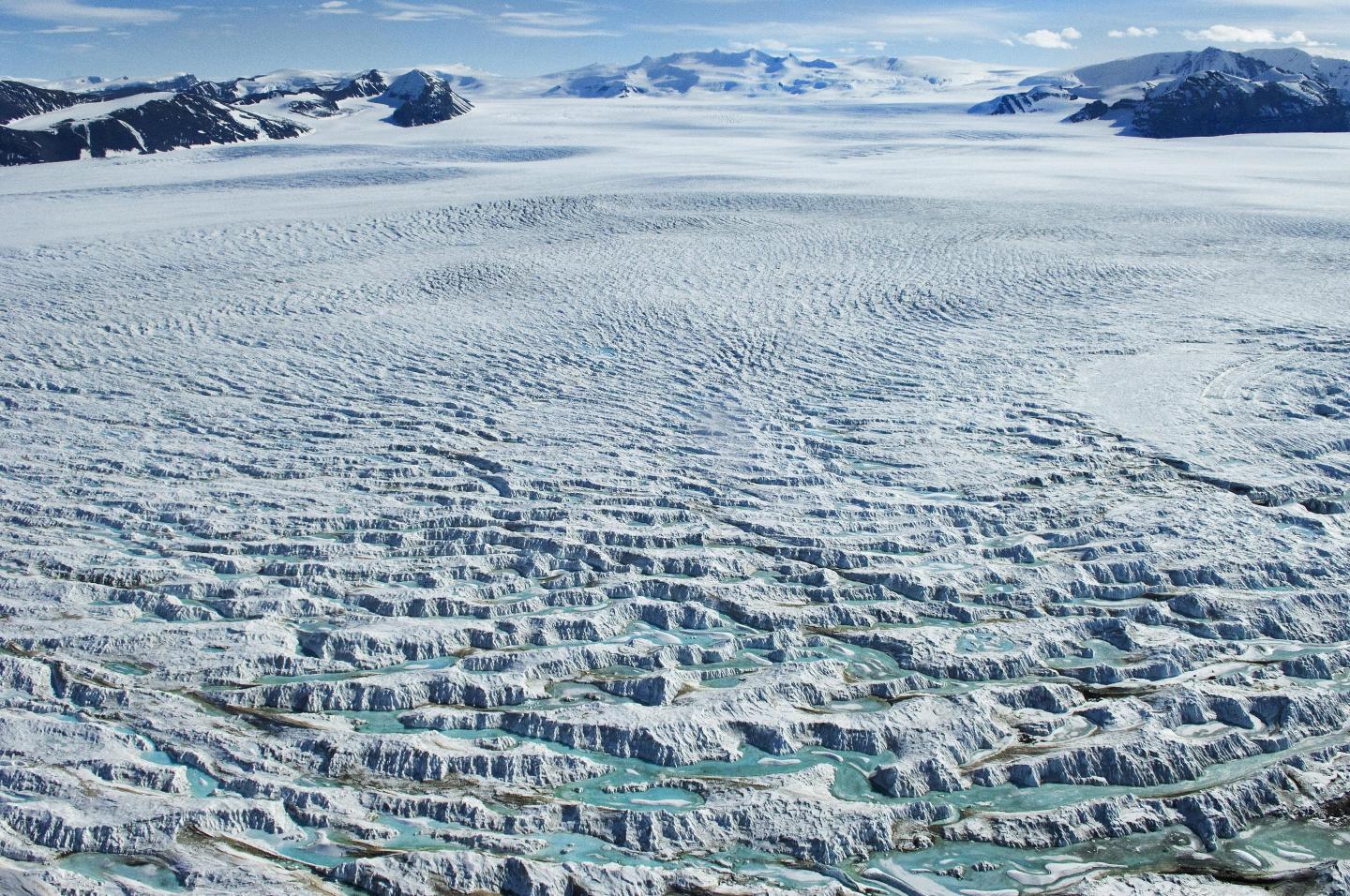 “Prior to our work, we didn’t know what would happen to the upstream ice in the Antarctic Peninsula if these shelves were to be lost. This could have important implications for the local environment and for global sea levels, information that is essential for climate-change mitigation planning and policy,” says Schannwell, who is now at the University of Tübingen in Germany.

“In light of the increasing temperatures projected for the coming century, the Antarctic Peninsula provides an ideal laboratory to research changes in the integrity of floating ice shelves. This region can tell us about ice shelf processes and allow us to observe the response of inland ice to ice-shelf changes. We should view these dramatic changes in the Antarctic Peninsula as a warning signal for the much larger ice sheet-ice shelf systems elsewhere in Antarctica with even greater potential for global sea-level rise.” concludes Barrand.