Elastomeric composites can flex, grip, release, or rotate when exposed to lasers, diffuse light or sunlight

Researchers at Tufts University School of Engineering have developed magnetic elastomeric composites that move in different ways when exposed to light, raising the possibility that these materials could enable a wide range of products that perform simple to complex movements, from tiny engines and valves to solar arrays that bend toward the sunlight. The research is described in an article published today in the Proceedings of the National Academy of Sciences.

In biology, there are many examples where light induces movement or change - think of flowers and leaves turning toward sunlight. The light actuated materials created in this study are based on the principle of the Curie temperature - the temperature above which certain materials will change their magnetic properties. By heating and cooling a magnetic material, one can turn its magnetism off and on. Biopolymers and elastomers doped with ferromagnetic CrO2 will heat up when exposed to laser or sunlight, temporarily losing their magnetic properties until they cool down again. The basic movements of the material, shaped into films, sponges, and hydrogels, are induced by nearby permanent or electromagnets and can exhibit as bending, twisting, and expansion.

A film deflects from a magnetic field when exposed to light. 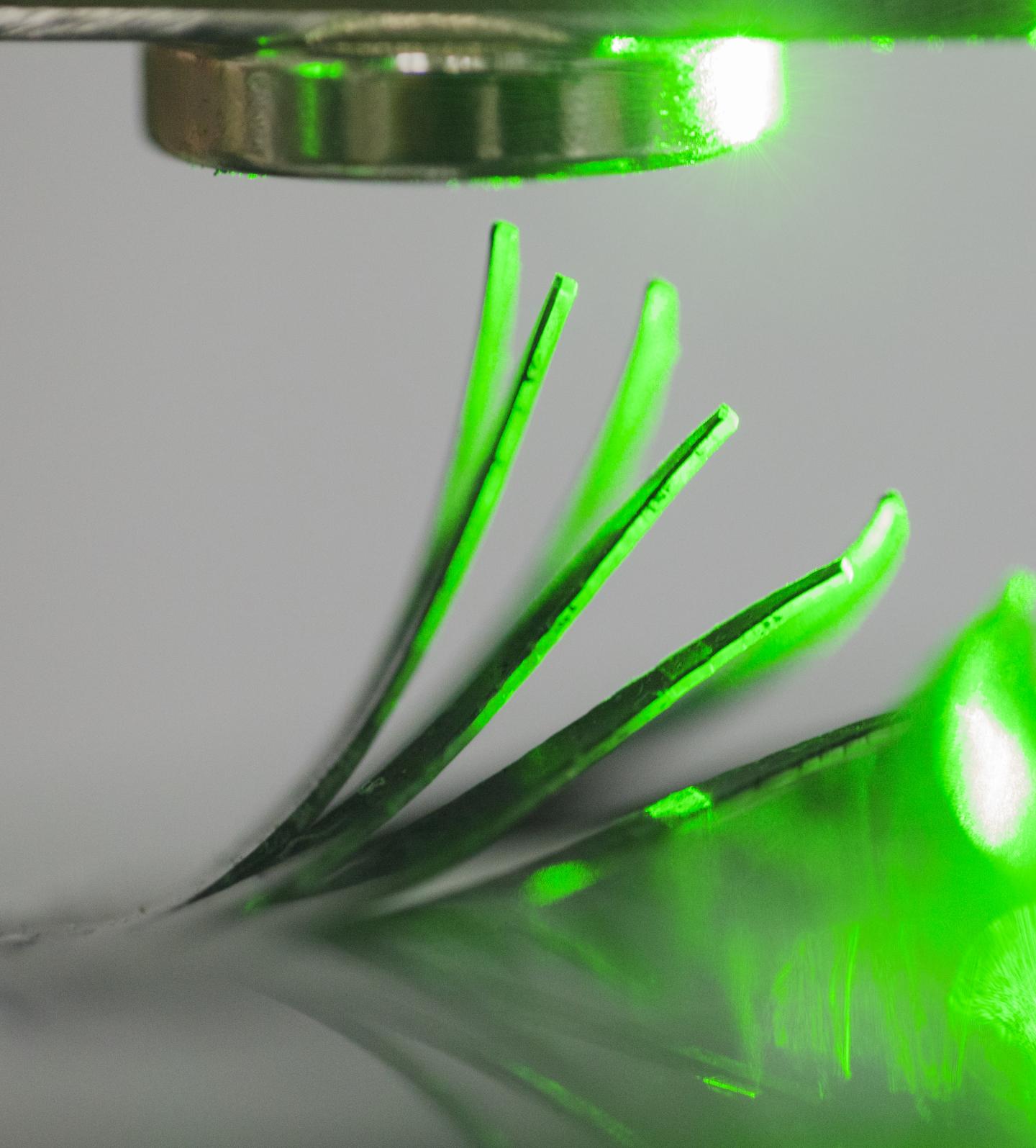 "We could combine these simple movements into more complex motion, like crawling, walking, or swimming," said Fiorenzo Omenetto, Ph.D., corresponding author of the study and the Frank C. Doble Professor of Engineering in the School of Engineering at Tufts. "And these movements can be triggered and controlled wirelessly, using light."

Omenetto's team demonstrated some of these complex movements by constructing soft grippers that capture and release objects in response to light illumination. "One of the advantages of these materials is that we can selectively activate portions of a structure and control them using localized or focused light," said Meng Li, the first author of the paper, "And unlike other light actuated materials based on liquid crystals, these materials can be fashioned to move either toward, or away from the direction of the light. All of these features add up to the ability to make objects large and small with complex, coordinated movements."

To demonstrate this versatility, the researchers constructed a simple "Curie engine". A light actuated film was shaped into a ring and mounted on a needle post. Placed near a permanent magnet, when a laser was focused onto a fixed spot on the ring, it locally demagnetizes that portion of the ring, creating an unbalanced net force that causes the ring to turn. As it turns, the demagnetized spot regains its magnetization and a new spot is illuminated and demagnetized, causing the engine to continuously rotate.

Materials used to create the light actuated materials include polydimethylsoloxane (PDMS), which is a widely used transparent elastomer often shaped into flexible films, and silk fibroin, which is a versatile biocompatible material with excellent optical properties that can be shaped into a wide range of forms - from films to gels, threads, blocks and sponges.

"With additional material patterning, light patterning and magnetic field control, we could theoretically achieve even more complicated and fine-tuned movements, such as folding and unfolding, microfluidic valve switching, micro and nano-sized engines and more," said Omenetto.