A team of international researchers led by engineers at Washington University in St. Louis has seen the light and now has a lasing system that produces “good vibrations.”

In doing so, they are the first research group to broaden what is called a laser linewidth in the phonon laser and steer it through a physical system known as the “exceptional point.” 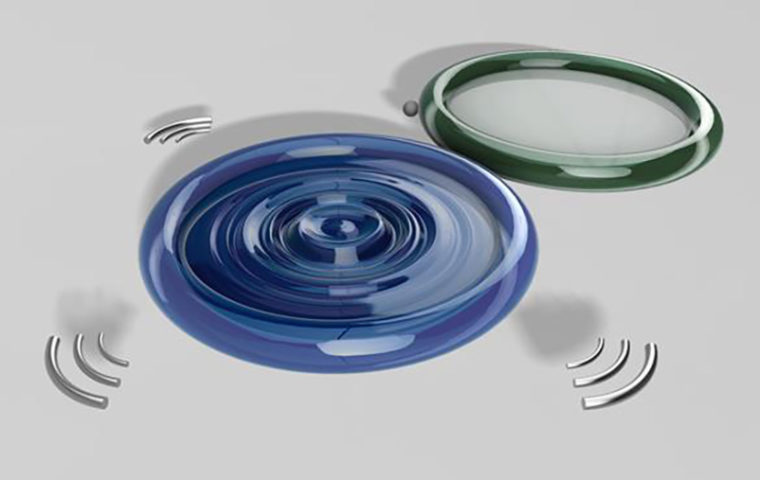 Linewidth is a key component of lasing, showing the physical integrity of the lasing signal as well as the measure of usually unwanted noise in the laser.

The study, which involved collaborators from China, Austria, Japan and Michigan, was published in the July 9, 2018, issue of Nature Photonics.

“We’ve shown that you can use a light field to trigger the mechanical movement that will generate an acoustic (sound) wave,” said Lan Yang, the Edwin H. & Florence G. Skinner Professor of Electrical & Systems Engineering in the School of Engineering & Applied Science.

“Think of phonon lasing as a counterpart to traditional optic, or photon lasing, with exciting applications in medical surgery, materials science and communications. We have demonstrated a controllable phonon laser that can be tuned for threshold and linewidth, among other potential parameters.

“Our study for the first time provides direct evidence that exceptional point-enhanced optical noises can be transferred directly to mechanical noises,” Yang said.

Yang’s laser, an acronym for light amplification by stimulated emission of radiation, belongs to a category called whispering gallery mode resonators (WGM), which work like the famous whispering gallery in St. Paul’s Cathedral in London, where someone on the one side of the dome can hear a message spoken to the wall by someone on the other side. Unlike the dome, which has resonances or sweet spots in the audible range, the sensor resonates at light frequencies and now at vibrational or mechanical frequencies.

Picture the two WGM microresonators set closely to each other in a field with two photon detectors connected by a wave guide which brings light in and out of the system. Call these two “super modes” Resonator 1 and Resonator 2.

“In the first resonator, which supports photons and produces phonons, we know when the light field is strong enough the radiation will trigger the mechanical oscillation related to the acoustic wave vibration,” Yang said. “We calibrated the acoustic wave frequency at 10 megahertz. Then we adjusted the gap between the two resonators to look at the transmission spectrum of the coupled resonators. When we changed the gap, we found that we could tune the spectral distance. We tuned it from 100 megahertz, to 80 to 50 depending on the physical gap between the resonators. If you tune the gap nicely to match the spectral distance between the two to the frequency of the mechanical vibration, then you have resonance.”

Resonance is the phenomenon whereby an external force from a system causes another system to oscillate at certain frequencies.

The two light fields have two different frequencies and energy levels. The mechanical frequency of 10 megahertz matches the energy difference between the two super modes. Both resonators support photons, but only one produces phonons.

In future work, Yang intends to study more deeply the energy exchange between the two super modes in phonon lasing and continue to seek surprises at the exceptional point.