Missing Bones and Our Understanding of Ancient Biodiversity

Fossils come in many shapes and sizes, ranging from isolated fragments of bones and teeth to complete skeletons.

Palaeontologists face an important question, 'does the quality of fossil skeletons impact our understanding of biodiversity patterns in the past'.

Palaeontologists rely on the fossil record to uncover the hidden pasts of long extinct animal groups.

When fossil specimens are discovered, new species are often named, and over time, we begin to paint a picture of past biodiversity.

However, scientific practises vary, some new species are named from poor material, such as single fragments of bone and teeth, while other species are known from many complete, or partially complete, skeletons.

Mosasaurs are known from thousands of fossils, and they come in many shapes and sizes, including complete skeletons and individual teeth. 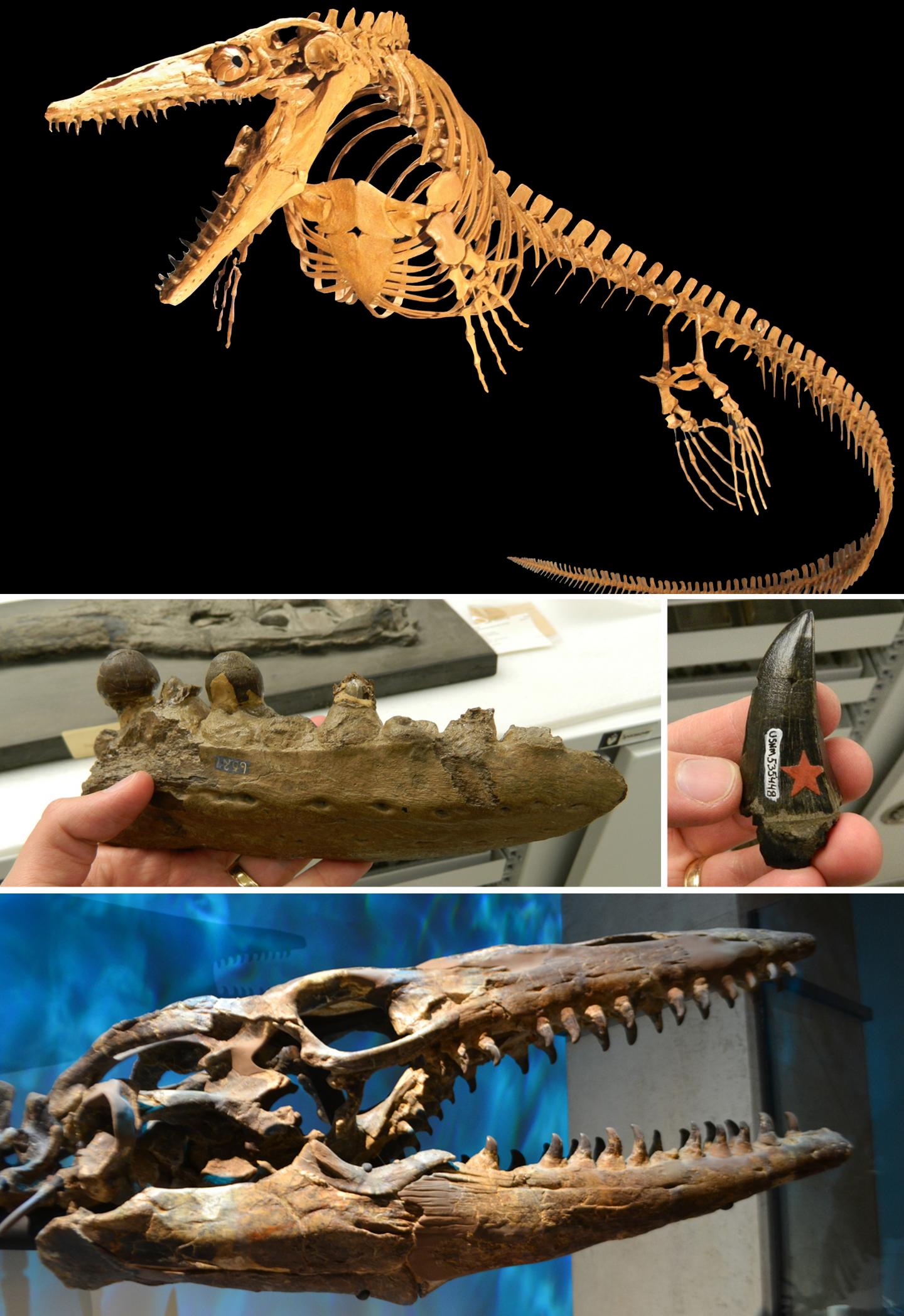 Could it be that our understanding of past biodiversity is simply related to the quality of fossil material in different geological rock formations through time? This question relates to a fundamental debate within palaeontology about the quality and trustworthiness of the fossil record.

In a new paper, researchers from the Universities of Bristol and Leeds analysed fossil specimen quality and tested its relationship with past diversity.

The focus of the study is an ancient group of ocean-going reptiles called mosasaurs.

Mosasaurs were a diverse group of large predatory animals, many were over 15 metres long. Scientists believe that mosasaurs were closely related to snakes and lizards, and they apparently became very diverse in the Late Cretaceous, before disappearing 66 million years ago.

Lead author Dr Dan Driscoll, a Research Associate at the University of Bristol and former MSc Palaeobiology student, said: "Mosasaurs have one of the richest vertebrate fossil records and have attracted study for over two centuries.

"The first mosasaur described was in 1808! Often, studies of fossil record quality have focussed simply on the numbers of fossil species, however, it is important to consider the completeness of individual fossil specimens, and whether this distorts our view of diversity. To do this, robust statistical analysis is required."

The authors examined over 4,000 mosasaur fossil specimens and scored them for the degree of completeness in the largest study of its kind.

Co-author Dr Tom Stubbs added: "Mosasaurs were key players in Late Cretaceous marine ecosystems. Our study confirms that mosasaurs were a successful group of animals that continued to diversify through their evolutionary history, before being abruptly wiped out by the extinction event that also impacted dinosaurs and many other groups."

Co-author Dr Alex Dunhill, from the School of Earth and Environment at the University of Leeds, said: "Palaeontologists often presume that the vertebrate fossil record is heavily biased by sampling. This may be so but, here we show that variation in the completeness of fossil specimens does not appear to bias large scale evolutionary patterns."

The revelations provided by this new study provide new insights into the evolution of mosasaurs, and highlight that, although the fossil record is undeniably incomplete, variable fossil completeness does not appear to bias large scale evolutionary and ecological patterns.