Plastic pollution is a worldwide environmental problem which worsens when this material degrades into smaller-sized particles such as microplastics and nanoplastics, the latter capable of penetrating into an organism's cells.

A research team from the UAB Department of Cell Biology, Physiology and Immunology, the University of Aveiro and the Centro Interdisciplinar de Investigação Marinha e Ambiental (CIIMAR), Portugal, observed how some of these nanoplastics, despite existing in low concentrations, caused damage to the DNA and cell membranes, and produce oxidative stress in the Mytilus galloprovincialis mussel, the most common Mediterranean mussel consumed by humans.

Mussels in the UAB laboratory 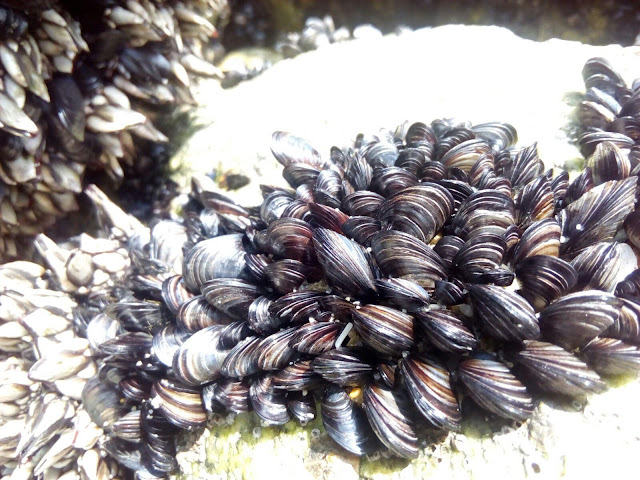 Researchers also were able to observe how nanoplastics can heighten the toxic effects of other contaminants. Among the most common contaminants absorbed by nanoplastics is carbamazepine, a drug that treats seizure disorders. Adding small concentrations (6.3 micrograms per litre) of this drug to the presence of nanoplastics creates an increase in absorption when compared to the drug by itself. The combination of carbamazepine with only 0.05 mg/L of nanoplastics modified the expression of tumour suppressor p53, related to DNA damage repair, in addition to the expression of the aforementioned genes cyp32, hsp70 and lys.

Researchers also observed the physiological effects of nanoplastics starting with only 0.005 mg/L. At this level of concentration the nanoplastics already produced alterations in the activity of the gill's alanine transaminase (ALT), while with 0.05 mg/L damage could be seen in the DNA of the haemolymph (the “blood” of molluscs), in cell membranes, and alterations in the biochemical indicators related to oxidative stress both in gills and in the digestive glands.


“All of these effects caused by nanoplastics take place at low concentrations, and it is therefore important to study the effects of these new contaminants at higher concentrations”, states Irene Brandts, first author of the research, which is the result of her PhD thesis at the UAB Department of Cell Biology, Physiology and Immunology.

Mariana Teles, UAB researcher in charge of the study and also researcher at the University of Aveiro and CIIMAR, highlights the importance of this type of damage in animals, given that “in contrast to the immediate effect of conventional plastic, which for example can kill a turtle if ingested, nanoplastics have a sub-lethal effect, with more long-term consequences”.

With regard to the possible effects upon consuming mussels, the most common seafood consumed in Spain, “the research does not contain implications for human health, since there is no evidence that the molecular responses observed in these organisms can pass on to humans when consumed”, explains UAB professor Lluís Tort, co-author of the study.

The research was published in the latest edition of the journal Science of the Total Environment.